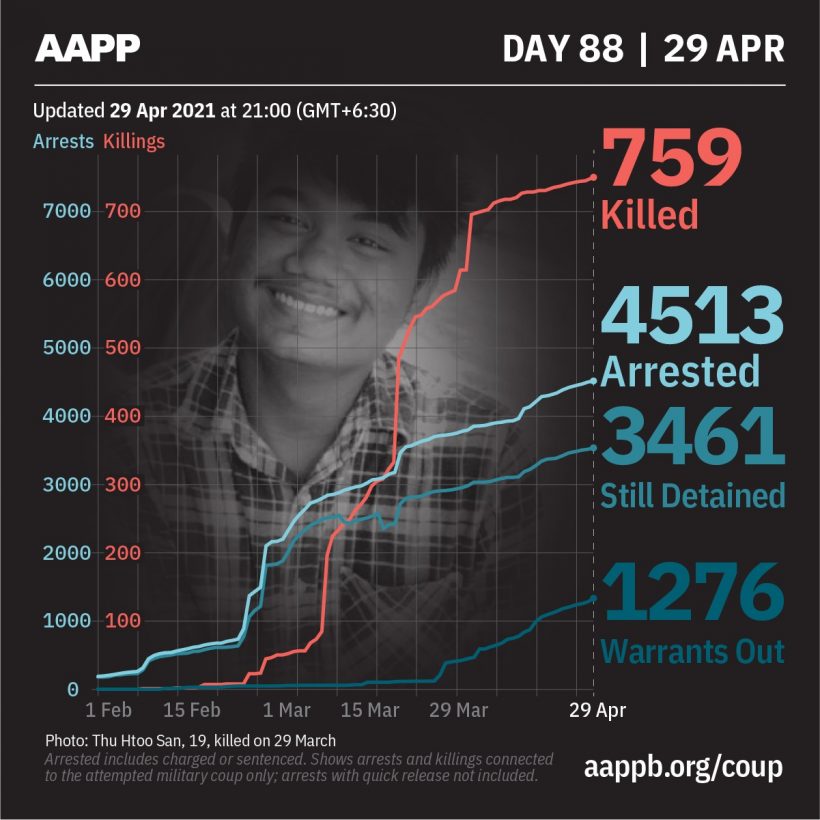 As of 29 April, (759) people are now confirmed killed by this junta coup. The Assistance Association for Political Prisoners (AAPP) compiled and documented (3) fallen heroes today. (1) from Pyapon Township in Ayeyarwady Region died on 29 April. (2) from Mandalay and Kani Township in Sagaing Region were killed previous days and documented today. This is the number verified by AAPP, the actual number of fatalities is likely much higher. We will continue adding as and when.

As of April 29, a total of (3461) people are currently under detention; of them (80) are sentenced. 1276 have been issued arrest warrants; of them 20 were sentenced to death and 14 to three years imprisonment with hard labour, who are evading arrest. We are verifying the recently released detainees and continuing to document.

Today people across Burma continued to protest in different ways against the military coup despite the brutal crackdowns and repressions. This morning, plain clothes junta forces in private cars armed with guns in ShweBo Town, Sagaing Region, crashed into the main protest group. Junta forces threatened, swearing, at the protesters. Thereafter, one woman from the strike was arrested.

Arrests are being made in private cars, not military trucks or police cars. This is because the terrorists are attempting to cover up their acts of violence, and make it more difficult for civilians to report on the junta’s actions because they are using private vehicles. Last night, a night protest was cracked down on and one civilian got shot on his thigh in Pyigyidagun Township, Mandalay Region. Terrorists are committing unlawful shootings and killings day after day. Last night, a young man was shot in the abdomen and died on the spot near Zegyo Clock Tower on 84 road, Mandalay City. He was trying to run away after the military stopped him for a motorcycle check.

A local man was shot and wounded in the abdomen and arm by the terrorists in Auk Kwin Village, Pyapone Township, Ayeyarwady Region last night and died this morning. In addition to this, two civilians were arrested and detained last night, one of whom died.  The junta forces are becoming more violent each day. Civilians are being treated like enemies. The junta forces were using slingshots and throwing stones at an apartment because they did not turn the lights off after 10 pm, destroying the windows in Mingalar Taung Nyunt Township, Yangon Region.

Daily lives of the civilians are being threatened by the junta through these relentless actions. A group of 50 junta troops in plain clothes and police uniform stormed the house of Ko Zin Maung Phyo’s yesterday in Thayet Chaung Township, Dawei District. The Dawei District Students Union member is evading a Penal Code 505(a) warrant. They broke into the house at night, smashing the doors and destroying everything in the house. The junta troops also seized the farm and land registration papers and all the other documents.

The junta are also targeting arrestees and brutally torturing civilians into confession. Two villagers from a village in Kani township, Sagaing Region, were arrested on April 27. One of them was told to pick up the dead body next day. The body of the fallen villager was found with wounds consistent with torture.

As long as the dictatorship does not end, the security and dignity of civilians will continue to deteriorate. Protest leaders, politicians, and activists are being prosecuted by the junta forces under several laws. Wai Moe Naing, the leader of the Monywa strike, has been charged under seven sections, including the Penal Code Section 505-a, and three more sections, including Penal Code Section 124. The junta has tried to imprison dissidents for as long as possible under various sections of the law. This is the practice of successive dictatorships.