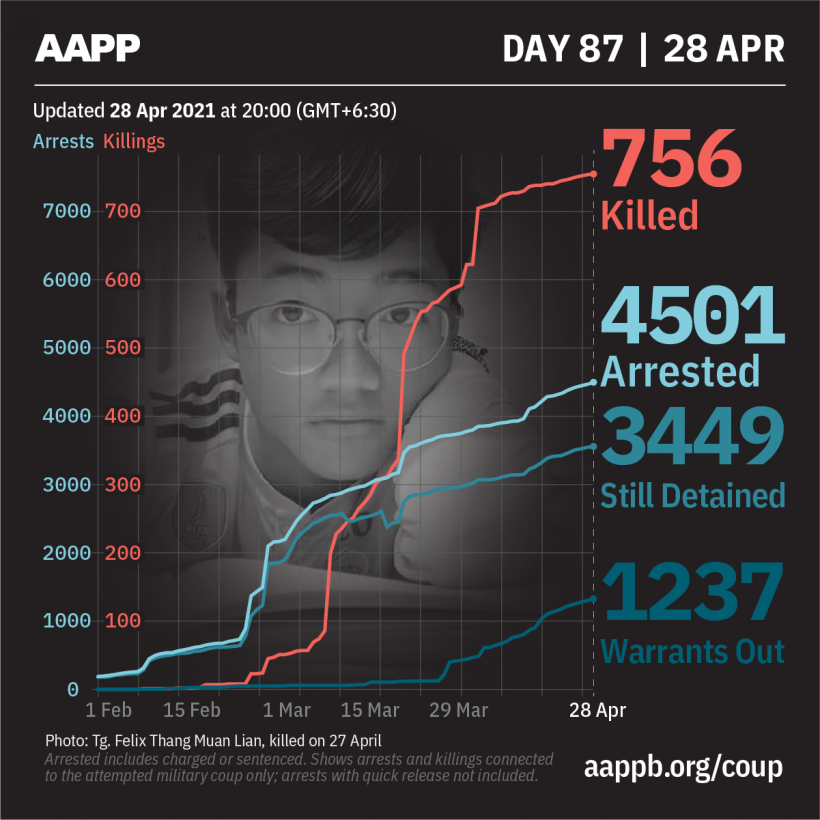 As of 28 April, (756) people are now confirmed killed by this junta coup. The Assistance Association for Political Prisoners (AAPP) compiled and documented (1) fallen heroes today. This (1) fallen hero from Tedim Township in Chin State was killed last night and documented today. This is the number verified by AAPP, the actual number of fatalities is likely much higher. We will continue adding as and when.

As of April 28, a total of (3449) people are currently under detention; of them (79) are sentenced. 1237 have been issued arrest warrants; of them 20 were sentenced to death and 14 to three years imprisonment with hard labour, who are evading arrest. We are verifying the recently released detainees and continuing to document.

Since the ASEAN leaders meeting on 24 April at least 6 people have been killed by the junta. The junta’s pledge to “refrain from violence” should never have been believed by ASEAN. There is only “one party” exercising violence in Burma. Despite the junta’s ongoing violence on a daily basis, the Spring Revolution intensified across the country, including in Yangon and Mandalay.

On April 28, the Yadanarbon and Mandalay University student strikes were attacked by military vehicle and people arrested in Mandalay City, Mandalay Region. Six civilians were arrested, and ordered to raise their hands under the hot sun. The numbers of injured have not been confirmed yet. Since the terrorists arrested Wai Moe Naing, the protest leader of the Monywa strike, by crashing his motorbike, junta forces have continued to crackdown on protests using vehicles and motorbikes. Arrests have continued both day and night using private cars.

A 20-year-old young man was shot dead around 10pm last night in Tedim Township, Chin State and his body has not yet been returned to his family from the hospital. The terrorist group is using different forms of repression to put pressure on public servants involved in the CDM movement. If they can not arrest CDM staff, they take family members as hostage; force them to move from the government housing; firing; or charging and issuing warrants under various laws. Teachers from universities, colleges and management level have been forced to come back to work on 3 May at the latest. Families of Budalin Hospital CDM staff members were forced to move from staff housing in Sagaing Region. CDM participation by the civil servant is having a significant impact on the day-to-day running of the administration mechanism of junta. This is why CDM staff are being targeted.

The  junta coup lifted the FTTH fiber-optic 1 am to 9 am blackout enforced for 72 continuous nights, on 27 April. However, all other internet services are still cut off and the information flow remains restricted. Some social media and news are still banned, for 83 days now. The terrorist group is restricting the flow of information because of the fear civilians will get accurate information and opposition even stronger. The junta is also using Myawaddy TV (MWD) and Myanmar Radio and Television (MRTV) broadcasts to spread its propaganda.  The violation to freedom of press is emblematic of the diminishing human rights in the country.