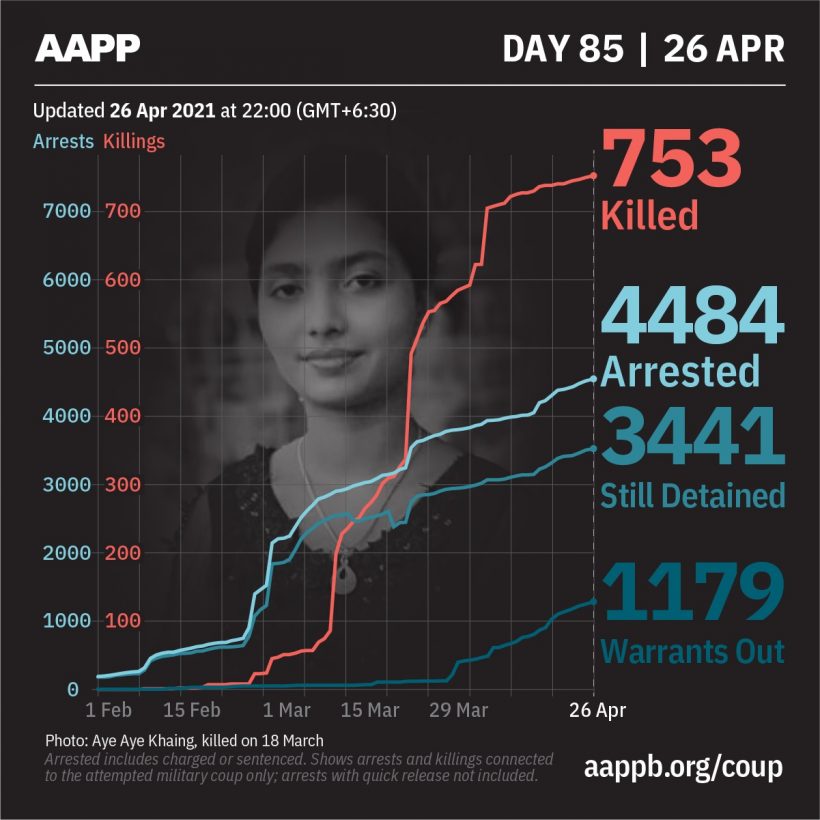 As of 26 April, (753) people are now confirmed killed by this junta coup. The Assistance Association for Political Prisoners (AAPP) compiled and documented (2) fallen heroes today. These (2) fallen heroes from Kawthaung Town in Tanintharyi Region and Insein Township in Yangon Region were killed on previous days and documented today. This is the number verified by AAPP, the actual number of fatalities is likely much higher. We will continue adding as and when.

As of April 26, a total of (3441) people are currently under detention; of them (79) are sentenced. 1179 have been issued arrest warrants; of them 20 were sentenced to death and 14 to three years imprisonment with hard labour, who are evading arrest. We are verifying the recently released detainees and continuing to document.

Today marked 85 days since the attempted coup and over 700 civilians, including women and children, have been killed, and many injured. The number of detentions similarly escalates, it is equally worrying that the accurate condition of detainees is unknown. Protests in defence of democracy continued to erupt across the country.

On April 25, six civilians were beaten and arrested in Mindat Town, Chin State. In response to this, there was a clash between junta forces and civilians, some were killed and injured.

Terrorists have been brutally repressing women and now reportedly oppressing the LGBTIQ communities. On the night of April 24, Yangon Region, in Mingalar Taungnyunt Township, a transgender women was reportedly beaten during her arrest. They were forcing her to wear a Longyi (male dress) whilst mocking her at the same time, AAPP is awaiting confirmation on further details. One’s sexual orientation is their personal choice. Rights and everyone’s existence must be respected. We are worried that LGBTIQ will not only be discriminated but also treated worse compared to others during their arrests because of the barbarity committed by this terrorist group during the coup. We can expect further torture and repression.

The terrorist group has been viciously cracking down on local villages defending themselves, then forcing residents to flee their homes. Thousands of people from around 20 villages in Kani and Yinmabin Township, Sagaing Region have fled their homes due to the terrorist groups’ actions. Such as arbitrary arrests, detentions, and violent repression. Junta forces were also stationed at monasteries, schools, and villages. Villagers were forced to flee their homes and villages because the military entered the local villages and started arresting, beating, and killing. Some of the villagers who were already sick died while running away from the military.

Burma will be in an even more critical situation if effective action is not taken to combat the crisis. The terrorist group has oppressed people across the country in order to maintain its power. Peace will remain elusive without democracy. There must be a focus on defeating dictatorship in Burma.