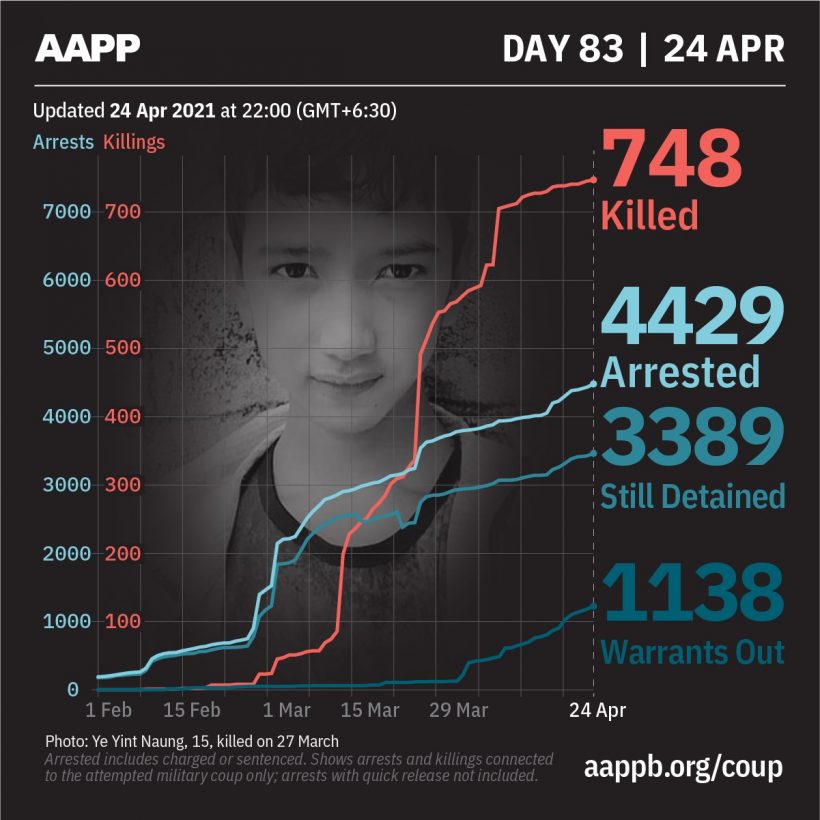 The terrorist leader attended the ASEAN leaders meeting today, claiming legitimacy to the international community whilst killing and injuring peaceful protestors and innocent civilians. The release of political prisoners was not included on ASEAN ‘five points of consensus’ released late evening. All of the arbitrarily detained must be released. At least 1 activist was killed on the day of this meeting, and violations have been systematically perpetrated this past week. If the illegal military does not stop terrorizing its people, then what will ASEAN do.

As of 24 April, (748) people are now confirmed killed by this junta coup. The Assistance Association for Political Prisoners (AAPP) compiled and documented (3) fallen heroes today. (1) from Pyinmana in Naypyitaw died on 24 April. (2) from Loikaw Town in Kayah State and Pyay Town in Bago Region were killed on previous days and documented today. This is the number verified by AAPP, the actual number of fatalities is likely much higher. We will continue adding as and when.

As of April 24, a total of (3389) people are currently under detention; of them (79) are sentenced. 1138 have been issued arrest warrants; of them 20 were sentenced to death and 14 to three years imprisonment with hard labour, who are evading arrest. We are verifying the recently released detainees and continuing to document.

In Naypyidaw today, a young man was killed during a motorcycle demonstration in Pyinmana Township. This morning in Mandalay, plainclothes terrorists were seen using motorbikes looted from civilians to chase after and shoot protestors, a young man was shot in the abdomen.

Also in Mandalay, a young man who set fire to tires was shot in the head and dragged into a car when he could not move. In Dala, Yangon Region, some police and military vehicles chased away youths participating in a motorcycle demonstration.

On 23 April night, in Thaton Town, Mon State. Two men were shot dead for no reason. Yesterday afternoon, in Thapye Aye village close to Myingyan Town, Mandalay Region, the junta went looking to arrest and shoot people, five villagers were injured and one is in critical condition. In Htigyaing Town, Sagaing Region, yesterday afternoon an anti-military activist was arrested and there was a clash between civilians and the junta, two women were injured in the clash.

Persecution is a pattern of this terrorist group, civilians are persecuted daily, in various ways. On 22 April, in Pyay Town, Bago Region, three youths were arrested, the terrorist group returned the dead body of one with wounds across the body consistent with torture. Civilians are being made into an enemy in detention, increasing numbers killed day after day. The right to security and liberty have disappeared under this junta. The terrorists care only about their interests and power.

So-called police and soldiers take property from civilians like bandits. On the night of April 22, in Mogok,  Mandalay Region, junta forces looted 7 million kyat and threatened the neighborhood that whoever posted the case on social media would get shot. On the evening of April 23, they entered a household goods store (which sold fire extinguishers and equipment), in Mandalay and looted.

The post-coup period is getting long, the terrorist group is robbing, destroying property, killings are only intensifying. All sectors of the economy have begun to collapse in response to the political deterioration. People continue to call for meaningful action against the terrorist group, but are still being ignored. The situation for ordinary people is worse than ever.