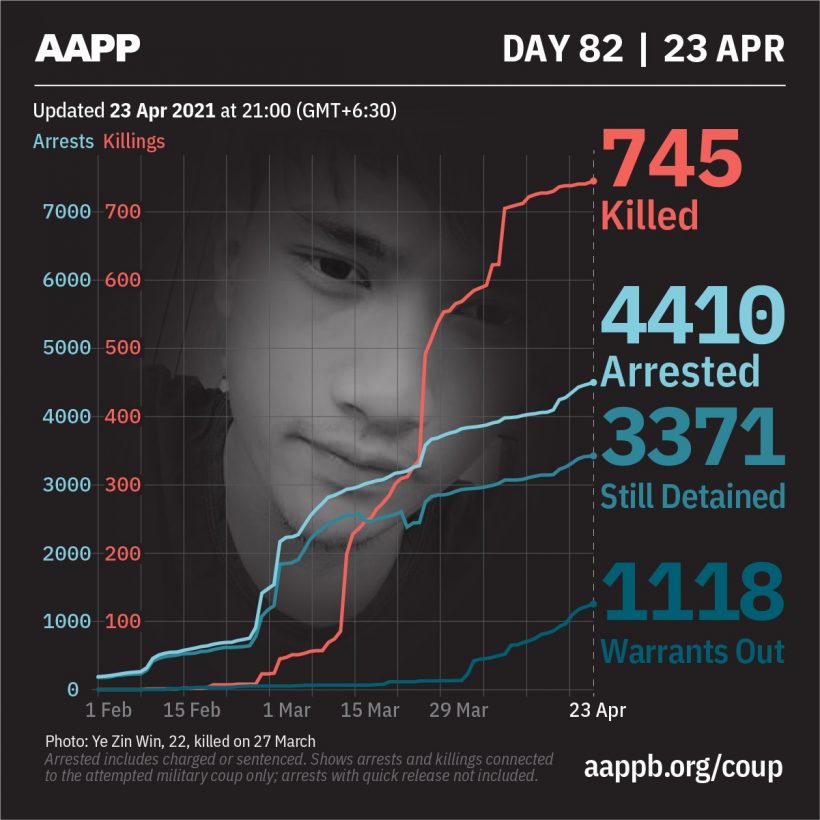 As of 23 April, (745) people are now confirmed killed by this junta coup. The Assistance Association for Political Prisoners (AAPP) compiled and documented (6) fallen hero today. These (6) heroes from Mogok Town in Mandalay Region and Pakokku Town in Magwe Region were killed on previous days but documented today. This is the number verified by AAPP, the actual number of fatalities is likely much higher. We will continue adding as and when.

As of April 22, a total of (3371) people are currently under detention; of them (79) are sentenced. 1118 have been issued arrest warrants; of them 20 were sentenced to death and 14 to three years imprisonment with hard labour, who are evading arrest. We are verifying the recently released detainees and continuing to document.

Nowadays in Burma the terrorists are brutally assaulting anyone who stands against the junta. Women are not spared against the brutality. Females are being systematically tortured, (physically and mentally) sexually assaulted with intent. A 17 year old girl who was released from Shwe Pyi Thar interrogation center, Sanchaung Township, Yangon, said so-called police from no.24 police station verbally assaulted and touched her inappropriately on shoulder then threatened her with his gun. Two other women detained at the same interrogation center in relation to the bombings from Yankin Township where also brutally beaten. One of these women was treated worse and assaulted with a metal pipe. The so-called police sat on her shoulder, pulling her hair, hitting her female organs, she was not given medical treatment. These crimes are a clear violation of human rights, the terrorist group is cruelly torturing women. The junta is not using female officers but mostly male soldiers during questioning. After torture they are not given adequate medical treatment, putting their life at risk even further. The junta is putting the mental and physical security of the female arbitrarily detained at risk of sexual assault at any time. It is creating a climate of fear, sexual assault could happen at any time at these male-only interrogation centers

Burma has ratified the Convention on the Elimination of all forms of Dictrimaton Against Women (CEDAW). It is an international tragedy that these violations are happening inside Burma. The UN Women Organization, human rights groups, including the international community must not ignore us. They should take immediate and stern action for violating CEDAW and protect all women in Burma.

In Bago Region, Pantaung Police Station was set on fire. On 22 April early morning, the junta arrested a 2-year old child, his father and grandfather. So-called police tortured the father and grandfather in front of the 2-year old child, forced to confess to the arson. After this forced confession, the mother came to collect the 2-year old. The mother was then arrested as a conspirator. Some local villagers were also detained and forced to confess through beatings in interrogations.

On 22 April, in Tamu City, Sagaing Region, a male employee of Kanbawza Bank was followed by the junta. When they found 4 walkie talkies in his hut, they brutally beat him to the face, broke his wrist, so that his bone was showing, and lost excessive amounts of blood. He was told to only wear underwear while they threatened him with his life.

Now the terrorist group is torturing and committing increasingly brutal violence, children are not safe, they can be taken as hostages. The junta is trying to break our dignity through violations of human rights, with no rule of law. They commit criminal acts. All civilians including children, women, and the elderly, could be detained. Civilians are helpless, there is no security inside Burma. These are the conditions of life inside Burma under the junta.

Early morning April 23, Kayah State, Loikaw Township, Shan Ward, the junta crackdown on a dawn protest, one man who was running away had to jump into the stream and is currently missing. On April 23 there was also a gunfire clash in Magway region, in Thayet Township, between the terrorists and the people.

The coup leader will attend the 24 April summit. The National Union Government (NUG) has informed Interpol to arrest the coup leader. To bring the continued brutality by this junta to an end, the international community must take immediate action to arrest the terrorist leader.