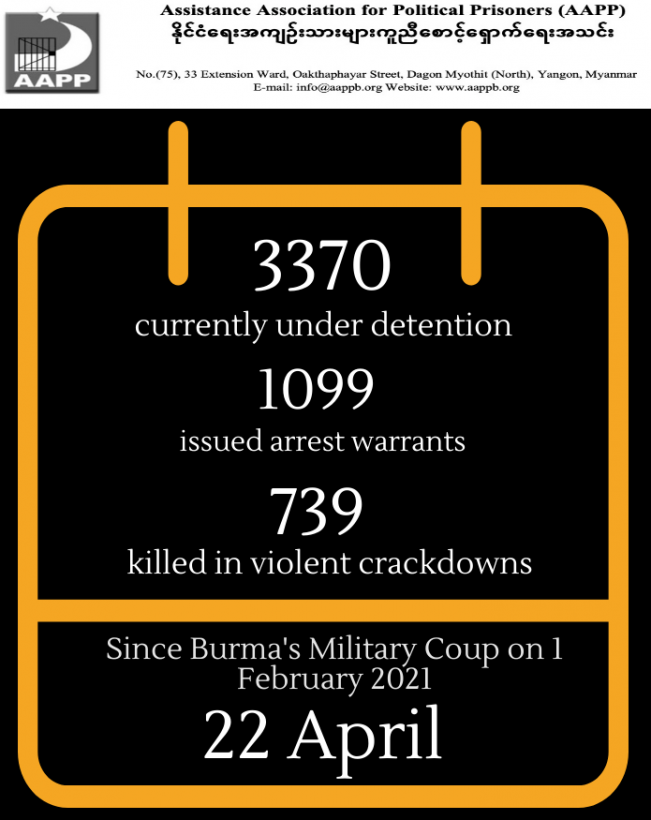 As of 22 April, (739) people are now confirmed killed by this junta coup. The Assistance Association for Political Prisoners (AAPP) has not yet confirmed any fallen heroes today. This is the number verified by AAPP, the actual number of fatalities is likely much higher. We will continue adding as and when.

As of April 22, a total of (3370) people are currently under detention; of them (76) are sentenced. 1099 have been issued arrest warrants; of them 20 were sentenced to death and 14 to three years imprisonment with hard labour, who are evading arrest. We are verifying the recently released detainees and continuing to document.

Today, people across Burma continued to protest the dictatorship. In Myingyan, Mandalay Region on April 22, the main strike was fired upon by the junta forces. The terrorists then detained protestors in Myingyan Town. Last night in Chanmyathazi Township, Mandalay Region a 14 year-old girl and a man were shot and injured in the neighborhood for no reason.

Reports of the junta reportedly calming down on crackdowns. Is nothing of the sort. The junta has continued to repressively try to shut down the internet across the country, and in rural areas where information is now especially difficult to ascertain and document, the junta’s violence is continuing at its normal brutality. This is most likely because of the upcoming ASEAN summit on 24 April, it wants to avoid condemnation and accountability and so is moderating its violence and terror in the more easy to document urban areas.

Terrorist groups continue to arrest political party members, student activists, striking CDM workers, and youth protesters. Warrants are increasing, the junta is putting any and everyone who is against this junta on this list.  In Magwe Region, over 100 CDM oil workers were threatened by the junta into returning back to work. If they did not return to work on April 22 they will be charged under 505(a) of the Penal Code. 2 private hospitals (Sein Thitsar and Sawn Metta) in Bhamo City, Kachin State were threatened by the junta if the 4 doctors involved in CDM give medical treatment there, then the hospital’s  license would be revoked. Through the propaganda media MRTV, the junta said doctors will be prosecuted.

On April 20 evening two CDM teachers from Hpa-An Township were detained in a village they were hiding in. The junta is changing tactics, the terrorists are threatening civilians and civil servants because they realise they cannot govern the country. Civil servants from many and various departments are now being detained, just as the junta is also increasingly issuing arrest warrants. Just like in the 2007 Saffron Revolution, the terrorists are violently arresting monks to maintain power. In Mandalay Region, Mogok, Sayadaw U Yewata (former chairman of ABSFU, formerly called Ye Yint Paing) from Yepu Monastery was beaten and detained last night.

Journalists are now being charged under different sections of the law. In Ayeyarwady Region, a freelance journalist from Myaungmya was arrested last night. In addition, from yesterday the Monywa Gazette announced on their website they will stop operating. The terrorist group is trying to shut down the internet to hide the evidence of their atrocities, again. Information is being suppressed, and yet the media continues to work hard and document the truth to inform Burma’s people.

Last night in Monywa Township, no.3 light infantry battalion chased 3 petrol trucks who passed them by, one driver was shot dead. After 6pm in Mon State, Billin and Thaton Township, the so-called police and military were shooting at anyone who passed by their camps. Civilians are too frequently injured and killed in Burma nowadays, after nearly 3 months the people continue to endure atrocities. If this dictatorship gets stronger, democracy will disappear. We must end the history of dictatorships in Burma to ensure democracy and human rights for all. For this movement to succeed we must have internal strength but also more substantial international support.