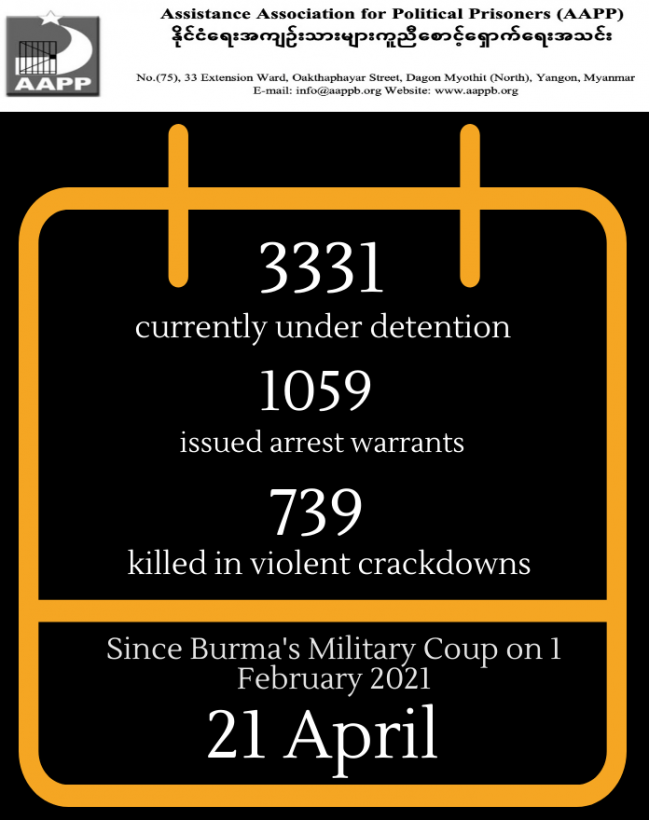 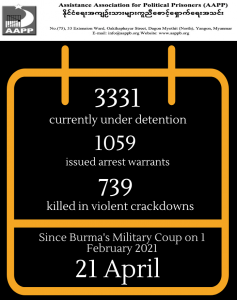 As of 21 April, (739) people are now confirmed killed by this junta coup. The Assistance Association for Political Prisoners (AAPP) compiled and documented (1) fallen hero today. This (1) hero from Myaung Township in Sagaing Region was killed the previous day and documented today. This is the number verified by AAPP, the actual number of fatalities is likely much higher. We will continue adding as and when.

As of April 21, a total of (3331) people are currently under detention; of them (76) are sentenced. 1059 have been issued arrest warrants; of them 20 were sentenced to death and 14 to three years imprisonment with hard labour, who are evading arrest. We are verifying the recently released detainees and continuing to document.

On April 21, “Blue Shirt Day 2021”, in honour of the seventh anniversary of the death of prominent journalist U Win Tin, protesters in Burma and many and all people inside and outside of the country, wore a blue shirt to stand with all political prisoners still detained in Burma. Political prisoners, those disappeared and in-hiding continue to increase. The situation for those detainees, their access to court – medical treatment – and fair trial is deprived. On this Blue Shirt Campaign Day, AAPP urges the international community including ASEAN to take action to ensure immediate release of all the political prisoners in Burma again.

Today, sound grenades and live ammunition was used against the Dawei Strike in Tanintharyi Region. Five people including a 16-years old student were beaten and arrested. Among the arrested five, one youth was reportedly injured by a bullet shot, emergency treatment for him is clearly needed. The junta makes people who peacefully oppose them into enemies. They don’t even give medical treatment, increasingly civilians are dying from this. A main strike in Launglon town, Tanintharyi Region was also crackdown on. Two motorbikes were reportedly stolen by the junta forces, but no confirmed arrests yet.

Yesterday, 200 terrorist troops took a military base between Thee Kone village in Yinmar Pin Town and Kapine village in Sagaing Region. Local residents opposed to this troop base waged a defence clash in which five villagers were killed as initially reported, further confirmation is being investigated. The junta reportedly used drones to scout the villages before using heavy artillery.

The terrorists raid houses and take people as hostages. On April 19, two NLD members of Kyaukse Township, Mandalay Region, were searched for in their homes. The two were evading arrest. So, the junta detained both of their eldery fathers (one of whom is visually impaired). A CDM teacher charged with Section 505(a) and evading arrest in Thanbyuzayat town in Mon State was searched for on April 19, three family members were found and taken as hostages. Such hostage taking is a serious crime committed by the junta to indoctrinate a climate of fear. The terrorists oppress in many ways, unarmed civilians defy this oppression in peaceful protests/CDM – to destroy the dictator’s governance. Several innocents have sacrificed their lives. The international community must take whatever action is necessary.