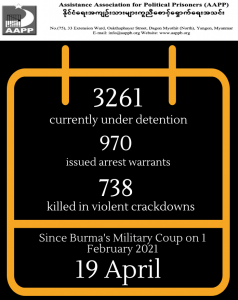 As of 19 April, (738) people are now confirmed killed by this junta coup. The Assistance Association for Political Prisoners (AAPP) compiled and documented (1) fallen hero today. This (1) hero from Htone Bo Town in  Pandaung Township, Bago Region was killed the previous day and documented today. This is the number verified by AAPP, the actual number of fatalities is likely much higher. We will continue adding as and when.

As of April 19, a total of (3261) people are currently under detention; of them (75) are sentenced. 970 have been issued arrest warrants; of them 20 were sentenced to death and 14 to three years imprisonment with hard labour, who are evading arrest. We are verifying the recently released detainees and continuing to document.

Today at 8pm YGN time, junta propaganda MWD said the Assistance Association for Political Prisoners was spreading fake news. AAPP is giving an accurate, verified, representation of the brutality of this illegal junta.

Despite the inhumanity of torture, the junta in Burma has done it every single day since the attempted coup. Verified photos of six youths who were tortured after being arbitrarily accused and arrested for a bombing in Yankin township, Yangon Region went viral on social media. Such overt displays by the junta’s propaganda media reveal the inhumanity and notorious persecution in clear violation of international human rights laws and conventions, but in particular it is supposed to threaten people protesting for democracy of similar fates. Medical treatment is urgently needed for these respected youths. The consequences of these interrogations by the junta is extremely worrying.

Terrorist troops passed by in front of a hotel with sailors returning to Burma, junta forces entered hotel rooms after allegedly hearing the banging of pots and pans, two sailors were assaulted, one had broken ribs, the other is reported to have gashed his eyebrows. The terrorists also robbed $1,500 from a sailors wages. AAPP strongly denounces such brutality, and we urge the UN, international community, including ASEAN, to take effective action as quickly as possible.

Today, people across Burma continued to protest against the dictatorship with various marches. At the General Dawn Strike in Mandalay City, a frontliner was attacked by a car and the General Dawn Strike shot with rubber bullets, tear gas and live ammunition. 11 people were beaten and arrested  and a victim was reported to have been injured in a car attack.

This morning, two motorcycle strikes in Mandalay were rammed by a vehicle, one girl was crushed, another was injured by a bullet and more than 10 people were beaten and arrested.  It is a serious situation when a terrorist group has repeatedly over the last few days been crashing into, to detain protestors in unmarked vehicles. Today, in Mohnyin town, Kachin State a strike was repressed, and two people, including a female university student, were arrested.

People-made barricades were burned down in Nanataw Ward in Loikaw Township, Kayah State and the junta opened fire with live ammunition, and two young men were arrested. In Myin Gyan Town, Mandalay Region, the most tenacious fort in Ward 6 was brutally crackdown, the junta made it like a conflict zone with surface to air missiles and heavy artillery since April 18 evening.  Six people, including a 13-year-old child, were reported to have been arrested, although some local residents who resisted were not wounded.

The No.6 Ward barricade, demolished yesterday, was rebuilt by locals but then stormed again by large numbers of terrorists this morning. Two local residents were injured, one is reportedly in  serious condition. The junta troops also went door-to-door searching for people; thousands of residents from No.6 Ward have fled to nearby villages. Homes and neighborhoods in Ward 3 and 4 were also violently raided, motorcycles were burnt down in No.4 Ward.

In Kani township, Sagaing Region, more than seven villages fled due to the terrorist operation by the junta. Yesterday afternoon, large numbers entered Chung ma village, in Kani township, where junta troops searched door-to-door and stole food. Military vehicles arrived last night and shot randomly, forcing children and adults to flee. As a result of the junta’s forces’ arbitrary raids and shooting, residents are no longer safe even in their communities and face danger everywhere at any time.

This morning, the junta troops opened and destroyed tombs at the Sin Phyu Kwin Cemetery, which had cremated fallen heroes from the Spring Revolution in Bago City. Bodies were removed and laid outside. A new tomb has not yet been created, terrorists have no respect for the dignity of those fallen with these disgusting acts.

Burma’s transition to democracy, supposed to promote peace, national reconciliation and democracy, was destroyed by the coup. Abolishing the junta is the only solution to building a fully democratic society for the people.