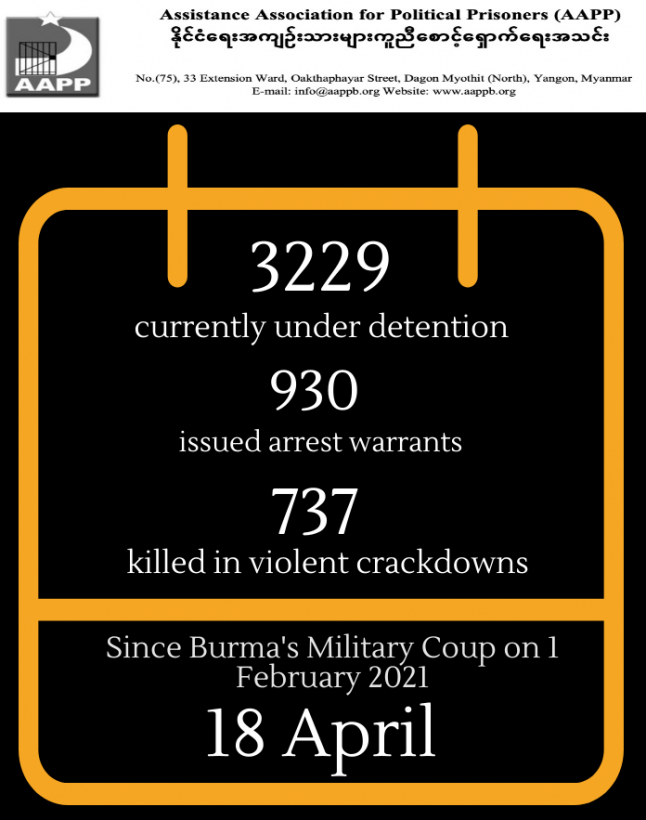 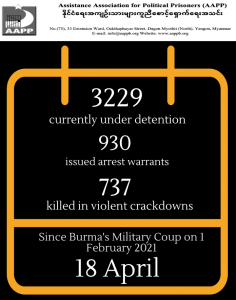 As of 18 April, (737) people are now confirmed killed by this junta coup. The Assistance Association for Political Prisoners (AAPP) compiled and documented (7) fallen heroes today. These (7) heroes from Kani Township in Sagaing Region and Kyaukme Town in Shan State were killed the previous days and documented today. This is the number verified by AAPP, the actual number of fatalities is likely much higher. We will continue adding as and when.

As of April 18, a total of (3229) people are currently under detention; of them (75) are sentenced. 930 have been issued arrest warrants; of them 20 were sentenced to death and 14 to three years imprisonment with hard labour, who are evading arrest. We are verifying the recently released detainees and continuing to document.

All across the country today, various protests against junta were carried out. On 18 April, junta crackdowns may have appeared calmer but in Myingyan City, Mandalay Region, the junta fired at young protestors, a man inside a house and shot and seriously injured.

On April 17 nighttime, in Larpo village, Kani Township, Sagaing Region, protestors defending themselves from junta forces attacks were shot at, 2 protestors were shot dead. Last night at around 9pm in Kyaukme Town, Shan State,  3 young boys riding a motorbike were fired at by the junta, one was shot dead in the head, the 2 others detained.

In Yangon, Yankin and other townships, explosions were set off yesterday. After the explosions, from last midnight up until noon today the junta raided Yankin Township, and arbitrarily assaulted and detained 30 women and youths. In most of the wards in Myeik City, Tanintharyi Region, the junta has been randomly throwing sound grenades throughout the night, attempting to continue its climate of fear.

On 16 April, the junta searched for an MP, his sister, Daw Nwel Nwel Aung (a lecturer in Botany at West Yangon University), was taken as a hostage from her home in South Okkalapa Township, because junta forces could not find her brother. The junta has continued its policy of hostage taking, just as new tactics of these terrorists emerge. People are not safe, even at home, they can be abducted any time, facing terror every single day.

The junta in Burma is killing, shooting, harassing, looting, assaulting. The generals in Burma only look out for themselves. Innocent civilians are losing their rights to security and dignity, their property is under attack. There is no rule of law, every single corner of the country is repressed. For the uprising to fully succeed, we must ensure accountability for these crimes.