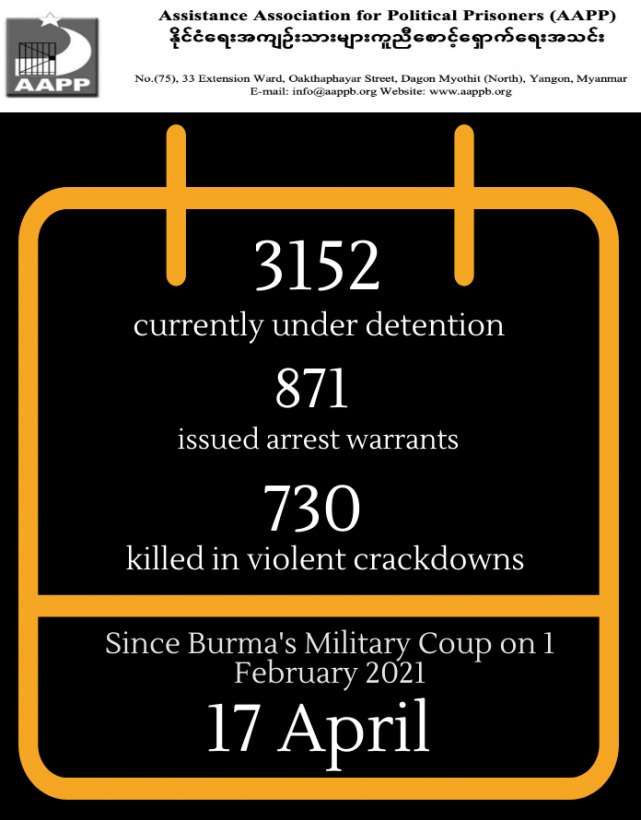 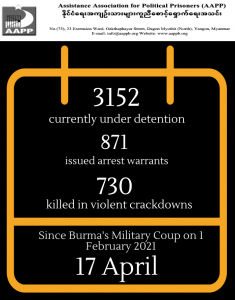 As of 17 April, (730) people are now confirmed killed by this junta coup. The Assistance Association for Political Prisoners (AAPP) compiled and documented (2) fallen heroes today. These (2) heroes from Mogok in Mandalay Region were killed today. This is the number verified by AAPP, the actual number of fatalities is likely much higher. We will continue adding as and when.

As of April 17, a total of (3152) people are currently under detention; of them (75) are sentenced. 871 have been issued arrest warrants; of them 20 were sentenced to death and 14 to three years imprisonment with hard labour, who are evading arrest. We are verifying the recently released detainees and continuing to document.

However, the ABSFU students were due to be released this year anyway. The junta has released mass general prisoners only at New Years, normally they only include political prisoners who have nearly finished their sentences. There are two concerns from this amnesty. One is that the junta is doing this to clear prisons for more democracy supporters, striking workers and anyone else they arbitrarily want. The other worry is that they are trying to create instability.

Also, on February 12, the junta released a similar number of prisoners, soon after there was instability on the streets, fire rings thrown into neighborhoods, fear quickly spread. The junta is trying to show the international community they are not a terrorist group. The fact the junta is releasing such large numbers demonstrates serious concern for the near-future.

On Burmese New Year, across the country, protests endured. At a motorbike protest today in Inn Zauk Village, Launglon Township in Tanintharyi Region, plainclothes junta troops’ in a private vehicle crashed into the protestor at the back of the procession and detained him. Today, in Mandalay Region, Mogok City, the junta attacked and destroyed the barricades, 2 civilians were killed, 4 wounded. The junta commander shouted at the soldiers, caught on video saying “I only want the dead bodies”. Further demonstrating crimes against innocents, all civilians are in danger anywhere, anytime.

Everyday the junta’s violence deteriorates, it is a systematic pattern of crimes against humanity. All people under this junta are being terrorized with heavy weapons and physical assaults, threats. No-one is safe, there is no security, we are living under a climate of fear again. In ethnic areas civilians are continually targeted, including children. On April 12 early morning, a 3-year old and 14-year old were killed in Wah Thoe Kho village, Hpapun District, Karen State. The decades long civil war always has impacted locals most severely, they are made into victims in this conflict by the junta, once again enduring abuse. ASEAN and the international community must take an impactful stand against these crimes against humanity.