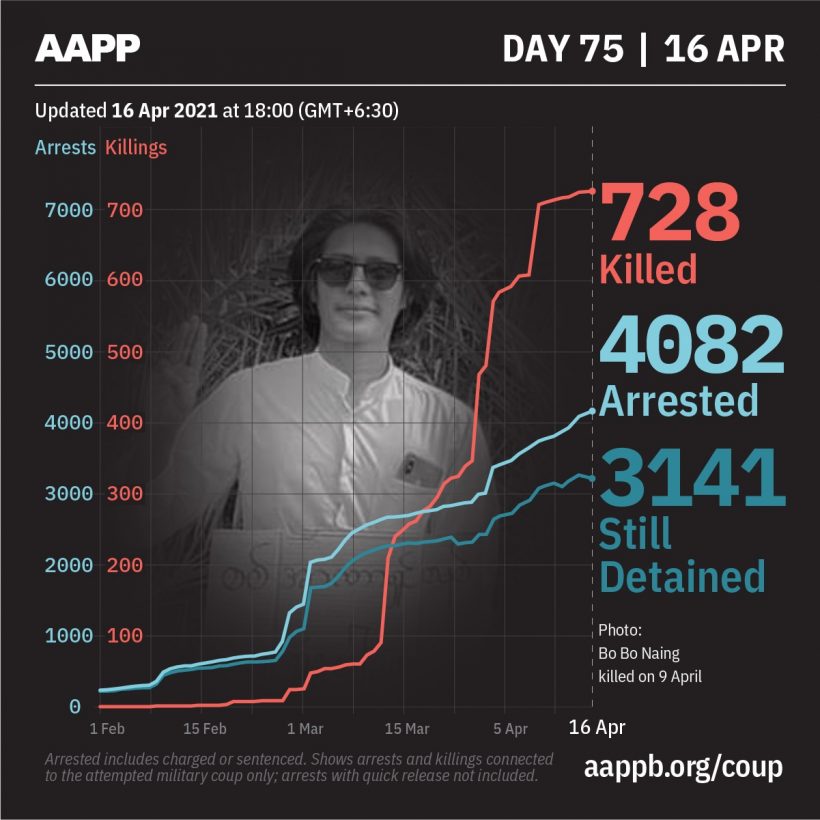 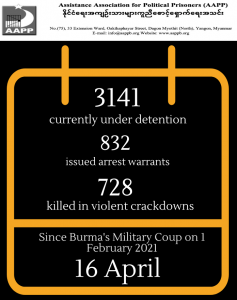 As of 16 April, (728) people are now confirmed killed by this junta coup. The Assistance Association for Political Prisoners (AAPP) compiled and documented (2) fallen heroes today. These (2) heroes were killed yesterday and documented today. This is the number verified by AAPP, the actual number of fatalities is likely much higher. We will continue adding as and when.

As of April 16, a total of (3141) people are currently under detention; of them (75) are sentenced. 58 people including UEC members were released today, and so removed from the under detention list. 832 have been issued arrest warrants; of them 20 were sentenced to death and 14 to three years imprisonment with hard labour, who are evading arrest. We are verifying the recently released detainees and continuing to document.

Today, pictures on social media showed protest leader Ko Wai Moe Naing evidently beaten in detention. His human rights are being violated, he has been tortured, his face beaten and swollen – evidently since arrest. Peaceful protests are attacked, rammed by unmarked cars and detained. There is no rule of law in Burma. Executive Member of Chin National League for Democracy (CNLD), Salai Duh Hu Thang, is being tortured at a military barrack  detention center in Haka, Chin State. AAPP utterly condemns the junta’s actions. International human rights organization, democratic parties, and global governments must take action and condem these human rights violations

On 16 April, around midday in Bago City, the junta crashed into motorbike protesters using private vehicles, going on to steal the motorbikes. Among this protest group, one man and one woman are missing and cannot be contacted.

In Tanintharyi Region, Kan Pauk in Yebyu Township, as a protest march came to an end, the military fired weapons at the fading demonstrations on three occasions.

Yesterday in the evening and at night, the junta brutally cracked down in Myingyan Township, Mandalay Region, and Kani Township, Sagaing Region.

The junta is targeting NLD members, as well as taking family members as hostage. Yesterday, late evening, Salin Township, Magway Region, the junta went into the homes of NLD township executive committee member and treasurer, stealing two motorbikes and money and gasoline canisters. The junta is looting anything of value.

The junta is committing these acts all the time and it is deteriorating day by day. Yesterday at around midday, a woman was stopped on a public road and robbed of 1 million kyat in  North Okkalapa Township, Yangon. Around noon yesterday in Theelone village, Shwebo Township, Sagaing Region, the junta attacked the homes of villagers involved in strikes, detaining 5 people.

We should be rightly concerned about the junta’s continued use of human shields in conflict. In Putao Township, Kachin State, the junta is using local villagers as human shields on the front-line, telling them to bring the dead bodies of junta soldiers, around 50 soldiers forced local villagers to travel with them from Myitkyina to Putao.

This is forced labor, the junta in Burma is using innocent civilians to attempt to get an advantage in conflict. This is a severe violation of international law, and yet another war crime. If action is not taken, these violations will most certainly continue. Human rights are continuously disrespected  by this junta, if these criminal acts are not punished it will only foster impunity for yet even further more violations.