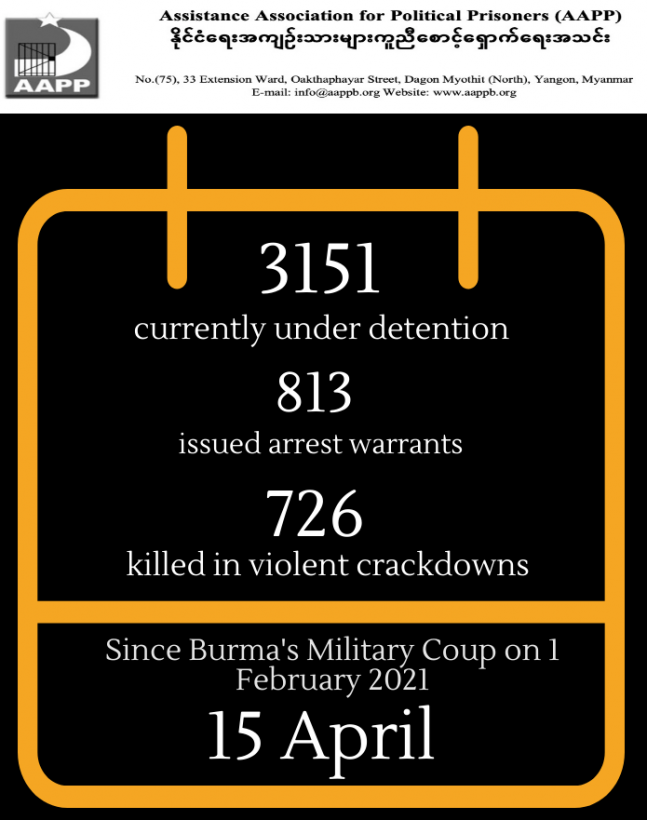 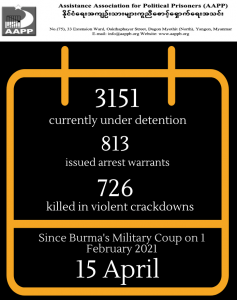 As of 15 April, (726) people are now confirmed killed by this junta coup. The Assistance Association for Political Prisoners (AAPP) compiled and documented (11) fallen heroes today. (1) from Mandalay died on 15 April. (10) were killed on previous days and documented today. This is the number verified by AAPP, the actual number of fatalities is likely much higher. We will continue adding as and when.

As of April 15, a total of (3151) people are currently under detention; of them (75) are sentenced. 813 have been issued arrest warrants; of them 20 were sentenced to death and 14 to three years imprisonment with hard labour, who are evading arrest. We are verifying the recently released detainees and continuing to document.

A new technique of the regime of the junta is now using unregistered vehicles with fake licence plates to smash into and arrest peaceful demonstrators. Today in Saigaing Region, Monywa, Wai Moe Naing was crashed into, beaten and detained, AAPP is concerned for his access to adequate medical treatment from the crash. Across Monywa youth demonstrators were detained today. In all dictatorships in Burma, this junta has tortured and mistreated. The junta has form for using torture in interrogation centers, we are also therefore worried the lives and dignity of detainees will be violated.

In Mandalay City, in a demonstration march led by healthcare workers and families, 6 were detained. At least 20 other local civilians were also detained. Junta forces also fired guns at Sule Mosque in Maha Aung Myay Township, Mandalay City and killed one person, 2 were critically injured, 1 of those critically injured was disabled. According to Myanmar Now 5 people sleeping inside the mosque were arrested, including children aged between 11 and 16.

These religious compounds and places of worship are supposed to be protected, but this junta targets these areas, looting and openly destroying property. The junta continued with its brutal arbitrary repression in complete disrespect of the Ramadan religious festival. In conflicts across the globe killing may stop, but the terrorists in Burma continue murdering and torturing no matter any holy days.

Yesterday afternoon in other cities and towns in Mandalay Region there were also shootings and killings. In Mandalay City, three civilians were injured. Yesterday in Myitnge, Mandalay, one person was shot dead, and another was shot and reportedly tortured to death, drowned in a puddle of mud by the junta. Yesterday in Myingyan whilst riding a motorbike, one person was shot and injured, he was tied up dragged along to death, his body has not been seen since. One other woman was shot in the arm and died.

The junta is also attacking ambulances. Last night in Mandalay, a team of medics transporting injured protestors was stopped, and a woman grabbed by the hair and dragged out, three others of the medical team were detained. The junta is publicly terrorizing and violating anyone and everyone’s human rights. This evening in Yangon. The junta crashed into a taxi, and detained and assaulted the taxi driver and 3 passengers and threatened the neighbourhood with similar action.

The previous night in Thamine ward, Insein Township, Yangon one civilian beating pots and pans was assaulted and arrested by junta troops, who then threatened the rest of the neighborhood with similar action. The junta wants to create a climate of fear. Everyday celebrities are issued arrest warrants on the TV propaganda mouthpiece. Today, famous Zin Wine and Singer Po Po (who had warrant issued for arrest) were detained

In Kachin State, Momauk Township the terrorist military and KIA are engaged in heavy fighting. The junta  is using artillery against civilians, who hide in bunkers, increasingly displaced and killed since the military use of airstrikes. The international community must implement a no-fly zone to stop these war crimes.