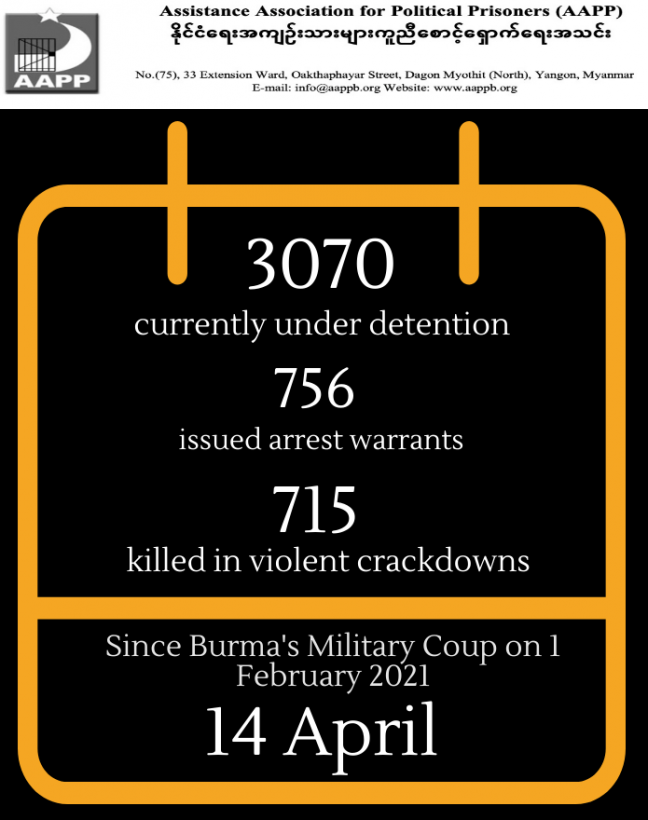 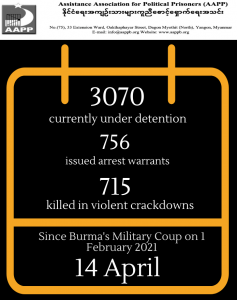 As of 14 April, (715) people are now confirmed killed by this junta coup. The Assistance Association for Political Prisoners (AAPP) compiled and documented (1) fallen heroes today. This (1) hero was killed on a previous day but documented today. This is the number verified by AAPP, the actual number of fatalities is likely much higher. We will continue adding as and when.

As of April 14, a total of (3070) people are currently under detention; of them (66) are sentenced. 756 have been issued arrest warrants; of them 17 were sentenced to death and currently evading arrest. We are verifying the recently released detainees and continuing to document.

Today was the second day of Thingyan in Burma but instead people protested and strike across the country. Including a “blood strike” across the county symbolizing streets where the junta killed innocents as still stained. The inhumanity of the dictatorship is revealed because the blood has not gone away. Protestors wroten slogans on roads, like “stop killing people” and “Save Myanmar” using this red paint.

Since this afternoon, Myitnge Town, in Mandalay Region was reportedly under siege by the junta, yesterday evening in Myitnge Town, at least five people were injured and many others arrested in shootings by the junta forces. In Bahan Township, Yangon, a man was shot dead in the chest while he was waiting for the bus near Min Street Bus Stop. Last night, in Kale Town in Sagaing Region, a man was shot in the stomach and injured when he was returning home from giving an oxygen tank to someone in an emergency.

Last night, Myanmar Radio and Television (MRT) broadcasted that 26 civilians were sentenced – to death, 7 years imprisonment with labour, or 3 years imprisonment with labour. Some of these civilians are currently evading arrest. The junta’s own actions of death sentences and long sentences are criminally arbitrary. The junta is abusing the right of everyone to peace and security, people are facing threats to their lives on a daily basis.

The junta robs the people like bandits. Yesterday, in Chin State, Hakha City, a military vehicle collided with a civilian car, destroying the man’s car. The man was detained for one night, 1.3 million Kyat in the vehicle was also stolen. A house in South Okkalapa Township, Yangon Region which stored rations and distributed donations was raided and 300 pounds of oil were stolen. The junta commits these crimes without regard for the law like terrorists.

At the Yangon Education Center for the Blind in Mayangon Township, Khawe Chan. At around 7.30pm 12 April, approximately 70 junta Battalion No.77 jumped over the compound gate and set up base in two of the buildings. Inside were around 50 blind students (age between 5 and 30) and 30 family and blind staff in the wider compound, reportedly all still there. Staff movements are restricted. The junta troops initially said they would keep the base for 5-7 days, but on 13 April, they instead said it would be 1-2 weeks.

Occupying a school of disabled students is not only morally abhorrent, but also violates universal international law. The UNSC must uphold its commitment to give these vulnerable students their protection and dignity which has been directly threatened by this junta terrorism and coup attempt.