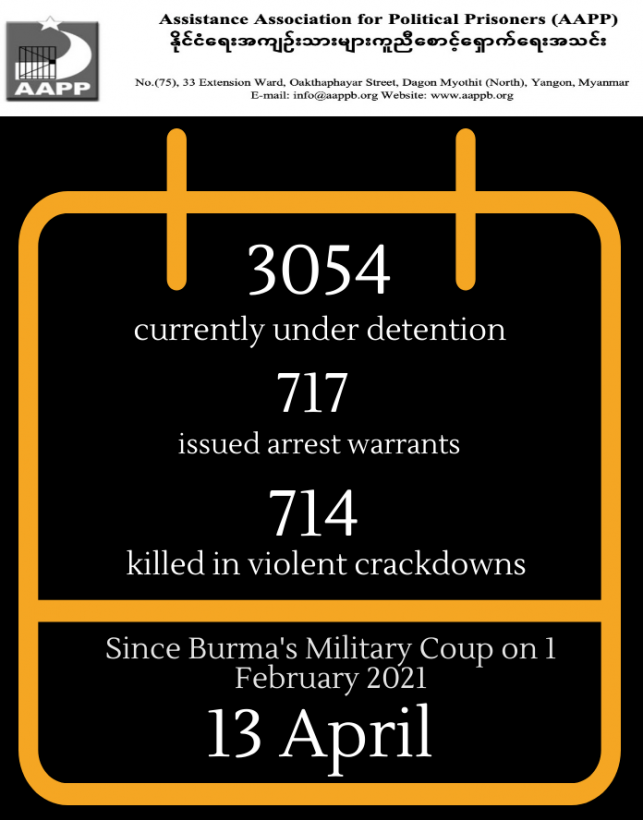 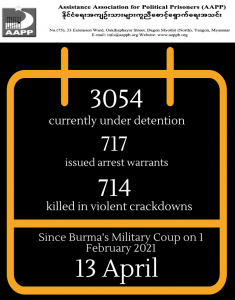 As of 13 April, (714) people are now confirmed killed by this junta coup. The Assistance Association for Political Prisoners (AAPP) compiled and documented (4) fallen heroes today. (2) from Tamu Town in Sagaing Region  died on 13 April. (2) were killed on previous days and documented today. This is the number verified by AAPP, the actual number of fatalities is likely much higher. We will continue adding as and when.

As of April 13, a total of (3054) people are currently under detention; of them (66) are sentenced. As 79 people including UEC members were released, we removed them from today’s detainee list. 717 have been issued arrest warrants; of them 17 were sentenced to death and currently evading arrest. We are verifying the recently released detainees and continuing to document.

Today on the eve of the Thingyan, people from all over Burma protested against the military dictatorship by chanting “Ye Ye Ni Sway Atar Oh Revolution” (The Red Welcome Flowerpot to Spirit Revolution), without having fun in water.

Today, junta troops stormed Tamu, Sagaing Region. Since this morning, some wards in Tamu have been being raided, barricades and people’s homes nearby were shot at unprovoked. Today, a man and a woman were shot dead while delivering milk in Tamu. Five youths were reportedly beaten, hooded, and taken away.

Persecution is practiced as routine for decades by dictatorships, now targeting civilians. Yesterday, in Insein Township, Yangon Region, a night watchman went missing on his way home after his duty. His family inquired of his whereabouts and found his dead body with wounds consistent with torture in another township, Hlaing Tharyar Hospital.

The military attempts to create religious conflict as its policy. At a mosque in Tamwe Township, Yangon Region, a man, who called Muslims to prayer was found dead by hanging, his entire body and hands on back tied. Police and mosque officials have issued a statement condemning the alleged suicide, even though experts say suicide was not possible. Everyone has the right to life, liberty and security of person. It is a fundamental human right. In Burma it is a tragedy everyone is threatened and are concerned for their safety every day.

This morning, arrests were made in Myingyan Township, Mandalay Region. Nine people were arrested in a raid on Lel Thit village in the eastern part of Myingyan. Last night, Mayangone Township, Yangon, a raid on Mudita’s Housing led to the arrest of at least 10 people. Yesterday in Taungdwingyi Township, Magway Region, thousands of locals were forced to flee their homes due to a military terrorist group opening fire on three villages of Pat Lal Gyi Village Tract, destroying homes and property. In order to retain power, the terrorist regime commits crimes against humanity on a daily basis.

Yesterday’s news that the kyat has dropped 14% against the US dollar provides further warnings of Burma’s likely descent into a failed state. Burma already hosts fragile industries, which now face complete collapse. The economic effects will be felt internationally, particularly damaging its top investor Singapore and thereafter the entire ASEAN. Soaring food and gas prices come alongside yesterday’s scenes of long queues at ATMs in Yangon, as people panic to withdraw cash from crumbling bank systems. With junta terror prevailing in Tamu in particular today, economic chaos will engulf the entire country.