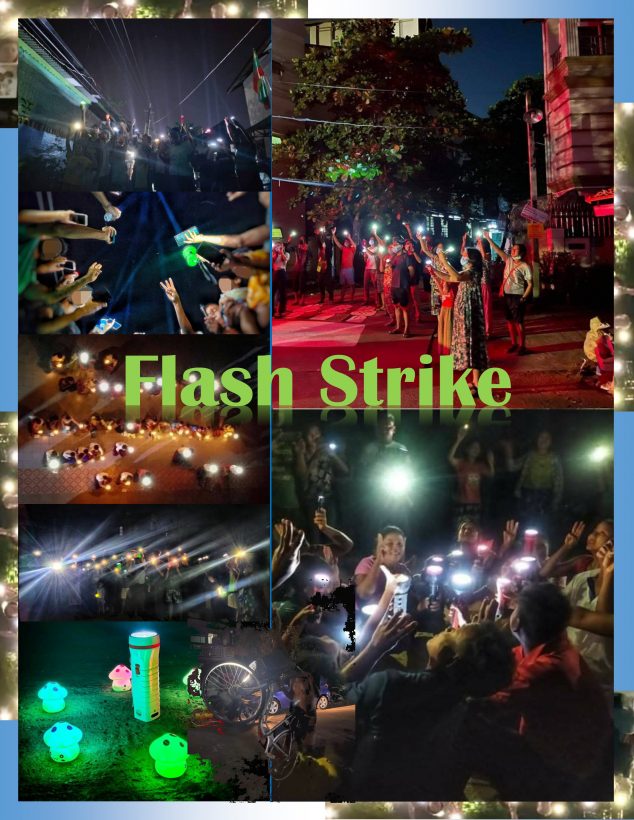 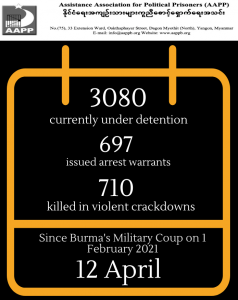 As of 12 April, (710) people are now confirmed killed by this junta coup. The Assistance Association for Political Prisoners (AAPP) compiled and documented (4) fallen heroes today. These (4) heroes were killed on previous days and documented today. This is the number verified by AAPP, the actual number of fatalities is likely much higher. We will continue adding as and when.

As of April 12, a total of (3080) people are currently under detention; of them (64) are sentenced. 697 have been issued arrest warrants; of them 17 were sentenced to death and currently evading arrest. We are verifying the recently released detainees and continuing to document.

Last night, across the country civilians held a “flashlight strike”, lighting the sky in a powerful symbol of unity against unlawful military rule. Aerial images captured the extent of the people’s resistance. Junta forces responded to even these peaceful acts of solidarity with brutal violence. In one case in Aungmyethazan, Mandalay, CCTV footage shows the junta abducting civilians who simply turned on flashlights in their own homes. Nationally civilians also took part in a watermelon strike encouraging a boycott of Chinese products and fruits. This was in solidarity with farmers and in opposition to a China refusing to directly criticize the terrorists in Burma.

Today people across Burma again continued in their protests against dictatorship, a coalition strike in Mandalay City was suppressed with gunfire. In Kyaukme, Shan State, the terrorists used tear gas and sound grenades in the afternoon. However, no one was injured or arrested. Junta forces removed barricades made by people in Narnattaw Ward, Loikaw Township, Kayah State and arrested seven individuals. Four of the seven were released soon afterwards.

Although crackdowns appeas apear to be on the decline there are in fact ongoing shooting, killing, torture and arrests. Beginning early this morning, so-called police and military terrorists used excessive force to attack Tamu Township, Sagaing Region. Junta troops advanced through Tamu and destroyed people-made barricades, all civilians found were tied up. The terrorists opened fire and raided houses, suspects were arrested and taken away.

The junta group raided and looted Grace Hospital in Tamu and beat the nurses. They also stormed the Methodist church compound and stole mobile phones, gold and jewelry and money which belonged to the abbot and civilians in the compound. The ward administrator house was also raided and property destroyed. During the raid, a seven-year-old boy was shot and wounded. Some people were forced to flee their homes. The terrorist group stormed the entire city with their weapons, and launched a fierce offensive in order to finally destroy a city united in defense regardless of the bombardment from heavy artillery.

If they do not find people to arrest, the junta takes relatives and friends as hostage, it is a routine tactic of this terrorist regime. It is an attempt to threaten through kidnaping anyone close to them. In Tedim Township, Chin State; parents were taken hostage because the son of the Cooperative Department involved in the Civil Disobedience Movement (CDM) was not found and arrested. According to AAPP documentation 32 hostages have been taken so far.

Deaths by torture during detention and inhumane beatings are being perpetrated to create public fear. In Monywa, Sagaing Region, a villager was arrested and beaten last night for banging pots and pans. Today, a delivery man in Yangon was beaten for wearing a black mask and suffered bruises all over his face. Only by overthrowing the dictatorship can the persecution end, in addition to looting and robbing carried out openly by the terrorists. On April 10, in North Okkalapa Township, Yangon, the military terrorists broke into a man’s house on No. 13 Nwe Ni Road, took 180,000,00 Kyats and other valuables, beat him without reason and took him away. On April 10, in North Dagon Township, Yangon, a car driven by a dentist was allegedly stopped and searched and the dentist fined 120,000 Kyats and his wallet stolen for just  giving free medical treatment.

In the ethnic states, in Moe Mauk Township, Kachin State, fighting between the Kachin Independence Army (KIA) and the terrorist group intensified. A woman and a man were killed when artillery shells fired by the junta exploded in villages last night, another villager was injured in the leg. In Alaw Bum, the headquarter of Kachin Independence Organization (KIO) area has been blasted with a series of fighter jets since this morning.