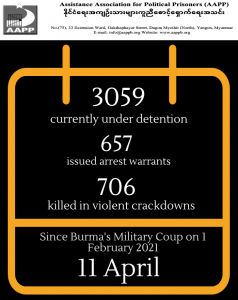 As of 11 April, (706) people are now confirmed killed by this junta coup. The Assistance Association for Political Prisoners (AAPP) compiled and documented (5) fallen heroes today. (1)  died on 11 April. (4) were killed yesterday and documented today. This is the number verified by AAPP, the actual number of fatalities is likely much higher. We will continue adding as and when.

As of April 11, a total of (3059) people are currently under detention; of them (64) are sentenced. 657 have been issued arrest warrants; of them 17 were sentenced to death and currently evading arrest. We are verifying the recently released detainees and continuing to document.

People are protesting against the junta on a daily basis, today participating in the “Green Day Strike”. On 11 April even though unprovoked shootings and arrests continued, the supposed calm is a serious cause for concern. Today, in Tamu, Sagaing Region, two people on a motorcycle were shot in front of the district police station, the man was shot dead and woman injured and close to death but no one dared rescue them. On 10 April in Wa Roung Village, Ahyartaw Township, Sagaing Region, a young man was shot dead and another injured in a crackdown on protesters. Last night, in Pathein Township, Ayeyarwady Region, two youths on a motorcycle were shot at in an effort to detain, but no one was injured or arrested.

Since the military coup in Burma, the terrorist group has mainly targeted political parties, organizations and parliamentarians. One NLD MP from Pantanaw Township, Ayeyarwady Region was arrested yesterday, the military terrorist group uses torture as its weapon in detention, it is a serious cause for concern that detainees will survive with human dignity.

In the ethnic states, conflict by the junta in particular against the Kachin Independence Army (KIA) and Karen National Liberation Army (KNLA) continued. From last night to this afternoon, fighting between the KIA and the junta intensified in Momauk Township, many locals have been forced to flee.

Today was the 70th day since the coup, but the attempt to control the state through oppression has failed. The coup in 1988 took a matter of days, the 2021 attempted coup has lasted over two months. People are demanding the military step back and return power to the elected government, the people realize the essence of democracy, they lost their freedom in an attempt to return back to dictatorship. The population are enduring atrocities and fighting for the overthrow of the dictatorship and for true democracy. The military terrorist group is carrying out daily shootings and killings. AAPP urges the international community, including ASEAN, to take immediate action to prevent further injuries and deaths in Burma.