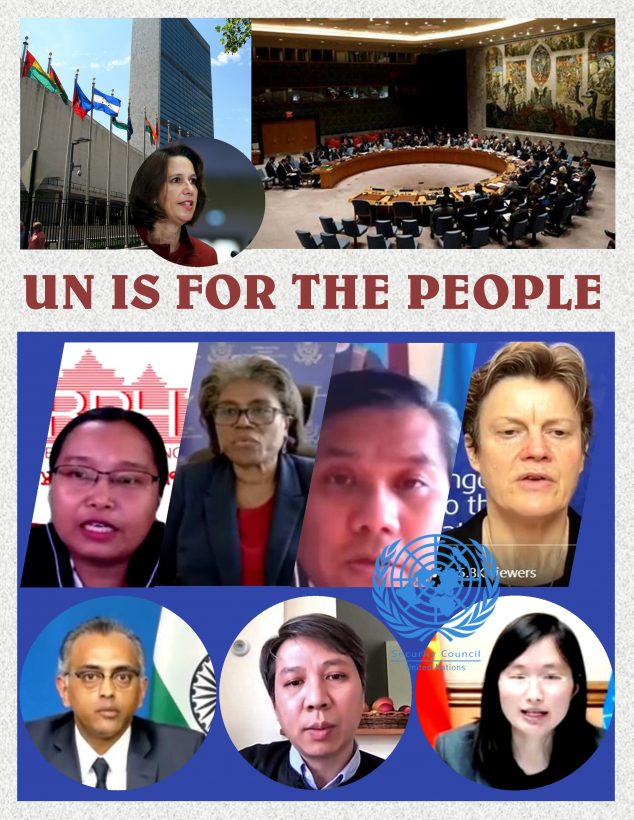 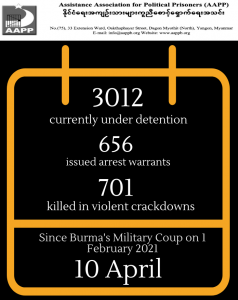 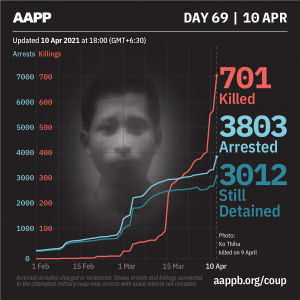 As of 10 April, (701) people are now confirmed killed by this junta coup. The Assistance Association for Political Prisoners (AAPP) compiled and documented (83) fallen heroes today. (1) from Tamu Town, Sagaing Region died on 10 April. (82) from Bago were killed yesterday and documented today. This is the number verified by AAPP, the actual number of fatalities is likely much higher. We will continue adding as and when.

As of April 10, a total of (3012) people are currently under detention; of them (63) are sentenced. 656 have been issued arrest warrants; of them 17 were sentenced to death and currently evading arrest. We are verifying the recently released detainees and continuing to document.

Yesterday Bago City was brutally raided by terrorist troops from dawn to dusk, trying to create a combat zone, but it was a killing field. As many as 82 people have been confirmed dead in the shootings, but more are expected. Some were injured and requesting medical treatment, but the military terrorists did not allow any help. Some were therefore killed from excessive bleeding. Dead and injured bodies piled up together. People in urban areas are now fleeing to nearby villages. Today so-called police and military terrorists searched and shot into homes in places.

The violent massacre of at least 82 people in a single day in Bago was a crime against humanity. The Committee Representing Pyidaungsu Hluttaw’s (CRPH) presented the current situation in Burma to the UN Security Council’s Arria Formula Meeting last night. The military junta perpetrated this violence, shooting was designed to keep the public from protesting and induce a climate of fear leading up to the UN meeting.

Despite the mass killings and torture in public and in private, despite threats and intimidation, people across Burma continue through such hardships. The people protest the military dictatorship in various ways on a daily basis. Demonstrations continued into today, including a “Red Movement Campaign” entitled “Absolutely No Rule”.

Plainclothes junta forces suppressed the Mya Taung protest march today in Mandalay, arresting 15 people. A Karen youth was reportedly shot dead in Ka Than village, Dawei City in Tanintharyi Region this morning, but is not yet confirmed. Terrorist troops were deployed in Sagaing Region from 12 noon today. They opened fire on some wards in Tamu Township to repress protesters and destroy roadblocks.  It was initially reported that a motorbike driver was killed in an unprovoked shooting.

19 people in North Okkalapa Township were sentenced to death and six others sentenced to prison by the military terrorist-run Burmese radio and television broadcasting (MRTV) last night. In one of the Martial law areas of North Okkalapa Township, a military tribunal began to hear cases and sentenced to death 19 civilians on April 8 in connection with the deaths of two members of the junta on March 27. Two civilians have been arrested so far and 17 are on the run. Six people were also sentenced to 7 years in prison on charges of public property vandalism. The terrorist regime refuses to abide by the law, they use it illegitimately and commit illegal acts, they impose the death penalty and long prison sentences  to silence the people.

In the Arria-formula UN Security Council meeting yesterday, the international community was warned Burma was on the brink of “state collapse” by security analyst Richard Horsey. The CRPH foreign minister, Daw Zin Mar Aung, continued to urge all states to give rightful legitimacy to the CRPH. If a solution is not found, governance, the economy, and health service could resemble a failed state. Armed conflict is reigniting, mass displacement will follow. Continued international condemnation of junta violence is essential, as is the  imposition of arms embargoes. These measures would vitally signal a lack of legitimacy and condemnation of this terrorist junta, and into pressuring them to reverse the attempted coup.