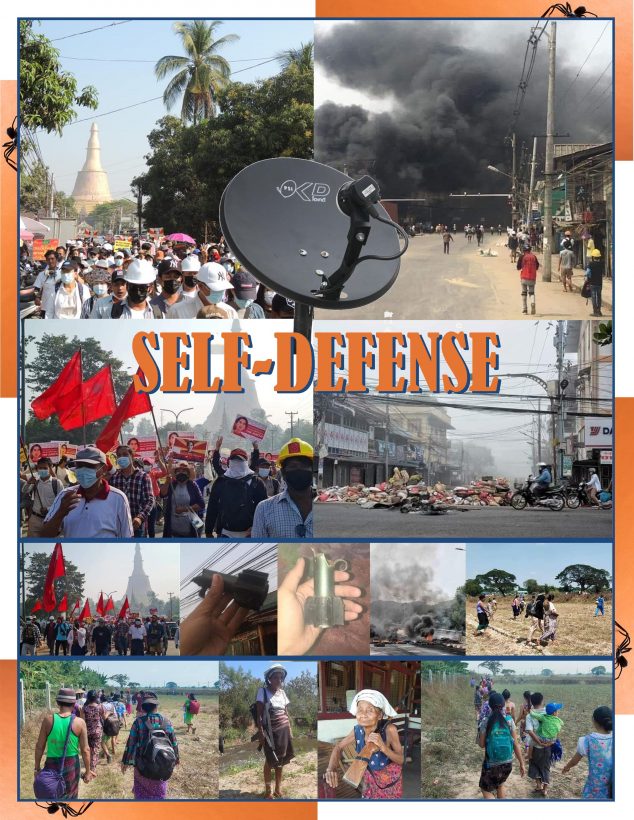 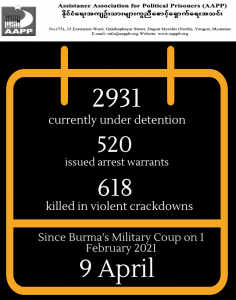 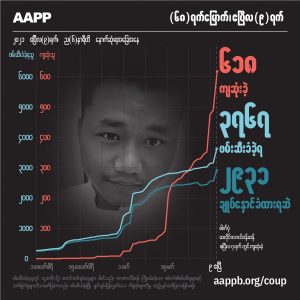 As of 9 April, (618) people are now confirmed killed by this junta coup. The Assistance Association for Political Prisoners (AAPP) compiled and documented (4) fallen heroes today. (1) died on 9 April. (3) were killed on previous days and documented today. Today there were many reported casualties in Bago, AAPP is still awaiting confirmation to identify all these. This is the number verified by AAPP, the actual number of fatalities is likely much higher. We will continue adding as and when.

As of April 9, a total of (2931) people are currently under detention; of them (54) are sentenced. 520 have been issued arrest warrants.  We are verifying the recently released detainees and continuing to document.

Earlier this morning before dawn, the military terrorist troop destroyed main roadblocks on both sides of Maggatic Road built by anti-military activists to prevent a violent crackdown in Bago. The terrorist junta used assault rifles, heavy weaponry like RPG, and hand grenades from both sides of the road to suppress the protesters’ bases and residences. Four identified civilians were killed and several injured. At least 20 people were killed this evening but are being confirmed.

Protests in Katha, Sagaing Region were suppressed, but no one was injured or arrested. In Tamwe Township, Yangon Region, at least eight youths have been beaten and arrested by 12 military terrorists and so-called police vehicles during a protest march in Kyauk Myaung. In Sanchaung Township, Yangon Region, two people were arrested and two were hit by the rubber bullets.

Night demonstrations have also been cracked down on, last night in Yangon Region, so-called police and military assaulted a march in Lanmadaw Township. They arrested nine civilians, beating and tying them with ropes. The protesters burned the flag of China and were searched and arrested by military terrorists. Last night, they went looking into some wards in Insein Township, shooting, and arresting four civilians.

Torture during detention and the shooting of people found in searches is a grave human rights violation. In Burma these are openly committed by the so-called regime in order to maintain power. In Kyaukpadaung, Mandalay Region, a man active in anti-military protests was searched for, when he tried to escape he was shot in the leg and shot dead in the back.

After the coup, the military terrorists enacted a law which can impose a fine of up to 10,000 Kyats or up to seven days in prison if no guest list is filed, threats of these are now increasingly used. Junta-appointed ward administrators threatened wards with loudspeakers of up to three years imprisonment or maximum fines if people do not comply with the order for overnight registration. This is not only a violation of the law by the military junta, but also a way for them to scatter and arrest suspects at any time.

Despite the severe repression of the media sector in Burma and the restriction of the flow of information in various ways, the junta continues to escalate oppression of journalists. Today, Hpakant-based journalist Naung Yoe was arrested while covering a protest rally in the city. A women’s rights activist and  co-founder of Mizzima media, and a colleague were arrested. 29 media were detained by yesterday, only two on bail, and this is rising. Journalists in Burma are coming under escalating oppression.

In the ethnic states the junta continues its offensives against Karen National Union (KNU) controlled areas. A man was killed when 12 artillery shells were fired into three villages in Hpapun District. Ye Township, Mon State, the villagers from the entire village fled as the army occupied and set up base in Man Aung village yesterday evening.

The military seized power in 1962 and 1988, and the people suffered decades of brutal human rights abuses under dictatorship. Once again, the 2021 coup undermines the very essence of democracy, people losing their freedom. A peaceful federal union will be established once the dictatorship is overthrown, hence we must all fight together to overcome it.

Burma’s economy is approaching that of a failed state, continued economic devastation brought about by the junta coup, terror and governance policies will impede investment and growth in ASEAN as well. The junta does not want stability, instead the junta kills civilians and creates terror. Today firing mortars at people to destroy barricades in Bago causing civilian casualties. As ASEAN members announce a proposal to hold an Emergency Summit, AAPP urges them to adhere to their Charter, taking the necessary measures to create a region which is “stable, prosperous, highly competitive and economically integrated”, and which necessitates an end to the military coup.