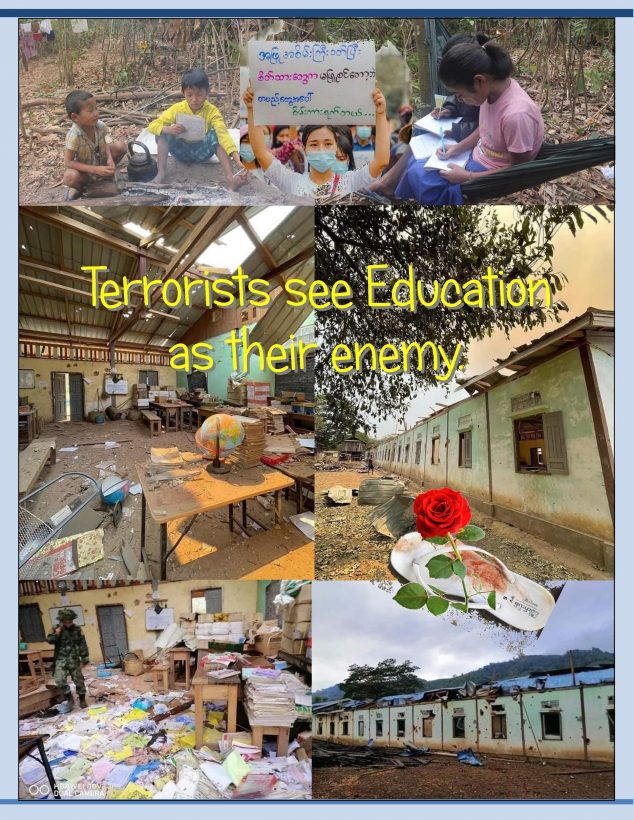 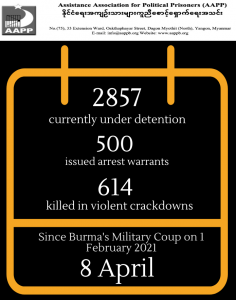 As of 8 April, (614) people are now confirmed killed by this junta coup. The Assistance Association for Political Prisoners (AAPP) compiled and documented (16) fallen heroes today. These (16) heroes were killed on previous days and documented today. This is the number verified by AAPP, the actual number of fatalities is likely much higher. We will continue adding as and when.

As of April 8, a total of (2857) people are currently under detention; of them (52) are sentenced. 500 have been issued arrest warrants.  We are verifying the recently released detainees and continuing to document.

Yesterday, Kale and Taze Townships in Sagaing Region, and Bago Region were attacked by junta forces, 25 civilians were killed. Yet people across Burma staged protests without fear, confronting the brutality of the military dictatorship.​ A “Marching Shoes Strike” was held in honor of the fallen heroes in this regard.

Arrests are made day after day by ward administrators appointed by the terrorist group, using informants where the military does not control the Ward administrators. Earlier this morning, seven men were arrested during a protest rally in Hpakant. So-called police and military raided wards in South Dagon Township, Rangoon Region yesterday, and arrested nearly 100 people, including girls.

Last night and today, a total of 11 civil society leaders and university students were arrested in Matupi, Chin State. The terrorist group targeted religious buildings and health clinics. Yesterday in Mandalay Region, they raided the Asia Light Foundation Charitable Monastery and a clinic in Ahnee Sakhan, Pyin Oo Lwin. The military removed security cameras at the monastery. The military terrorists could not find the abbot of the monastery. The junta arrested a driver of the Santisukha Charitable Association and a medical doctor.

The terrorist group has been oppressing domestic access to news and the flow of information, and continues to restrict access to the internet. Today, some in townships, Ayeyarwady Region and Mon State; PSI satellite receivers set up at homes in Paung were seized, and PSI satellite receivers and CANAL+ Myanmar FG receivers were stolen from electronics stores. One of the electronics stores was also looted for money.

The looting was aimed at cutting the Mizzima and Democratic Voice of Burma (DVB) television broadcasts of real-time human rights abuses by the militant regime on PSI and CANAL+. The terrorist group oppresses and commits crime against humanity every day. Negotiations between the people of Burma and the military terrorist group are impossible because of their actions.

The junta also crossed yet another tragic milestone today, as 614 people are now confirmed to have been killed. ASEAN was established with a purpose to “promote and protect human rights and fundamental freedoms”. States adhere to a fundamental principle of upholding the “United Nations Charter and international law, including international humanitarian law”. ASEAN will be abandoning its purpose and principles if it continues to pursue incongruous policies of non-intervention.