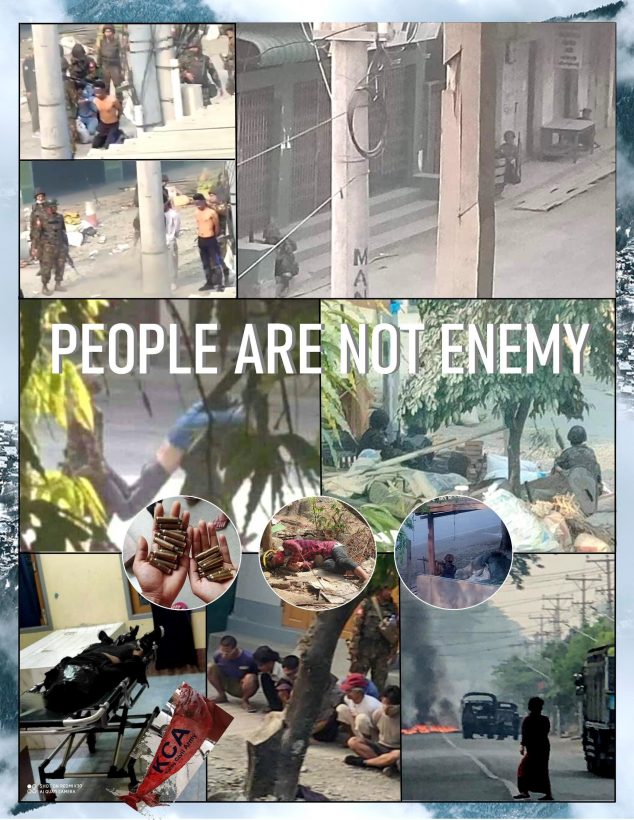 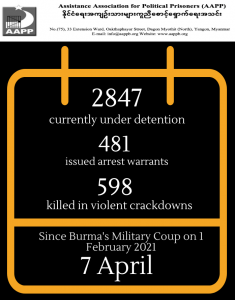 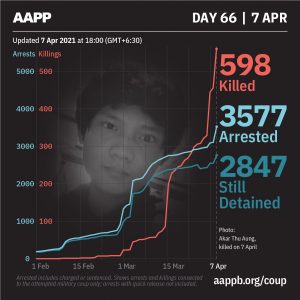 As of 7 April, (598) people are now confirmed killed by this junta coup. The Assistance Association for Political Prisoners (AAPP) compiled and documented (17) fallen heroes today. (12) died on 7 April. (5) were killed on previous days and documented today. This is the number verified by AAPP, the actual number of fatalities is likely much higher. We will continue adding as and when.

As of April 7, a total of (2847) people are currently under detention; of them (38) are sentenced. 481 have been issued arrest warrants.  We are verifying the recently released detainees and continuing to document.

Peaceful protests continued across Burma today, some witnessed crackdowns, the illegitimate military is focusing its terror on rural areas. In the early morning, the junta forces excessively used live rounds, grenades, and machine guns trying to create a conflict zone in Tahan Ward, Kalay Township, Sagaing Region. At least 8 civilians were killed and 20 others injured, including one civilian who lost his hand. Over 10 civilians were violently arrested. During the crackdown, junta forces opened fire into houses and searched and raided community clinics. Moreover, in Taze Township, Sagaing Region, a civilian was killed and more than 20 people injured, three of them are in critical condition. A villager from Paline village was reportedly dead this evening in Ngar Hsuu Kone village strike in ShweBo Township, Sagaing Region. In Kyaukyisu Ward, Bago City, 2 men were killed and at least 3 civilians injured in an unprovoked shooting by junta troops.

Some people were also killed and others injured when the military and so-called police opened fire last night. In the Nyaung Shwe Township, Shan State, one youth was shot dead in the head. In Myingyan Township, Mandalay Region, it is reported that some civilians were injured in unprovoked shootings by the junta.

During detention, torture to death continuely occurs, on the night of April 4 in Taunggyi Township, Shan State, whilst the Nyaung Phyu Ward Administration Office was on fire a youth who came out to stop the fire was arrested by the military and so-called police. Two days later, his dead body was returned to his family with many wounds including skull fracture, one ear nearly amputated, genitalia mutilated, stab wounds in the back. The young man died from severe torture, but the junta claims he died when hit by a fire truck. On April 5, the junta informed a family to take the dead body of a young man arrested in Kawthaung Township, Tanintharyi Region.

The terrorist junta not only vandalizes and destroys property in towns, villages and streets but also on houses and restaurants. There were raids in Khin Oo township, Sagaing Region, and junta forces stormed a house and searched the cupboards and boxes of a fallen hero in Kan Thit village yesterday. Moreover, they raided a restaurant at Inn Pat greengrocery and stole over 11 hundred thousands kyats in cash and arrested a chef, and an orphan.

Conflict perpetrated by the terrorist junta continued against the ethnic areas. This morning, junta Infantry Battalion No.299 opened fire from the edge of the stream in Mhan Aung village in Win Ray township, Duu Palayar District, Karen State with heavy artillery. A villager was killed, and another villager wounded with local residents displaced in the clashes between the military and Karen National Liberation Army (KNLA) near Mhan Aung village last night. As known reportedly, the junta forces opened fire onto villagers and made the villagers be protection shields during their military operations .

Burma has fallen into chronic instability, there is no peace. The livelihoods of anyone and everyone are under threat. Left alone, the junta’s terrorism will escalate and threaten peace in the whole region. The ASEAN Charter pledges to a “shared commitment and collective responsibility in enhancing regional peace, security and prosperity”. The effects of airstrikes and military offensives against civilians in Karen State have already gone into other ASEAN states. A lack of coherent action challenges the relevance of its Charter. Current non-interference will directly challenge the peace, sovereignty and security of ASEAN members. The most severe violence today was in Kalay, Sagaing, a nearby town to another neighbor, India. This junta terrorism cannot be seen as a domestic issue, it poses a risk to the peace and security of of all ASEAN’s people, and to the stability of the entire region.