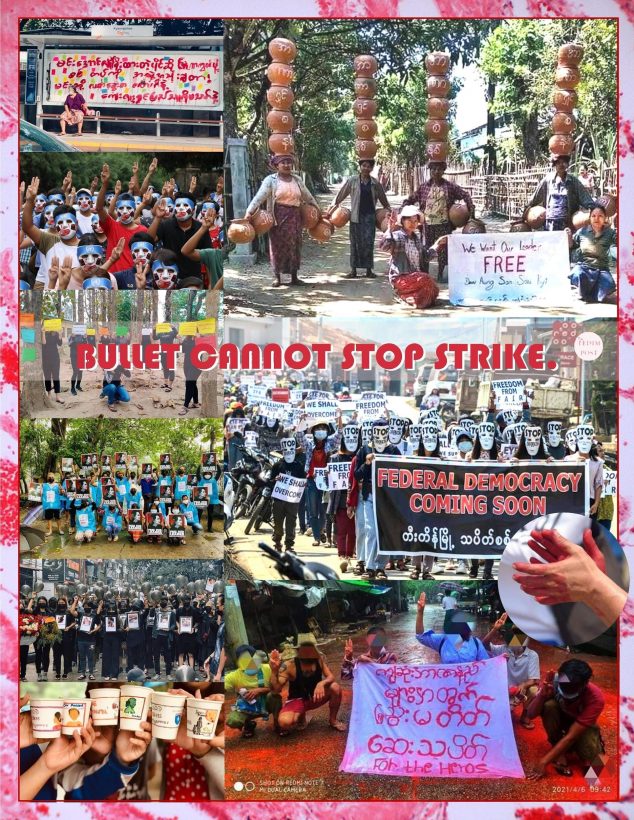 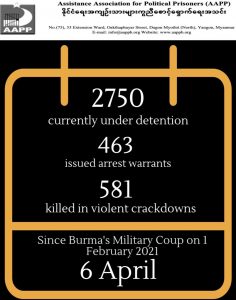 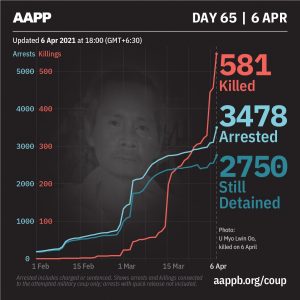 As of 6 April, (581) people are now confirmed killed by this junta coup. The Assistance Association for Political Prisoners (AAPP) compiled and documented (11) fallen heroes today. (1) died on 6 April. (10) were killed on previous days and documented today. This is the number verified by AAPP, the actual number of fatalities is likely much higher. We will continue adding as and when.

As of April 6, a total of (2750) people are currently under detention; of them (38) are sentenced. 463 have been issued arrest warrants.  We are verifying the recently released detainees and continuing to document.

Burma is being terrorized by a junta with no legitimacy. At its founding ASEAN enshrined a purpose “to maintain the centrality and proactive role of ASEAN as the primary driving force in its relations and cooperation with its external partners”. Non-interference and a lack of international cooperation amidst these ongoing crimes against humanity will question the very purpose of ASEAN. The non-interference policy does not mean allowing the junta to torture detained persons, or mutilate civilians with tattoos of their democratically elected leaders. The ASEAN Charter compels it to respond, non-interference against these crimes risks jeopardizing ASEAN’s global reputation and credibility and will crucially impact their global trading capacities and international diplomacy.

In Pinlebu Township, Sagaing Region, the junta forces opened fire until the night, resulting in two civilians killed. Last night in Mogaung also, Kachin state, a man was shot and injured and a woman inside the house was seriously injured in the arm due to unprovoked shooting by junta troops.

The military junta is kidnapping family members as hostages if they don’t find the people who they want. Today in Natlu Hti Pon Ward, Monywa Township, Sagaing Region, the younger brother was taken and arrested as a hostage instead of his elder brother. Yesterday, the military forces arrested six family members including 2 years and 13 years old children of the in-charge of the information of the Tharrawaddy NLD who was warranted for pro-democracy movements in the Tharrawaddy Bago region.

People are constantly being killed by the military in interrogations. One man who was arrested while he was protesting was released with injuries consistent with torture last night and died today in Loikaw, Kayah State.