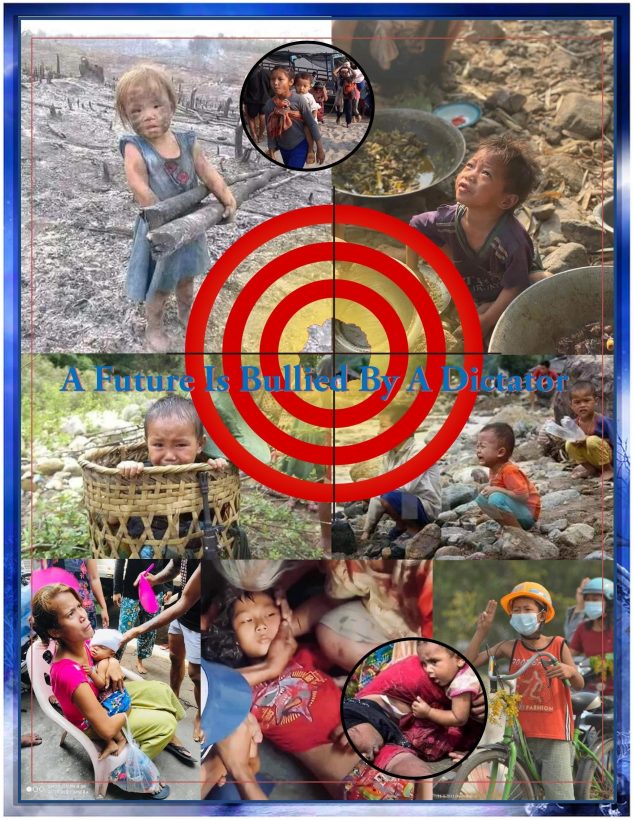 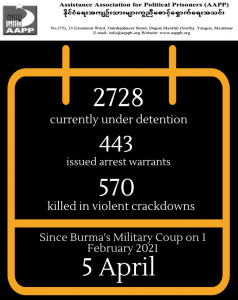 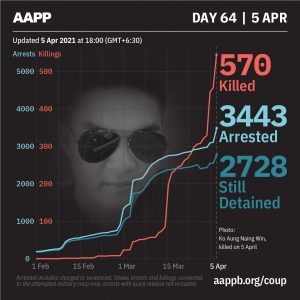 As of 5 April, (570) people are now confirmed killed by this junta coup. The Assistance Association for Political Prisoners (AAPP) compiled and documented (6) fallen heroes today. (1) died on 5 April. (5) were killed on previous days and documented today. This is the number verified by AAPP, the actual number of fatalities is likely much higher. We will continue adding as and when.

As of April 5, a total of (2728) people are currently under detention; of them (38) are sentenced. 443 have been issued arrest warrants.  We are verifying the recently released detainees and continuing to update the lists.

Today, people across Burma defy the dictatorship’s brutal represion, there were violent crackdowns on protests in PinLeBu town in Katha District, Sagaing Region. In the junta assaults, two students were arrested, one man killed, and two wounded civilians also arrested. Gunfire was used against crowds of people demanding the release of the two detained students.

Last night in Mandalay City, a woman was shot dead on the spot and a man injured in his stomach while riding a motorbike, in arbitrary fire by junta forces. Moreover last night in Kyaukme town, Shan State, two passersby were threatened with gunfire and injured by bullets. In Tamu town, Sagaing Region, the terrorist forces opened fire unprovoked towards the people. When trying to counter, people were injured and some houses and walls hit by gunfire by the junta group.

Today, protestors were searched for in homes and arrested on the roads, as happens consistently these days. This morning, youths in Tamwe and Kyauk Myaung were searched for in their homes and some reportedly arrested. Moreover, passing motorbikes and cars on the roads were being investigated and if the passengers’ mobile phones were caught with anti-military dictatorship stickers and photos, they were detained.

The terrorist soldiers and so-called police commit torture in public daily to install a climate of fear into the community and people. Last night, soldiers and so-called police abducted, and forced one man to take off his clothes, finding “Spring Revolution” and “Daw Aung Sann Suu Kyi” portrait and the word “22222” tattooed on his arm. The soldiers then lit a piece of tire to burn and mutilate his arm tattoo. In addition to burning his tattoo, he was kicked and beaten with gunstock. Such inhumanity is casually and worryingly committed by this junta against the people.

Since March, the junta has excessively oppressed free media and the journalists leading to the termination of many news outlets. The junta is also threatening ethnic news departments. On April 3, the Hakha Post news department based in Hakha town in Chin State was raided and two desktops and office documents stolen. News staff were evading arrest at the time.

It is apparent that daily arson is perpetrated by the junta because it happens during the night and time of martial law. This morning, Yoma water purifying factory in Hlaing township, Yangon Region, was burnt on fire and also last night, the administer office of 32th Quarter, North Dagon township, Yangon was arsoned in Taunggyi, Shan State, the administer office of Nyaung Phyu Kan was torched.

Despite it being the 64th day since the attempted coup, the terrorist group cannot control administration or political power. Since the coup, the economy, society, healthcare and every other aspect of governance has deteriorated. Thus, the junta suppresses Burma’s people through brutality every day. To bring this criminality to an end requires not only targeted sanctions but also effective and powerful action against the junta by the international community in a united call for fundamental human rights and democracy.