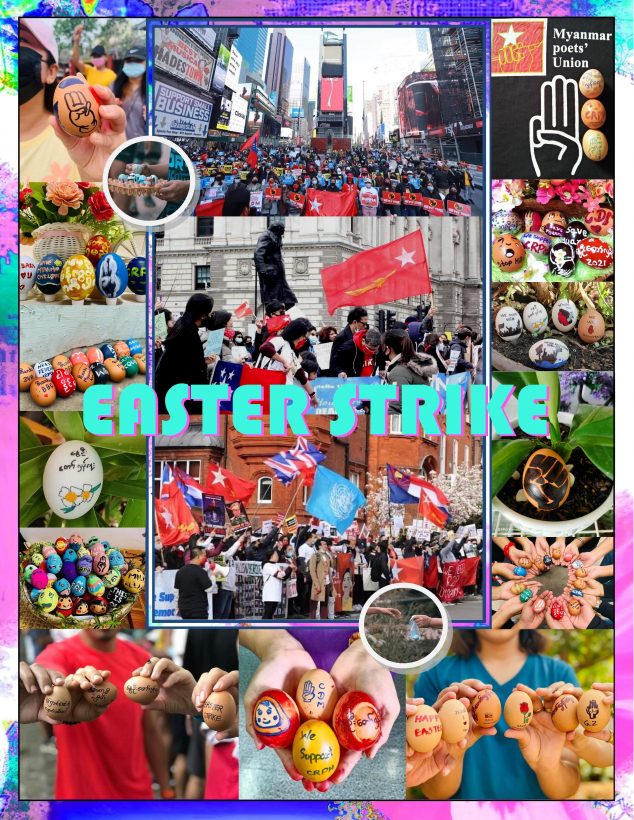 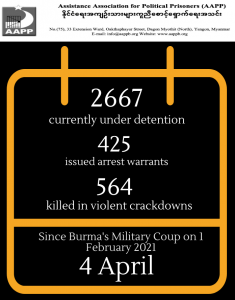 As of 4 April, (564) people are now confirmed killed by this junta coup. The Assistance Association for Political Prisoners (AAPP) compiled and documented (7) fallen heroes today. (2) died on 4 April. (5) were killed on previous days and documented today. This is the number verified by AAPP, the actual number of fatalities is likely much higher as the death toll continues to rise. We will continue adding as and when.

As of April 4, a total of (2667) people are currently under detention; of them (38) are sentenced. 425 have been issued arrest warrants.  We are verifying the recently released detainees and continuing to update the lists.

Today anti-coup protests by people in Burma took the form of an “Easter Egg Strike” in support of democracy. In Pyinmana town, a man was reportedly killed. In Bhamaw town, Kachin State, battalion 77 raided the residential ward and opened fire, hitting a community guard in his chest and leg, who later died of wounds. His body was taken away by the military and so-called police. More than six people were injured and ten community guards were beaten and arrested. In Kayah State, the MineLone strike was violently cracked-down onto the streets, thus more than five people were arrested and many injured by rubber bullets.

The terrorist junta vandalizes every day. This morning, the office of the junta-appointed administer of North Kyun Taw Quarter in Sanchaung township, Yangon Region, was arsoned during a night of martial law. Whenever these incidents happen, the junta group declares falsely that it was the people who committed these crimes, to spread propaganda. As for arbitrary violent raids, a house with a grocery store in Tamu town, Sagaing Region, was raided and opened fire on, and threw a hand grenade yesterday afternoon.

The terrorist junta threatens the people with torture every day, their brutality is evidenced by:

The terrorist junta has applied torture as their normal routine for about seven decades, dictatorships do this to install fear and and stop dissent to their rule. Also in ethnic areas, the terrorist regime threatens demonstrations. Yesterday, it was reported that the commanding officer of the South Eastern Command of the terrorist group threatened to shoot if the people protested on the streets in Phaya Thone Sone town in Karen State.

In Monywa, Sagaing Region, it was reported that people in some neighborhoods were evacuating their homes since the last weekend of March because of so-called police and military entering neighborhoods, shooting, and robbing.

On 4 April, the Peace Process Steering Team (PPST) of the signatories of Nationwide Ceasefire Agreement (NCA) announced a statement that urges immediate cessation of violent crackdowns and killings of unarmed people, to immediate release of all detainees and three other points. AAPP welcomes this statement and will cooperate as much as we can for peace and national reconciliation.