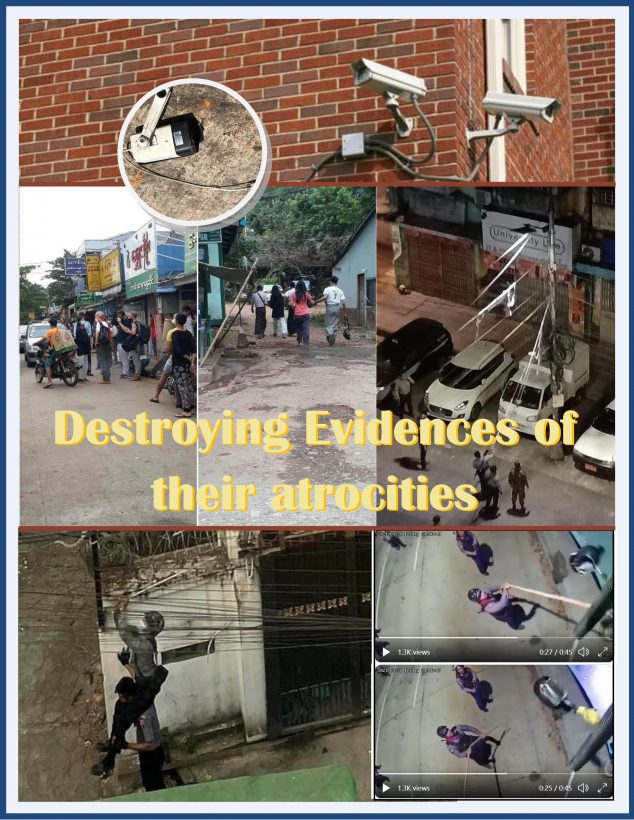 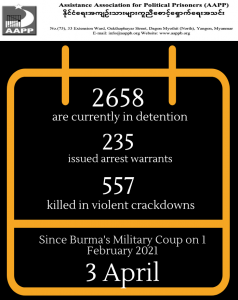 As of 3 April, (557) people are now confirmed killed by this junta coup. The Assistance Association for Political Prisoners (AAPP) compiled and documented (7) fallen heroes today. (4) died on 3 April. (3) were killed on previous days and documented today. This is the number verified by AAPP, the actual number of fatalities is likely much higher as the death toll continues to rise. We will continue adding as and when.

As of April 3, a total of (2658) people are currently under detention; of them (38) are sentenced. 235 have been issued arrest warrants. AAPP documented and compiled (17) people today, (110) were released previous days but confirmed today which is why the number of detainees has decreased.  We are verifying the recently released detainees and continuing to update the lists.

People across Burma continued striking for the end of dictatorship, for democracy and human rights. Townships with momentus strikes fell victim to the most brutal crackdowns by the junta, but everywhere is being violently suppressed.

Last night civilians were injured in arbitrary shootings by junta forces, in Mandalay City, a man was shot in Manaw Hayi 58 street and is in critical condition.

The terrorist junta group use live ammunition during the day and night, they capture and violently assault. Community guards in quarters, especially youths from strikes defense teams have been captured. Today, they tried to arrest strikes’ leaders, activists, and the people’s defense team from six townships in Yangon. Last night at Yuzana Garden City, Dagon Seikkan township, twelve defense liners youths were beaten, arrested and threatened – “if you dare look up, you will be killed”. Moreover, six community guards in Thaketa township were captured, during arrest the junta demonstratively tortures detainees. In the early morning, the compound door of a doctor’s house was destroyed, reportedly dragging the doctor tying up his hands at the back and blindfolding his head with black plastic bag in Mayangone township, Yangon Region.

Vandalism by the terrorist group is deteriorating. In the early morning, Basic Education High School No. (33) in Aung Myay Thar Zan township in Mandalay were burnt on fire and last evening, the house of Dr. Zaw Wai Soe, the Union Minister of the Committee Representing of  Pyidaungsu Hluttaw was arsoned by fire rings. This incident was reported by phone to Bahan police station, the response and conduct was – “no one must go out, no one must extinguish”. In Mawlamyine, Mon State, the military and so-called police interrogated volunteers of Mawlamyine Relief Society on their knees and hands up last night.

The terrorist regime continues its offensive wars in ethnic areas despite their announced unilateral ceasefire. Today, there were armed clashes between Kachin Independence Army (KIA) and the coup military in Mogaung township, Natmatee town and Mayan village in Kachin State. Local residents remain in danger of heavy artillery. Last night in Thahton Township in Mon State, the coup military used heavy artillery resulting in the injuries of a grandmother and a man, collapse of village clinic, school and houses and a grocery store burnt on fire in three villages of Thahton township.

Since the coup, the terrorist group has committed mass atrocities and war crimes. They daily arrest, disrespect human dignity, prohibit the right to medical treatment of injured person, drag away dead bodies, torture, arbitrarily interrogate and open fire on ambulance and charity vehicles, raid hospitals and clinics. Furthermore, ethnic people are being displaced due to offensive war by the junta and deaths and injuries are increasing. Unless effective action for accountability is taken against the junta’s atrocities, innocent  people in Burma will be suffocated with wicked human rights violations every day and every second.