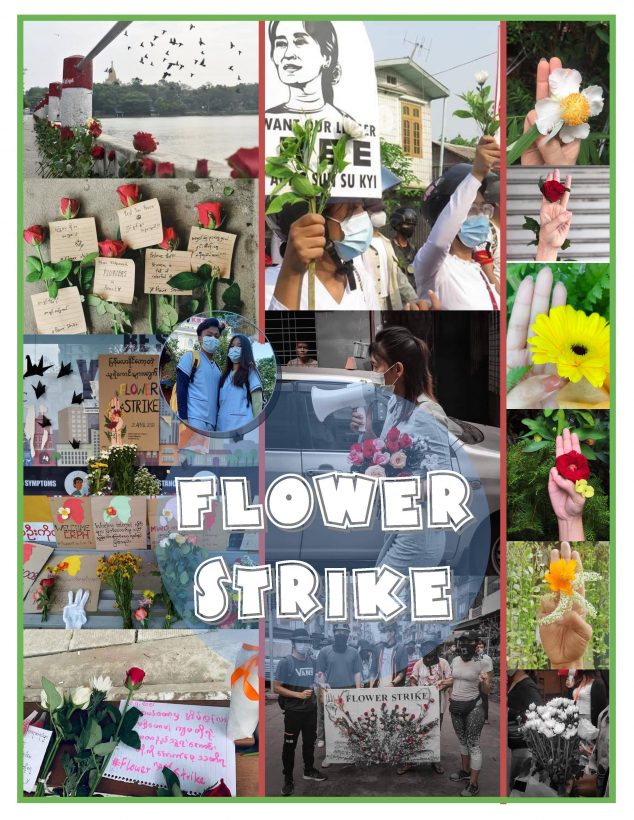 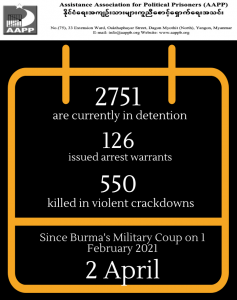 As of 2 April, (550) people are now confirmed killed by this junta coup. The Assistance Association for Political Prisoners (AAPP) compiled and documented (7) fallen heroes today. (2) died on 2 April. (5) were killed on previous days and documented today. This is the number documented and verified by AAPP, the actual number of fatalities is likely much higher as the death toll continues to rise. We will continue adding as and when.

As of April 2, a total of (2751) people are detained in relation to the attempted military coup on February 1, of them (38) are sentenced. A further (126) people have been issued arrest warrants. We are verifying the recently released detainees and are continuing to update the list of names who were released.

Last night junta forces ordered internet providers to shut down all wireless broadband services until further notice. Alongside the 47 nightly internet cut and 18 days of a mobile data shutdown. As a result, only a small percentage of individuals can access the internet in Burma. These  oppressive measures intend to even further disrupt internal communication and silence the voice of the people. They block communication with the international community to hide the junta’s atrocities from the outside world. In the UN Security Council statement yesterday they “expressed deep concern” at the “rapidly deteriorating situation” in Burma. The situation is clearly worsened further, all UNSC members must not simply witness these ominous signs, but take immediate and forceful action which align with the Special Envoy and Special Rapporteurs urgent recommendations.

On April 2, anti-military dictatorship protests across Burma endured, a Flower Strike dedicated to the Spring Revolution fallen heroes who could not return to their homes was held in Yangon. Yet killings, injuries, detentions and arbitrary raids also continued. At about 2am this morning, the junta forces raided strike quarters in Quarter 13, Tamu township, Sagaing Region, killing one policeman participating in CDM whose dead body was taken away.

The situation in Yinmar Bin township, Sagaing Region is tense, villagers had created barricades, but beginning 3am this morning, over 400 junta troops raided and shot at anti-coup strikes in Thit Ywar Pin village. As is reportedly known, three villagers were seriously injured and lacked medical treatment.

In Thapyay Aye village, military and so-called police came to the village to arrest the monk, villagers tried to stop this. So the junta shot and injured six villagers, one of them is reportedly in critical condition. Junta forces then took six villagers as hostage to demand the monk give himself up.

On March 31, a female staff member of Shinhan Bank (South Korea Bank) was arbitrarily shot, she died this morning on April 2. At around 10pm on April 1, the police and military stormed and shot at community guards in Swan Chat Quarter, Sagaing Region, one man was killed and another reportedly wounded.

The death and injury toll is increasing as the regime committs to perpetrating its policy of torture. In Pathein street, Sanchaung township, Yangon Region, a gang of so-called police beat a youth and dragged him along, leaving him on the edge of the street, the people took on a severe risk to rescue him. At night on 31 March, the junta forces also raided 104 Ward in South Dagon township, and assaulted the men with gunstocks. A woman 5 months pregnant was shot and injured inside a house by random but malicious gunfire.

Civil servants participating in CDM were also threatened, beaten and abducted. In Myeik, Tanintharyi Region, two education staff participating in CDM and evading arrest were arbitrarily detained and assaulted at around 1am on the morning of 31 March. They were reportedly charged under Penal Code Section 505(a).