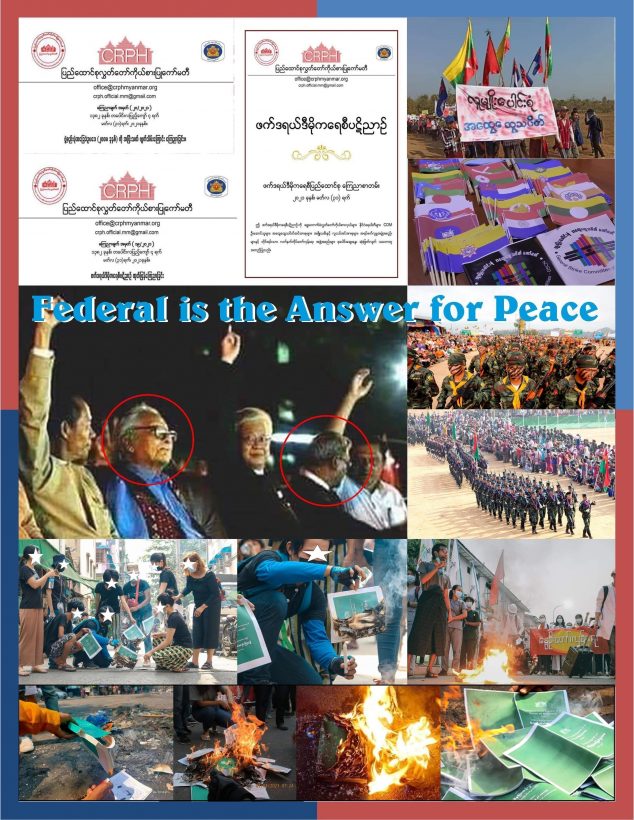 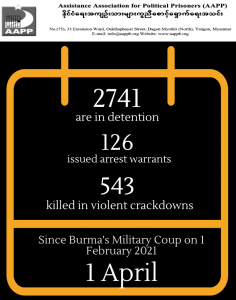 As of 1 April, (543) people are now confirmed killed by this junta coup. The Assistance Association for Political Prisoners (AAPP) compiled and documented (7) fallen heroes today. (5) died on 1 April. (2) were killed on previous days and documented today. This is the number documented and verified by AAPP, the actual number of fatalities is likely much higher as the death toll continues to rise. We will continue adding as and when.

As of April 1, a total of (2741) people are detained in relation to the attempted military coup on February 1, of them (38) are sentenced. A further (126) people have been issued arrest warrants. We are verifying the recently released detainees and are continuing to update the list of names who were released.

It has been two months since the military coup on April 1 when people began to endure all kinds of atrocities committed by this terrorist SAC group, yet people are still fighting to end dictatorship and achieve democracy, though casualties and arrests are rising day after day.

The Pyidaungsu Hluttaw Representative Committee (CRPH) is the official new government and yesterday announced the Federal Democracy Charter to form a collaborative National Unity Government in the first week of April in order to achieve a federal democratic union. It also repealed the 2008 constitution, which not only intended to prolong military dictatorship, but hinder the emergence of a federal democratic union. AAPP welcomes the release of these statements, which are crucial to the establishment of a future federal union and will continue to work together for democracy and human rights.

Action is begining by the international community towards Burma, however China rejected an imposition of sanctions at a crucial closed-door session of the UN Security Council on March 31. We could expected China to reject such a proposal. But this encourages continued crimes against humanity in Burma, democratic development in Burma has been ruthlessly obstructed in the interests of China.

On 1 April people across Burma continued to protest against the military dictatorship. Monywa Township, Sagaing Region, the main strike in Monywa was violently cracked down, one civilian was shot dead in the head and six others were injured. In addition, some houses were raided. In Mandalay City, a man was shot dead in the head and his body taken away by the junta forces. Moreover, one man was also shot in the abdomen and died. The military and so-called police also destroyed barricades and opened gunfire, resulting in at least five civilians getting injured. In Yankin Township, Yangon Region, a strike was cracked down, but no one was arrested and injured.

Yesterday evening, due to unprovoked shooting by the junta forces, one bank staff from the Yangon-based South Korean bank “Shinhan Bank” was shot in the head and is in critical condition. In Gangaw Township, Magway Region, the junta forces blocked the town and shot gunfire, four civilians were killed and many others injured. The exact number is not yet confirmed.

Junta forces have threatened health workers from the clinics and hospitals to not give medical treatment to these injured persons. Acts of inhumanity by this terrorist regime shows it is practicing the path of raw dictatorship. The Mandalay Chief Minister Dr. Zaw Myint Maung, who is suffering from leukemia, needs timely treatment for cancer. However, the Chief Minister’s health condition is also a matter of concern because of whether he is available to access medical care or not.

It is extremely worrying that deaths after arrests and torture continue to occur daily under this junta, which in particular has targeted and persecuted NLD members among others. Yesterday, the military and so-called police raided a house and arrested eight NLD members who were hiding, including three MPs of the Irrawaddy Division Hluttaw. We are rightly worryied they will be tortured while in detention. In Taunggyi Township, Shan State, a man who was arrested for no reason died in interrogation due to torture. In Insein Township, Yangon Region, victims shot by bullets were dragged away yesterday evening and last night. In Bahan Township, Yangon Region, a detainee was kicked, beaten, and slapped. In Hlaing Township, detainees were beaten, forced to have their hands on the head and kneel down on the ground. In Sanchaung Township, Yangon Region, the junta forces destroyed private properties on the streets and threatened to shoot and abused verbally without cause the  people if they turned on lights.

Today, the Ruby Mart and Gandamar Wholesale in Rangoon, run by the junta-owned business, caught fire. The blaze coincided with the arrival of Clarissa Ward, a chief international correspondent for CNN and the public is certain to be accused of vandalism. This is the method used by successive military dictators. This morning, the chief correspondent visited here. When “Ruby Mart” was engulfed in flames, the local residents went out to help to stop the fire, the junta forces shot at them, one civilian was killed and two civilians arrested.