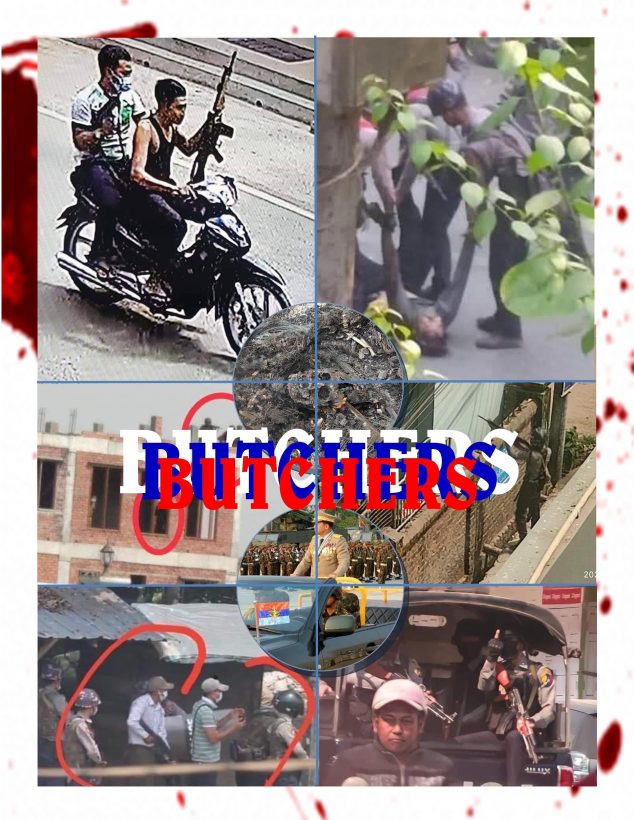 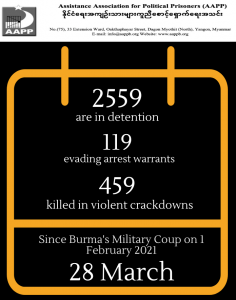 As of 28 March, (459) people are now confirmed killed by this junta coup. The Assistance Association for Political Prisoners (AAPP) compiled and documented (36) fallen heroes today, 13 died on 28 March. Children, students, youths and civilians have all been killed since the coup.. This is the number documented and verified by AAPP, the actual number of fatalities is likely much higher as the death toll continues to rise. We will continue adding as and when.

As of March 28, a total of (2559) people are detained in relation to the attempted military coup on February 1, of them (37) are sentenced. A further (119) people have been issued arrest warrants. We have not completed verification of all recently released detainees over the last 4 days, but are continuing to update the list of names who were released.

Yesterday, the illegitimate military regime viciously killed unarmed civilians, including children. Over 100 civilians, some were shot and killed in night-raids in towns without reason.

Last night, at least five civilians were killed and thirteen civilians injured in Tharkayta Township, Yangon Region, Taunggyi Township, Shan State, Mogok Township, Mandalay Town, Mandalay Region, Pathein Township, Ayeyarwady Region, and Tatkon Township in Nay Pyi Taw, from unprovoked shootings by junta troops. One of those killed last night in Mandalay City was serving as a security guard in the ward. He was shot and dragged onto a fire of car tyres and burnt him alive. This inhumanity is a tactic of the junta to create a climate of fear among the people. Around 60 houses in Pyi Gyi Dagun Township were destroyed by fire yesterday and people in nearby neighborhoods were prevented from helping when the junta shot at them.

The junta is using grenades, not just live rounds but machine-guns in urban areas, to create a combat zone of peaceful residential homes. Yesterday, in Kyauk Myaung Ward, Tamwe Township, Yangon Region, the junta forces used a grenade on a young man who died on the spot. Last night, the junta propaganda MRTV television station claimed this was done by an artist who was violently arrested during the crackdown in Kyauk Myaung Ward. Today (March 28), the junta forces used a grenade in Hlaing Township, resulting in one man’s hand being cut off from the wrist and another person injured.

According to the international laws, hospitals, religious buildings, schools, women, and children are given special protection, however since the coup, the illegitimate military regime completely disregards this. Today, one hospital staff was injured and patients terrorized as  gunfire was opened inside the Asia Royal Hospital, where youth protestors had fled to. Yesterday, the junta forces inhumanly looted dead bodies and forced their families not to celebrate public funerals but with family members and 5 monks. Some families therefore quickly buried their loved heroes to prevent the junta from looting their bodies.

The illegitimate military regime uses many tactics of intimidation, they destroy and loot public and private property on a daily basis. In Dagon Seikkan Township and Tharkayta Township, Yangon Region, over 20 private cars were destroyed. The junta raided a store and stole food in Thingangyun Township, Yangon.

In the ethnic states, local residents fled their villages due to conflict between the junta and ethnic armed groups. Last night, two junta planes hit the headquarters of the Karen National Union’s 5th Brigade, leaving three residents dead and others forced to flee whilst their houses burned down.

As long as the dictatorship continues, many lives will be forced to be sacrificed in Burma’s struggle for democracy. Currently, unarmed civilians need special protection, but they face multiple threats on a daily basis without any protection.