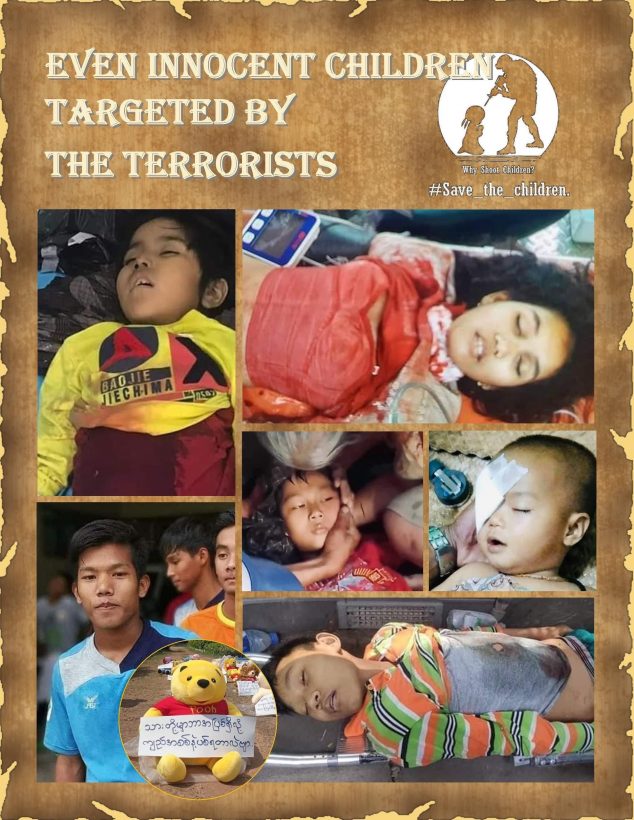 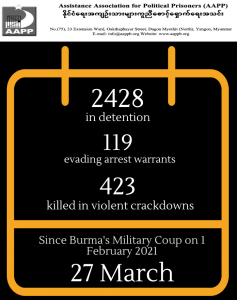 As of 27 March, (423) people are now confirmed killed by this junta coup. At least (90) were killed today, the Assistance Association for Political Prisoners (AAPP) compiled and documented killings of children, students, youths and civilians. This is the number documented and verified by AAPP, the actual number of fatalities is likely much higher as the death toll continues to rise. We will continue adding as and when into our newly separately published lists. In addition, (5) others were confirmed killed on previous days.

As of March 27, a total of (2428) people are detained in relation to the attempted military coup on February 1, of them (24) are sentenced. A further (119) people have been issued arrest warrants. We have not completed verification of all recently released detainees over the last 3 days, but are continuing to update the list of names who were released.

Last night, the junta propaganda MRTV television station threatened the people they could be shot dead in the head and to the back if they strike. Today was known as a “Nationwide March Revolution”, people across Burma bravely protested against the military dictatorship knowing they risked their lives. The junta shot at peaceful protesters since the early morning, the most deadly day in the 55 days since the coup. Many civilians, including children, were shot dead and injured.

In Meikhtila Township, Mandalay Region, a 13-year-old girl was shot dead while she was inside her house. This is the second child to be shot dead in the house after a 7-year-old girl from Mandalay Town. In Dawei Township, Tanintahryi Region, while a 16-year-old boy was driving a motorcycle, he was shot at from an unmarked car driven by junta forces, and his body dragged away. The boy died due from not receiving medical treatment in detention. The fact the illegitimate military regime is targeting children is a grave act of inhumanity. Children’s dignity and right to life are being threatened on a daily basis by this junta’s violence.

Moreover, reporters who are broadcasting live also are targeted. Today in Kyeikhto Township, Mon State, while a reporter was reporting live on the crackdown, he was shot and injured, including a real bullet wound to the leg.

Today, the junta violated diplomatic ethics by opening gunfire at the American Center in Yangon.

Some shot dead bodies were dragged away and not returned to their families to erase all evidence of military crimes today. Injured people were taken away and given no medical treatment, later dying while in detention. Including girls, those arrested are beaten on the streets. The illegitimate military regime uses many tactics of intimidation, they destroy and loot public and private property. In Dagon Seikkan Township, Yangon Region, a young man who was bleeding was dragged away. In Mandalay Town, a civilian who was shot in the head was dragged away.

Today, many towns in Burma were created into a combat zone, but were in fact killing fields of unarmed civilians, shot without mercy. The illegitimate military regime must take responsible and accountable for each and every crime it commits. As long as the international community fails to decisively protect Burma’s people, the junta’s inhumanity will deteriorate.