Daily Briefing in Relation to the Military Coup 53 Days ago 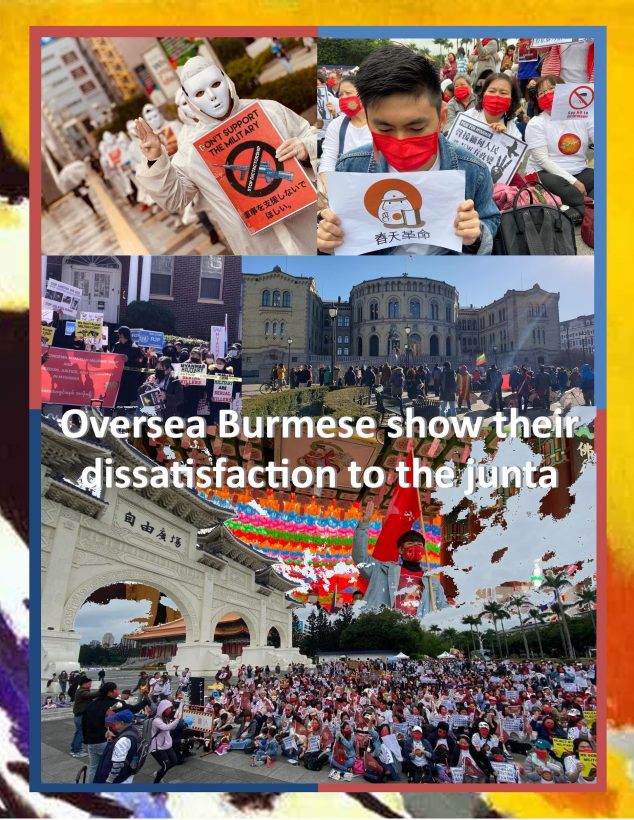 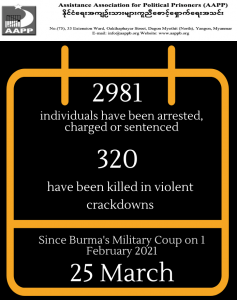 As of March 25, a total of (2981) people have been arrested, charged or sentenced in relation to the attempted military coup on February 1. (320) people are now confirmed killed by this junta coup.  AAPP documented (34) fallen heroes today, 11 who were killed on March 25.

(24) of the recent detainees have been convicted. (109) have been charged with a warrant and are evading arrest. We have not completed verification of all recently released detainees over the last 2 days, but are continuing to update the list of names who were released. Fallen heroes  were shot dead today in Thingangyun Township in Yangon, Khin-U Town in Sagaing Region, Mohnyin Town in Kachin State, Pyu Township in Bago Region and Taunggyi City in Shan State. (23) were killed on a previous day but added on 25 March. This is the number documented and verified by AAPP, the actual number of casualties is likely much higher. We will continue adding as and when.

Since yesterday’s silent strike, night protests were held in a number towns, some of which were violently cracked down. People were shot to death, injured, and arrested. In Kyaukpadaung Township, Mandalay Region, a youth was killed. In Mandalay City, a 16-year-old child was killed and some others injured. In addition to this, ambulance vehicles also were shot at unprovoked.

Today in Taunggyi Township, Shan State, the junta used live ammunition, trying to create a combat zone of residential areas, resulting in four civilians shot and killed, one dead body was dragged away, some other civilians were injured. Moreover, junta forces raided houses and violently arrested youths and civilians, thereafter destroying motorcycles, cars and barricades. They stormed streets unprovoked, shouted obscenities and vandalized property. In Mohnyin Township, two men were shot to death. In Myitkyina Township, three civilians were arrested, and others were injured and arrested during the crackdown and raids. 2 people were shot to death in Khin-U Town in Sagaing Region, and some others injured. In Thuwanna, Thingangyun Township, many junta troops entered the ward and raided houses, fired weapons resulting in two civilians being shot dead, 13 civilians were injured. In Phyu Township, Bago Region, the Pyithu Hluttaw MP, U Kyaw Aye Win’s son was arrested at home, people therefore demanded his release, but the junta forces used live ammunition to suppress them, resulting in a second-year student being shot dead in his abdomen. Two out of the 13 are in serious condition, and at least 20 civilians were arrested. The number of known injured and arrested persons is expected to increase.

Even though the illegitimate military regime detained some 100 employees of shopping malls and department stores, including Organe and Sein Gay Har on the afternoon of 24 March, they have not yet been released. Today, Dawbon Township Yangon, military and so-called police raided the house of the former political prisoner and did not find him, therefore, they arrested his father and younger brother. Last night in Ward 33, North Dagon Township, the junta raided an activists’ home to arrest him but he was not home. His father was instead taken as a hostage.

Yesterday (March 24), the 47-member Human Rights Council adopted resolutions on Burma without a vote calling for the release of the arbitrary detained including President U Win Myint, and State Counselor Daw Aung San Suu Kyi. The Assistance Association for Political Prisoners welcomes this move and working with the Special Rapporteur on Myanmar.