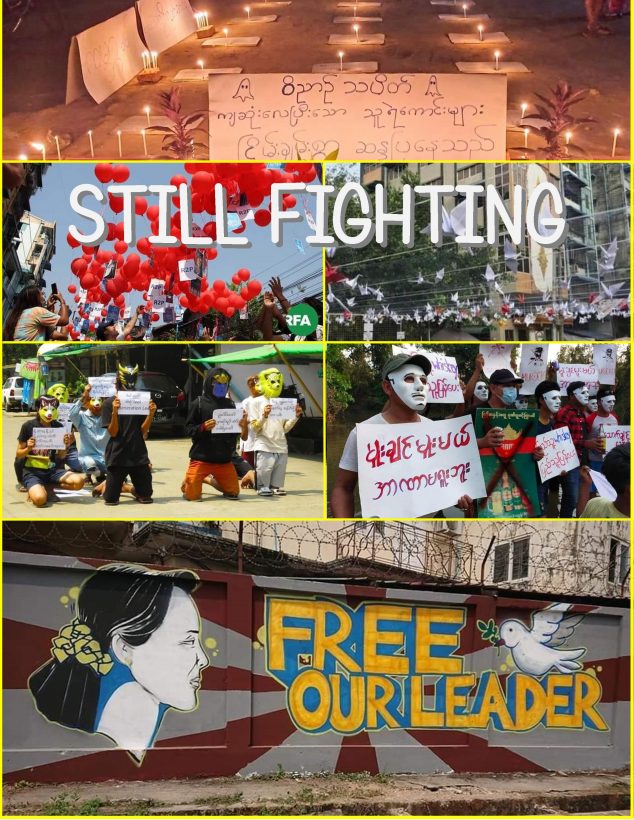 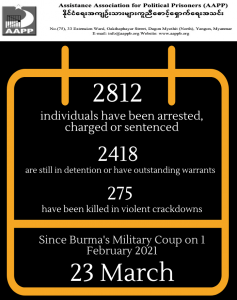 Today, the Assistance Association for Political Prisoners (AAPP) has compiled and documented (14) heroes. Of these, (3) were shot dead in Mandalay and (1) were struck by a military vehicle travelling at high speed in Dawei in Tanintharyi Region. (10) were killed on a previous day but added on 23 March. (275) people are now confirmed killed by this junta coup. This is the number documented and verified by AAPP, the actual number of casualties is likely much higher. We will continue adding as and when.

As of March 23, a total of (2812) people have been arrested, charged or sentenced in relation to the attempted military coup on February 1. Of them, (24) were convicted. (109) have been charged with a warrant and are evading arrest, (394) were released. A total of (2418) are still under detention or have outstanding charges/evading arrest, including the (24) sentenced.

In today’s detainee list, we received and documented the names of (130) people. However, more were arrested today, AAPP will continue investigating these and make appropriate announcements when.

Today, despite the illegitimate military regime continuing crackdowns, anti-coup protests have taken place across Burma. The crackdowns in Mandalay were severe and three civilians, including a 7-year-old girl, were killed. The girl was shot dead at home. Putting children in harm’s way is a clear violation of the terms of the Convention on the Rights of the Child (CRC). It has been three days since the protests in Mandalay, and according to AAPP at least 21 civilians were killed here between March 21 and 23. A man was killed while he was standing to cross the road by a military vehicle in Dawei Township, Tanintharyi Region.

In Kyanginn Township, Ayeyarwady Region, when a man who was serving as a night watchman, the so-called police attacked and arrested him, thereafter , the local residents went on the road and demanded his release. The military and so-called police fired more than 50 rounds of live ammunition, resulting in 2 civilians getting seriously injured and 7 civilians were violently arrested.

The junta has been raiding, arresting and shooting all day and nights as well as looting, destroying and vandalizing. Last night (March 22), they raided Nwel Aye Quarter, Dawpone Township, Yangon Region. They verbally abused the residents and shot aimlessly at the houses resulting in many injured people. Moreover, the junta destroyed public properties, cars, shops, and houses. This morning, they came back to Nwel Aye Ward and arrested people.  Furthermore, in Mandalay, the military raided and destroyed a house with a bulldozer and stole two phones and money in the afternoon yesterday. At night, they arsoned the people’s barricades and threw fire rings into Aung San Quarter, Insein township at around 1:30am today, leading to two houses burning down.

The terrorist junta also shot at and stormed Hana Microfinance, the South Korean loaning department, which provides loans to farmers, and ordered them to hand over  money. The junta does not leave the disabled alone, they harassed them too, in one incident a disabled man living in Hinthada town, Ayeyarwady Region, was detained under section 505 (b) of Penal Code yesterday. A video of the junta destroying the trishaws of drivers who depend on daily income went viral on social media. They repressed railway staff participating in the Civil Disobedience Movement, evicting them from staff housing in Yangon and Mandalay, and today the same suppression happened to staff in Kaw Lin town, Sagaing Region. The junta, SAC, has also threatened the CDM staff in various sectors by postponing, dismissing, arresting and charging them and their job assignments.

Crimes against humanity are committed daily by the regime, the SAC attempts in every possible way to inject fear in the general people, particularly by threatening the livelihood of the people.

In the midst of this, people face physical and mental insecurities on a daily basis, yet the PEOPLE have defied for 51 days the orders of the dictatorship.