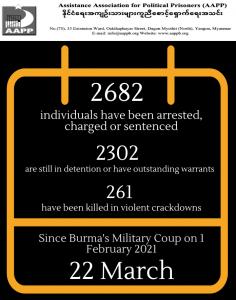 Today, the Assistance Association for Political Prisoners (AAPP) has compiled and documented (11) heroes. Of these, (3) were shot dead on the spot in Mandalay today. (8) were killed on a previous day but added on 22 March. (261) people are now confirmed killed by this junta coup. This is the number documented and verified by AAPP, the actual number of casualties is likely much higher. We will continue adding as and when.

In today’s detainee list, we received and documented the names of (17) people. However, more were arrested today, AAPP will continue investigating these and make appropriate announcements when.

The junta crackdown using live ammunition, assaults and arrests, kidnapping, using repressive legislation, and forcibly evicts CDM participants from staff housing. They do this to spread fear, but people continue to protest.

This evening, a man died in Mandalay, the crackdown had been severe yesterday afternoon yesterday, last night, protests against the military based in a Chan Mya Thar Si Township school were dispersed using live ammunition and random fire, 5 men died and 30 injured. Since this morning, the military and so-called police have continuously fired weapons towards Myayi Nandar housing, Aung Pinle, Aung Thar Yar quarters in Chan Mya Thar Si township. 3 people were killed including a young boy, Grade-8 student and more than 6 people got injured initially reportedly. The fallen child was shot when he strayed out of the house to fill the up water in front of the house. Furthermore, the junta forces arsoned barricades, and destroyed people’s cars.

A grandma aged over 60 years was killed in an unprovoked shooting by the junta forces in No.(2) quarter, Kyaw town, Yaw province, Magway Region (formerly known as Pe Ma Sar village) last night.

One of the tactics the junta practices is vicious assaults when detaining and in detention. In Taunggyi, Shan State, the military and s0-called police raided houses, arrested people, arsoned roads, and unprovoked shootings across yesterday and this morning. Yesterday, the  Taunggyi so-called police beat people on the road in a public display of violence, during which a 14 year old youth and a civilian were detained and 20 civilians injured by rubber bullets.

On March 22, in a crackdown in Natmatu, Kachin State, the junta beat the detainees including education civil servants with hard sticks and tied their hands on their backs. In addition, last night in Hakha, Chin State, military and so called police waited for the returnees from sit-in protests to be beaten. Five civilians were reportedly beaten and the fingers of two of them broken. This was not an isolated incident, similar happened elsewhere today.

Since the military coup in Burma, instability of society is everywhere and the rule of law has been completely destroyed. If the coup group stays in power, the people will be enslaved to the military for decades more. Liberty, human rights, and freedom from persecution will not exist if dictatorship remains. No dignity for people or democracy, we will only have peace and stability if revolution succeeds.