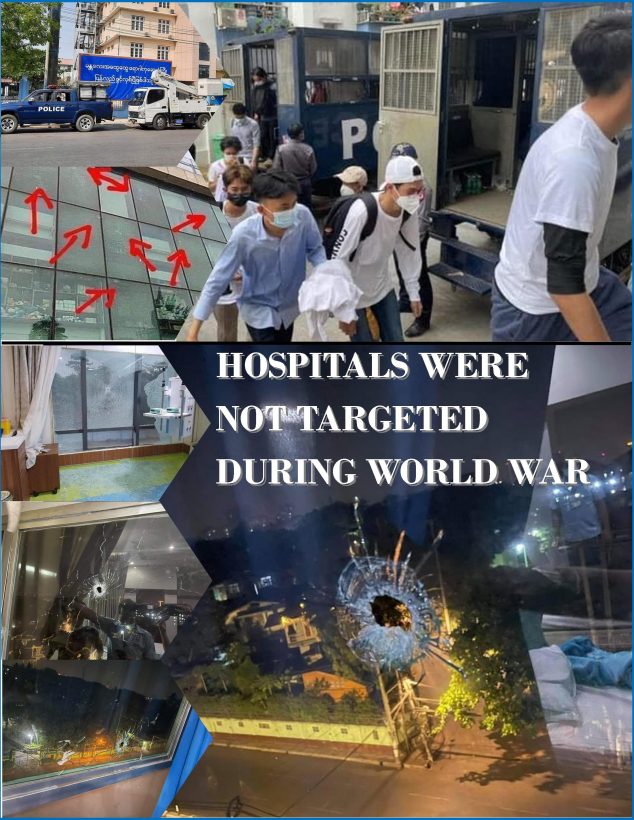 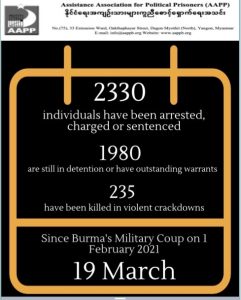 Today, the Assistance Association for Political Prisoners (AAPP) has compiled and documented 10 heroes. Eight killed today were from Aungpan Town in Shan State, one from Loikaw Town in Kayah State. One from Myingyan Town in Mandalay Region died today from previous injuries. (235) people are now confirmed killed by this junta coup. This is the number documented and verified by AAPP, the actual number of casualties is likely much higher. We will continue adding as and when.

In today’s detainee list, we received and documented the names of (72) people. However, more were arrested today, AAPP will continue investigating these and make appropriate announcements when.

It has been 47 days since the coup, and the pro-democracy movement across the country has left the junta unable to maintain political and administrative power. But the people are being severely persecuted and the inhumanity continues, these are crimes against humanity.

Yesterday, in South Okkalapa, a man, who was hiding from capture in a house, was forced to go out after threats by the military to shoot his sister’s newborn baby. Even though women, those pregnant, and children are specially protected groups, they are at risk of intimidation and persecuted at any time in Burma even though the Convention on the Elimination of All Forms of Discrimination against Women (CEDAW) was ratified in 1997. Clearly the junta is not complying with its provisions, just like in the conflict zones they create.

Human-shield are not permitted anywhere, but are practiced in countries ruled by military dictators. In Burma, successive dictators have used human-shield in conflict zones, now used toward  peaceful demonstrations. Yesterday in Hlaing Township, Yangon Region, three people arrested by security forces were used as a human shield in a raid against a demonstration. Military battalion 77, notorious for committing gross human rights abuses, is now stationed in Yangon to crackdown on protest strongholds. Today, 77 Battalion troops arsoned shops and public shelters and looted food in Kamarkyi, Thuwunna Town, Yangon.

Today, junta troops subjected detainees to inhumane treatment on the Satipadhan road in Tamwe Township. Two detained men were forced to carry sandbags, when one of the men could not, he was forced to crawl on the ground, and beaten on the road by the so-called police.

The military and so-called police loot and destroy public and private properties on a daily basis. Yesterday in Tuntay Township, the military and so-called police entered villages and looted valuables worth hundreds of thousands. Last night in Thingangyun Township, people were threatened they would be shot dead and vehicles destroyed, and verbally abused by the junta forces. In addition, SSC (Women’s Center) in Shwegondaing was also shot at without reason.

Casualties, and unprovoked shootings are increasing day by day. Last night in North Okkalapa Township, Yangon and Mandalay City residential areas were raided and shot at without reason. Two civilians, including a woman died. 4 civilians were injured in Dawbon Township in Yangon.

We urge the international community to effectively intervene to bring this inhumanity to a halt.