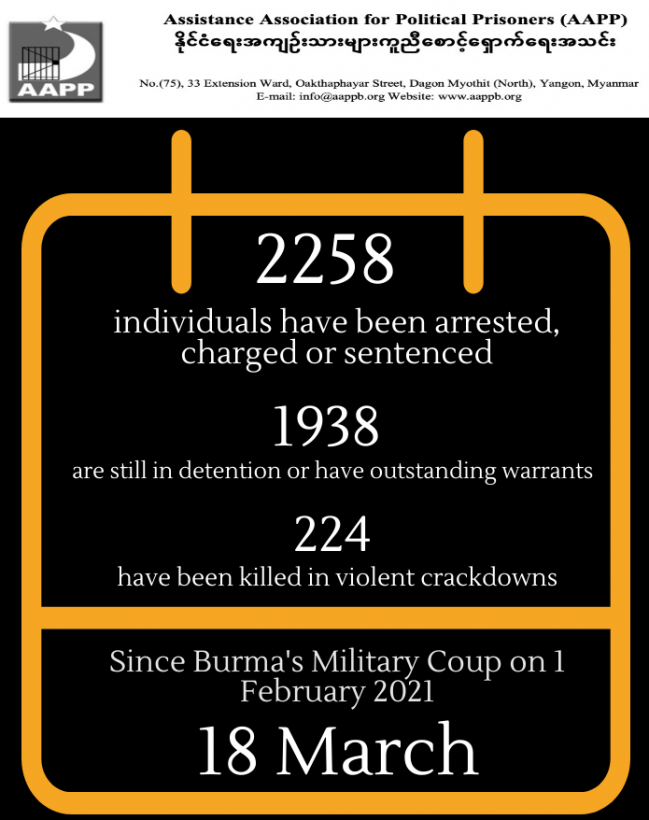 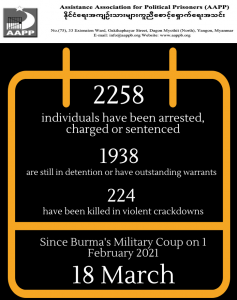 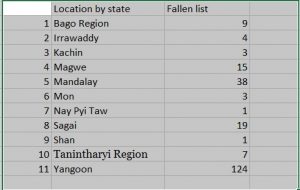 The Assistance Association for Political Prisoners (AAPP) has compiled and documented three heroes. One killed today was from North Okkalapa Township in Yangon, two others from Monywa Township in Sagaing Region and Bago City in Bago Region died today from previous injuries. Four civilians who were killed on previous days have also been added and thus bringing the number to (224) people confirmed killed by this junta coup. This is the number documented and verified by AAPP, the actual number of casualties is likely much higher. We will continue adding as and when.

In today’s detainee list, we received and documented the names of (67) people. However, more were arrested today, AAPP will continue investigating these and make appropriate announcements when.

The juntas’ terror tactics against residents continue at night, killing, torture, destroying public and private property. The military loot and forced labor onto people, the junta indoctrinates a climate of fear and subordination.

On 18 March, in South Okkalapa, Thingangyun on Yadanar Road, Ahlone, Mayangone Townships, Yangon, residents were photographed being forced by the military to remove sandbag barricades and stickers from the streets. This is not an isolated occurrence. Across inner and outer Yangon, nearby residents are assaulted and forced at gunpoint into doing the military and so-called police bidding. Moreover, the military and so-called police destroyed the public properties such as signboards, vehicles, motorcycles etc.

The illegitimate military regime uses torture as its weapon, perpetrating various physical and mental forms during detention. Casualties from this are gradually increasing. In Monywa Township, Sagaing Region, an officer of the Forest Department was arrested on March 15 for participation in the civil disobedience movement. Tun Htet Aung died this morning because of brutal torture. Today the junta forces brutally cracked down in Kyauk Myaung Ward, Tamwe Township, Hlaing Township, Mayangone Township and Hlaing Tharyar Township in Yangon Region. Non-protesting people, including civilians and vendors were arrested, beaten, forced to put their hands above their heads and sit in the sun and do leap frogs. Vendors’ goods also were looted by the junta forces. Moreover, during the crackdown in Kyauk Myaung Ward, a 13-year-old girl was shot with live ammunition and her body taken by the junta forces. A man who went to sell gold due to his poor condition in South Okkalapa, was shot without cause yesterday. He was taken away with injuries by junta forces, and today reported dead. Yet his body and his gold have not been returned to his family.

Torture is one of this military juntas’ policies. During decades of conflict, ordinary people living in the ethnic states, as well as political prisoners have been subjected to persecution and murder. The junta forces ongoing acts of violence will lead to more torture with continuous threats right to the lives and dignity of all people.

Freedom of the media in Burma is completely declined. The illegitimate military regime revoked the media licenses of five local outlets, raided media offices, and arrested and detained some journalists. All local private media outlets in the country suspended yesterday due to the various forms of repression, including lawsuits. Only the junta propaganda television stations and newspapers continue to cover their narrative. Such deliberate suppression cuts off information among the people of Burma and in order to cover their atrocities in the international community.