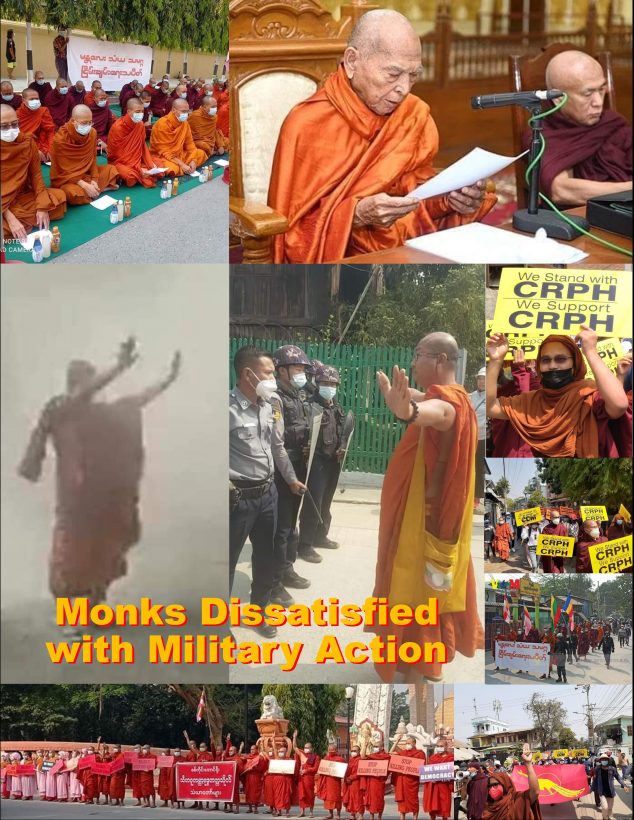 The Assistance Association for Political Prisoners (AAPP) has compiled and documented 9 heroes who were killed today. From Kale Township in Sagaing Region, Dagon Myothit (South) Township, Hlaing Township, and Mingalar Taung Nyunt Township in Yangon Region, and Mandalay Town. Six civilians who were killed on previous days have also been added. Bringing the number to 208 killed as of yesterday. (217) people are total confirmed killed by this junta coup. This is the number documented and verified by AAPP, the actual number of casualties is likely much higher. We will continue adding as and when.

In today’s detainee list, we received and documented the names of (10) people. However, more were arrested today, AAPP will continue investigating these and make appropriate announcements when.

In March, the crackdown tactics of this illegitimate military coup have violently developed, live ammunition is everywhere, junta forces shoot without cause – directly into wards and streets. People not even protesting, children and women, were now targeted.

The crackdown in Kalay Town, Sagaing Region today was extreme, with shots into the streets and squares. Three civilians who were not protesting were shot dead without reason and another protester was shot dead in the crackdown, casualties are spreading everywhere. Similarly, in South Dagon township, Yangon region, a woman protesting was shot dead in the head. Two men in Hlaing township, Yangon, and one man in Mandalay were killed from headshots. There will surely be more casualties later confirmed across the country today.

When local residents carried sand in order to build a house, the military and so-called police raided the area and shot into no.3 Koe Thaung ward, Pathein Township, Ayeyarwady Region. Then a seventh grade 11-year-old girl who lives in the Koe Thaung 3rd street was arrested. The reason was she was holding a mobile phone in her hand.

The terrorist junta forces also captured civilians and made them forced labor, pedestrians were stopped in cars at gunpoint. People were forced to remove barricades they constructed. Forced laboring happened to the employees of Shwe Kaung Kyawe tea shop in Hlaing township. In Yangon and Mandalay, junta troops destroyed the peoples’ barricades and threatened to shoot the whole ward if people made further barricades. Men from Nawaday and Kyansitthar housing in Hlaing Tharyar township, Yangon, were in addition captured.

The junta forces committ mass murder and loot and destroy private and public property, public bridges, and systematically arson. Such actions have become widespread nowadays. This happened in South Okkalapa in Yangon, Bago and Kawa last night and today. Whenever they do these violent acts, coup propaganda media the MRTV accuses the people as being perpetrators of violence.

On March 15 the Global Centre for R2P reiterated the overwhelming international and domestic calls for an arm embargo, no recognition to junta, and economic divestment from their business interests. For the massacres past and present the statement also said “senior coup leaders who bear responsibility for crimes against humanity, war crimes and genocide should face international justice”.

It was also reported today that the State Sangha Maha Nayaka Committee, the most prominent and revered monk association in Burma agreed to call for an end to the junta’s violence and release of the arbitrarily detained.