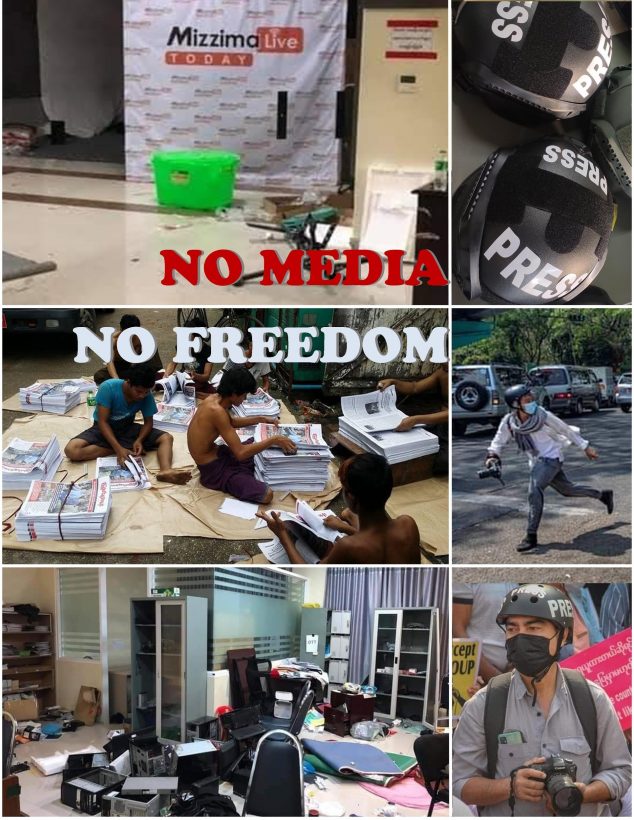 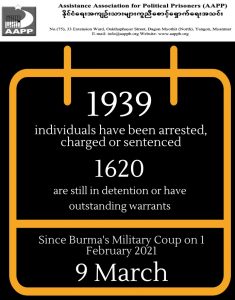 The Assistance Association for Political Prisoners (AAPP) honors the heroes who sacrificed their lives and liberty to fight for democracy, human rights and the end of dictatorship. Up until now, more than (60) people have been killed due to violent and arbitrary crackdowns.

As of March 9, a total of (1939) people have been arrested, charged or sentenced in relation to the attempted military coup on February 1. Of them, (3) were convicted; (2) to two years imprisonment, (1) to three months. (72) have been charged with a warrant and are evading arrest, (319) were released. A total of (1620) are still under detention or have outstanding charges/evading arrest, including the (3) sentenced.

In today’s detainee list, we received and documented the names of (82) people. However, more than 100 protestors including students and youths were arrested during the crackdown across the country today. We will continue to investigate these and make appropriate announcements when.

The illegal military is now increasingly repressing independent media, since February they have arrested and filed lawsuits against reporters and raided free media outlets. Last night, the junta’s propaganda mouthpiece, MRTV, announced five domestic media; DVB, Mizzima, 7 Day, Myanmar Now and Khit Thit who would have their broadcasting licence suspended. Junta soldiers raided Myanmar Now last night, and Kamayut Media this afternoon, and have since arrested one journalist from Myanmar Now and two during the raid from Kamayut Media.

These media outlets produce breaking news revealing the brutal truth of this junta, this oppression is aimed to conceal human rights violations and to weaken communication channels between free media and the public. In addition to weakening the momentum of the peaceful protests. This repression is also a signal to threaten the remaining free media. It is not in compliance with domestic law, Article 354 of the 2008 Constitution, or  international law. Article 19 of the Universal Declaration of Human Rights (UDHR), and Article 19(2) of the International Covenant on Civil and Political Rights (ICCPR) protects the right of freedom of press and freedom of expression. Since the junta does not follow its own drafted legal framework it is not a surprise they utterly disregard international standards.

Following a violent crackdown on protests in Sanchaung, Yangon the military and so-called police locked-down the entire township. Therefore by night, hundreds of protestors, particularly, students and youths were trapped inside Sanchaung. The military and so-called police used sound grenades and rubber bullets, shouted, swearing, and destroyed nearby parked motorbikes. They stormed into the houses and apartments and arrested approximately (20) students and youth demonstrators. Whilst the so-called police and military blocked Sanchaung Township, people across the city protested against the curfew in various ways until midnight when the trapped demonstrators were finally able to escape.

In addition to this incident, in Lanmadaw Township residents stopped  a suspicious looking car yesterday and found weapons inside. Thereafter junta soldiers raided some houses and captured more than 25 civilians. Recently, the military and so-called police have tortured detainees to death. Ko Zaw Myat Linn, in charge of Su Livelihood Science- Shwe Pyi Thar (a vocational institute) who was detained in an arbitrary night-time raid last night was announced dead today with injuries consistent with torture.

Article 3 of Code of Conduct of Law Enforcement Officials of OHCHR describes how law officials may “use force only when strictly necessary and to the extent required for the performance of their duty” and Article 5 lays out how law officials must not “inflict, instigate or tolerate any act of torture or other cruel, inhuman or degrading treatment or punishment”. Despite these clear standards, the junta military and so-called police do not abide, and worse THEY COMMIT TERRORIST ACTS. Accountability and punishment must be dealt to the junta but also the perpetrators of this terror.

In defiance of this terrorist junta, the public keep on protesting peacefully. Today, protests in Myeik, Tanintharyi Region, Pathein and Nyaungdon, Ayeyarwady Region, Pakokku in Magway Region, Kyaukpadaung in Mandalay, Nyaunglebin, Nattalin, and Pegu in Pegu Region, Putao and Mohnyin, Kachin State, Loikaw, Kayah State, and Ye, Mon State, were violently crackdown using rubber bullets, sound grenades and tear gas. Nearly 100 civilians were arrested and some injured. Fundamental human rights for everyone will be lost if the coup is not reversed, the junta will continue to utilize brutal means to retain power and loot our country’s wealth.

This morning, a Zabu Mittar Emergency Volunteer Service ambulance from YaNge village, Thayat Chaung township, Dawei district, Tanintharyi Region, was shot by the military and three rescue volunteers were captured. Shooting ambulance charity vehicles are in clear violation of international laws and is evidence of the disregard for humanity and brutality.

The Committee Representing Pyidaungsu Hluttaw (CRPH) declared the junta’s illegitimate coup as high treason and therefore sued them at the Supreme Court to carry on a trial in accordance with Criminal sections, 122 (1) and 124 (a)  since 4 March. AAPP recognizes the action taken by the CRPH.