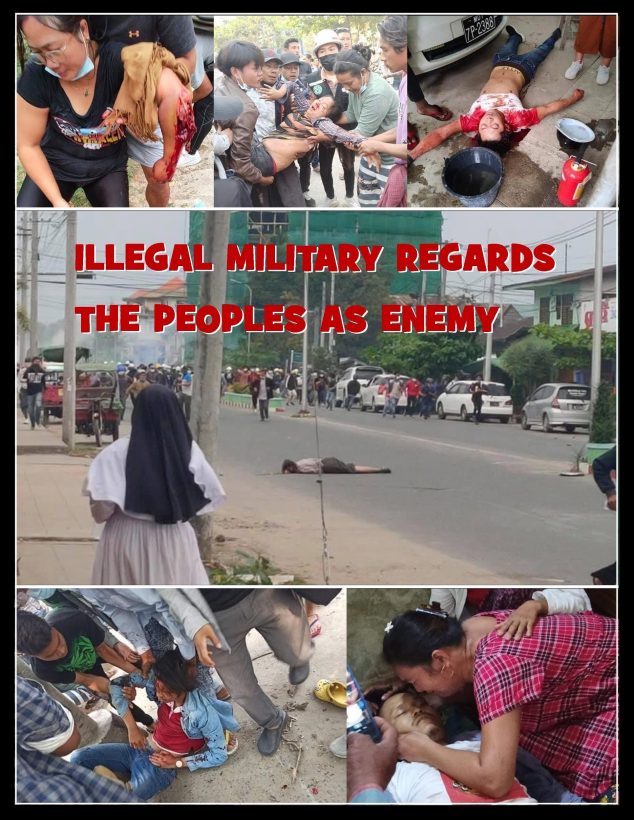 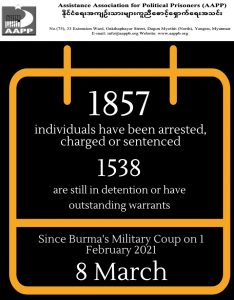 The Assistance Association for Political Prisoners (AAPP) honors the heroes who sacrificed their lives and liberty to fight for democracy, human rights and the end of dictatorship. We profoundly honour the (3) heroes from Myitkyina and Pyapon, who died today. Up until now, more than (60) people have been killed due to violent and arbitrary crackdowns.

As of March 8, a total of (1857) people have been arrested, charged or sentenced in relation to the attempted military coup on February 1. Of them, (3) were convicted; (2) to two years imprisonment, (1) to three months. (70) have been charged with a warrant and are evading arrest, (319) were released. A total of (1538) are still under detention or have outstanding charges/evading arrest, including the (3) sentenced.

In today’s detainee list, we received and documented the names of (1) people. However, more than 100 protestors including students and youths were arrested during the crackdown across the country today. We will continue to investigate these and make appropriate announcements when.

Especially the case in Myitkyina Township. Two men were shot dead in the head and one woman was seriously injured in her arm. In Pyapon Township in Ayeyarwady Region, one civilian was shot dead in the abdomen and six others were injured, including two with serious injuries.

In Mandalay, peaceful protestors were hit by two military vehicles, six were injured, including two with serious injuries. The wounded were then again beaten by so-called police and soldiers, and people in the area were chased away.

Severe human rights violations were committed by the military and so-called police against the general public particularly innocent students and youths as public areas turn into killing fields. AAPP urges the international community to take urgent action to protect these innocent peoples’ lives, democracy, and for an end to dictatorship.

The illegitimate junta is assaulting civil society organizations, volunteer organizations and human rights organizations supposedly opposed to the coup. Thereafter the Free Funeral Service Society in Yangon was raided, so too was the office of the 88 Generations Peace and Open Society by ten lage military vehicles and seven small cars this morning. The perpetrators, the military and so-called police raided the place and stole lock safe, computers, office supplies, and pictures. The junta does this to organizations which support peaceful protestors and are known internationally with members issued warrants or captured. Leading to great worry among other organizations.

Last night, they shot gunfire at almost all townships in Yangon and with tear gas stormed houses, pointing guns and arbitrarily arrested protesting students and youths. This also happened outside Yangon, including Mandalay and Monywa. This is an attempt to create a climate of fear, to stop the anti-dictatorship demonstrations and perpetuate authority through terrorism.

Since March 6, so-called police and military have been stationed in some parts of Yangon, raided hospitals, university campuses and pagoda campuses in other states and regions last night. The deployment of troops is intended to increase the frequency and ability of night-time raids and violent crackdowns.

Article 15 of Geneva Convention declares these stationed locations including the hospitals must be safe and sound to protect and cure the injured and ill patients and civilians, International Humanitarian Law says it too. Using these safe havens as a military base is in direct violation of these laws. These areas are not used for operations. Many countries also regulate attacking these places as a crime.

If you need legal assistance, contact Aung Gyi on 09 451 529 000 from the Assistance Association for Political Prisoners (AAPP)