Posted on March 8, 2021  •  Posted in Reports and Statements, Statements 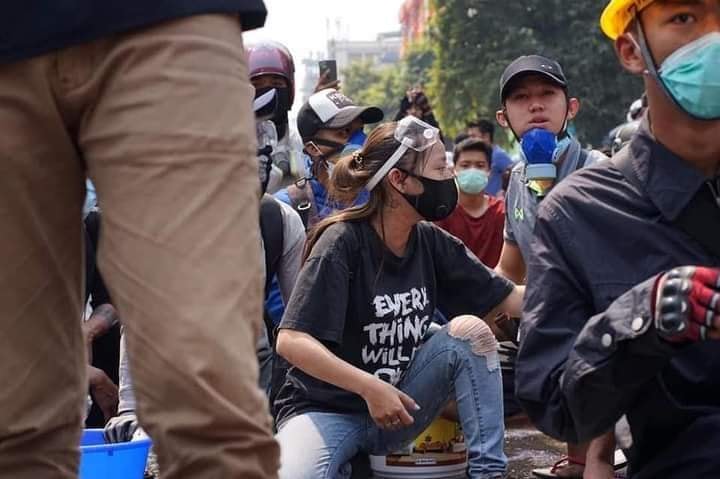 Women across the world face violence and discrimination, women must be included in the future of decision-making and top-tier positions in order to be free from these. This year, the theme for International Women’s Day is “Women in Leadership: Achieving an Equal Future in a COVID-19 World.” At a time when countries around the world are battling a pandemic, the entirety of women in Burma are fighting not only a global pandemic but also an attempted military coup. 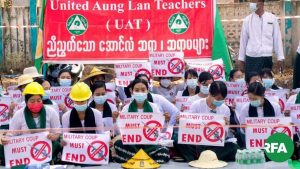 Today, women are elected heads of State or Government in 22 countries, with 24.9% representing their respective parliaments, according to UN Women. In 2019, the female representation in the national parliament in Myanmar consisted of 11.32% of the available seats. This was a significant increase from the 2010 general election in which females held just 3.5% of the available seats in Burma’s national parliament.

The interest and activism of Burma’s women in politics is evident since the days of the independence struggle and can presently be seen in the anti-coup movement. 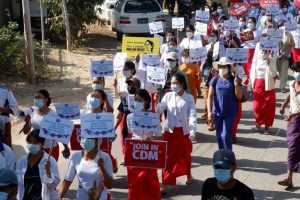 Since the attempted military coup on 1 February, the third time in Burma’s history, women, especially young girls who voted for their first time have been actively participating in the uprising. Across the country, elderly women and young girls are taking a leading role on the frontlines, they are courageous in the face of tear-gas, stun grenades, rubber bullets, and even live ammunition used by the junta. 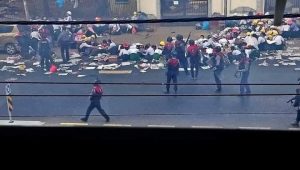 The junta forces evidently do not comply with domestic or international law, peaceful protestors have been shot in their upper body, head, abdomen, neck, back etc with live ammunition in 13 regions, states, including Naypyidaw. Women arrested during the protests have been tortured and berated by junta forces. 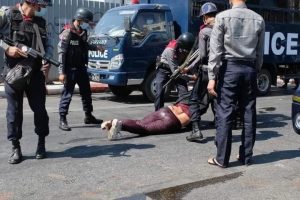 The military has severely suppressed women’s participation in political change and political activism since they seized power in violation of its 2008 constitution on 1 February. Since the attempted coup, government officials, including State Counselor Aung San Suu Kyi and other women MPs have been detained. Then came the Spring Revolution against dictatorship. Across the country, women have been taking an active role. 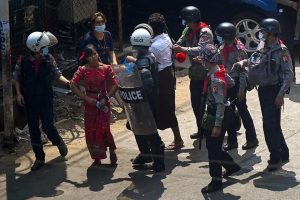 Since 1 February, a total of (518) women, including State Counselor Daw Aung San Suu Kyi and 6 female journalists have been arrested or charged. (9) of them have been charged with a warrant and are evading arrest and (79) have been released. A total of (439) are still in detention or evading arrest warrants. The above information is based on data obtained by AAPP, the number of arrests and prosecutions is likely to be higher. 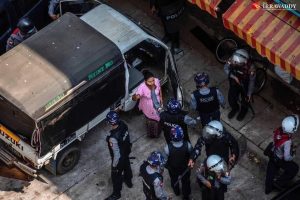 The junta is mercilessly arresting women, most arrest by so-called police who beat the detainees with batons, throwing them into trucks, raiding homes at night and abducting them. According to article 21(b) of the 2008 Constitution, “a citizen may not be detained for more than 24 hours without the permission of the court”, but hundreds of women are still being illegally detained, and not given access to lawyers. Women have also been sexually assaulted when in custody, and kept in overcrowded detention facilities with inadequate food.

Many women who fought for democracy, human rights, and the end to dictatorship have been killed, six between the ages of 19 and 59 since 1 February. They are Ma Mya Thwet Thwet Khaing from Naypyidaw, teacher Daw Tin Nwet Yee from Hlaing Tharyar, Yangon, Ma Daysi (a.k.a Apu) and Ma Kyel Sin from Mandalay, Ma Myint Myint Zin (a.k.a Kyi Lin Aye) and Ma Kyawt Nandar Aung from Monywa 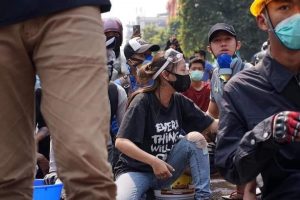 Among the dead, Ma Kyel Sin, a 19-year-old from Mandalay who was allowed to vote for the first time in the 2020 general election. She fought courageously against dictatorship to take back the opportunities she had been abruptly deprived. During theattempted coup, she fought on the front lines on a daily basis. On March 3, she was shot in the head and died on the spot during a violent crackdown by so-called police and the military on a peaceful protest in Mandalay. 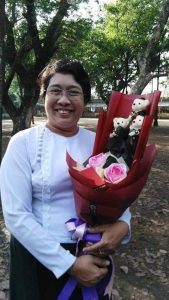 Daw Tin Nwet Yee, a 59-year-old, middle school teacher living in Hlaing Tharyar Township, Yangon joined in the Civil Disobedience Movement (CDM) after the attempted coup. The military seized power from the elected government over unsubstantiated allegations that polling-stations represented by teachers in the 2020 election were inaccurate, and Daw Tin Nwet Yee, along with other educators, acted to oppose the junta. On the morning of February 28, a teacher’ protest was violently cracked down on using stun grenades, tear-gas, and gunshots by so-called police and military in Lower Kyi Myaing Dine Road, Yangon. During the crackdown, Tin Nwet Yee was hit in the arm by a real bullet and tear gas. The teacher Tin Nwet Yee who suffers with asthma, died in the ambulance.

The Assistance Association for Political Prisoners (AAPP) pays respect to all women heroes who sacrificed their lives and liberty in the struggle for democracy. 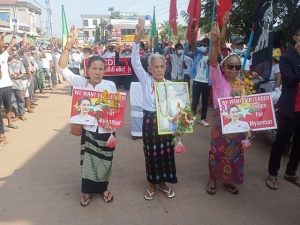 Police are meant to protect people, especially those vulnerable. Women, even the elderely and young are having their human rights abused on a daily basis by junta forces. Burma accepted The Convention on the Elimination of All Forms of Discrimination Against Women (CEDAW) in 1997. In accepting the treaty Burma pledged to commit to end discrimination against women. States which have ratified or acceded to the Convention are legally bound to put its provisions into practice. The illegitimate junta’s rejection of this treaty’s provisions every single day demonstrates its complete disregard for human rights and discrimination of women, and is yet further confirmation of the military’s illegitimacy to rule Burma.