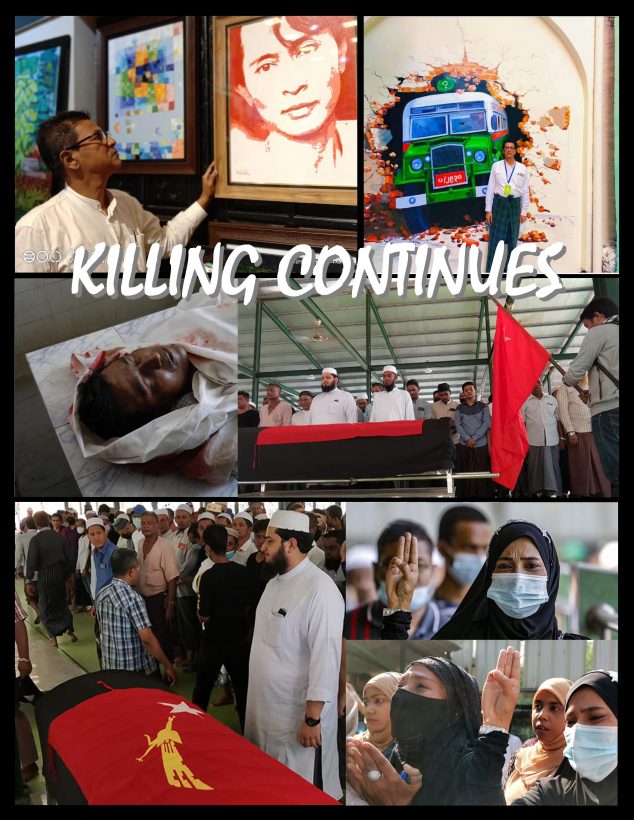 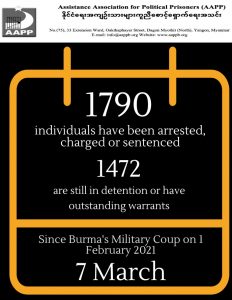 The Assistance Association for Political Prisoners (AAPP) pays respect to the heroes who sacrificed their lives and liberty to fight for democracy, human rights and dictatorship to an end. Up until now, more than (54) people have been killed due to the violent and arbitrary crackdowns.

As of March 7, a total of (1790) people have been arrested, charged or sentenced in relation to the attempted military coup on February 1. Of them, (3) were convicted; (2) to two years imprisonment, (1) to three months. (70) have been charged with a warrant and are evading arrest, (318) were released. A total of (1472) are still under detention or have outstanding charges/evading arrest, including the (3) sentenced.

In today’s detainee list, we received and documented the names of (17) people. However, more than 100 protestors including students and youths were arrested during the crackdown across the country today. We will continue to investigate these and make appropriate announcements when.

After brutal crackdowns on peaceful protests yesterday by the police and military, brutal acts continued into the night, raids into residential areas and homes, gunfire, and unlawful search and detentions. Some NLD members were targeted last night, these detentions are to deprive communities and protests of coordination and leadership. 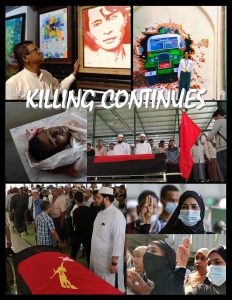 Last night, police and military raided the homes of NLD members in Pabedan Township, Rangoon, breaking down doors, opening fire at people looking out their apartments. The raids targeted the home of Khin Maung Latt, chair of the NLD party in Ward (7) in Pabedan Township who was found and detained. On the night of his arrest, Khin Maung Latt was tortured to death in his cell. They searched the home of Maung Maung, information officer of Pabedan Township NLD, but could not find him so they attacked his younger brother and put in a prone position. They searched the home of lawyer Maung Maung, vice chair of NLD Pabedan Township and took his phone and other material. Also detained were two sons of Thein Oo, vice chair of NLD Dagon Township, because they could not find Thein Oo. In Monywa, Sagaing, today they also arrested the wife of activist Nay Myo who they could not find. In Madaya Township, Mandalay Region, Ko Ko Lwin, treasurer of NLD Monywa Township was arrested last night.

Such violently beatings of  arrests and torture are beyond brutal and inhumane, they are also intentional. Tortures is prohibited across the world, however, torture to achieve confession is allowed in Burma right now. The Body of Principles for the Protection of All Persons under Any Form of Detention or Imprisonment was encated to protect detainees and convicts, yet the military junta does not follow and respect any domestic and international laws and allows its troops to commit human rights violations. We strongly condemn the death of Khin Maung Latt, chair of the NLD party in Ward (7) in Pabedan Township, as well as the hostage taking of family members, this is terrorism.

Such crackdowns are intensifying day by day, the hostility and hatred against protesting students and youth is clear in their treatment when detaining and assaulting. Today, a South Okkalapa protest was cracked down and some police were seen wielding knives. Young protestors were beaten and kicked in Kyauktada Township. Peaceful protests’ barricades were set on fire in Pauktaw Wa, Insein Township. A charity ambulance was destroyed, and a medical student was beaten and dragged away during the arrest and another one was brutally beaten and seriously injured in Mandalay.

On March 7, the junta regime violently suppressed peaceful protests stationed in public places and residential areas; religious areas; hospitals; and inside a campus. We strongly urge international action to end these military crimes as soon as possible.