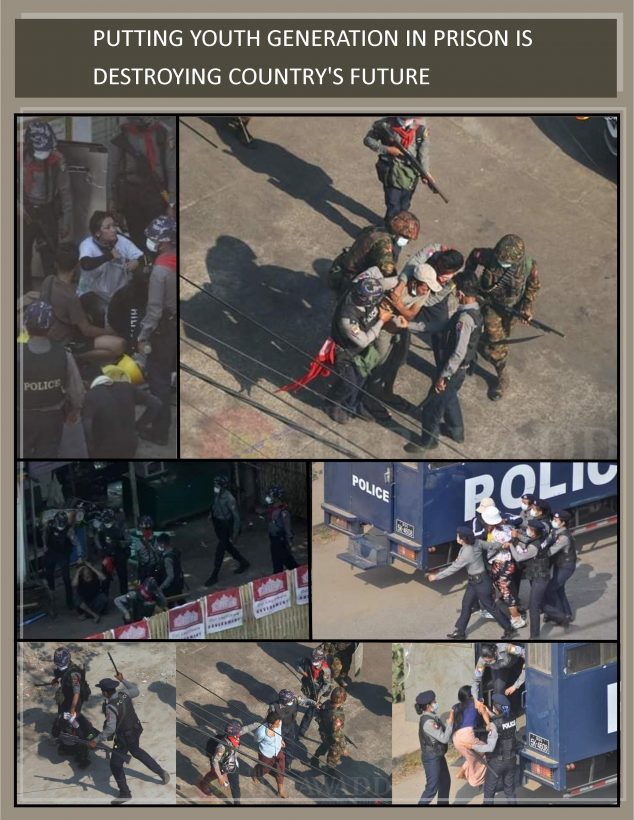 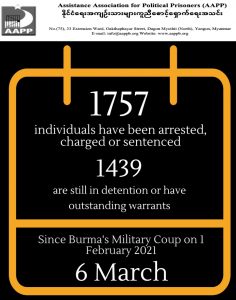 The Assistance Association for Political Prisoners (AAPP) pays respect to the heroes who sacrificed their lives and liberty to fight for democracy, human rights and dictatorship to an end. Up until now, more than (50) people have been killed due to the violent and arbitrary crackdowns.

As of March 6, a total of (1758) people have been arrested, charged or sentenced in relation to the military coup on February 1. Of them, (3) were convicted; (2) to two years imprisonment, (1) to three months. (68) have been charged with a warrant and are evading arrest, (318) were released. A total of (1440) are still under detention or have outstanding charges/evading arrest, including the (3) sentenced.

In today’s detainee list, we received and documented the names of (14) people. However, approximately 50 protestors including students and youths were arrested during the crackdown across the country today. We will continue to investigate these and make appropriate announcements when.

11 people in Kyimyindaing Township, 6 in Tharkayta, 6 in Mingalar Taungnyunt, 6 in Insein , 1 in Shwepyithar, 2 (1 student, 1 civilian)  in Kyaukmyaung and Tamwe Township, 4 in Myanaung and 3 in Myitkyina were arrested and identified today. The detainees were punched and kicked with military boots, beaten with police batons, and then dragged into police vehicles. Security forces entered residential areas and tried to arrest further protesters, and shot at the homes, destroying many.

Ko Naing Min Ko, 21, who was shot in the leg in Mandalay yesterday, died today from the police and military beatings. So-called police threw flash grenades into a building and assaulted the youths living there in their rooms, police then shot at those running away, wounding 2 escaping youths and detaining one whose was injured 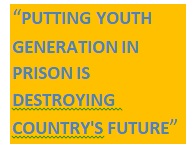 In light of the above-mentioned incidents, the so-called police and military troops are intentionally terrorizing the peaceful protesters and unarmed civilians. The coup regime is committing crimes against humanity again. Since the coup d’etat, this small military group is inflicting unjust cruelty on a daily basis against more than 54 million people to have power. There is no rule of law in Burma, people are forced to protect their communities themselves and are worried about their safety day and night.

In North Okkalapa Township, the military attempted to crush the Kanthaya boycott but were unable to enter the protest area. Tear gas was then fired into the ward near the North Okkalapa Hospital and residents in the area suffered the effects of the tear gas. Terrorist Battalion 77 set up base in May Darwe hospital in North Okkalapa township, Yangon since this afternoon, seven military vehicles and one police car are reportedly parked in front of the hospital.  This base is in clear violation of international laws and AAPP is concerned about the threat this Battalion poses to all people. Severe and effective action of the international community only will hinder the military’s inhumane acts.

We are concerned that the military battalion and so-called police will commit night-time raids to detain supporters of democracy in the ward near this hospital since stationing there. Last night, three people including Dr. Hein Htet Soe from Insein hospital were detained for participation in CDM, as well as local community guards in some quarters in Yangon. Last night, a regiment of nearly 100 military troops dug up the tomb of fallen hero, Ma Kyel Sin, a 19 year old girl who was shot dead in head by the military at a protest, the body was said to have been investigated to dispel the evidence of the military’s clear crimes.

The military-backed Union Solidarity and Development Party similarly commits grave crimes in the open. Yesterday morning, a group led by a USDP-member hacked the PwintPhyu township NLD chairman in Magway Region and a 17 year old youth. The victims died on the spot.