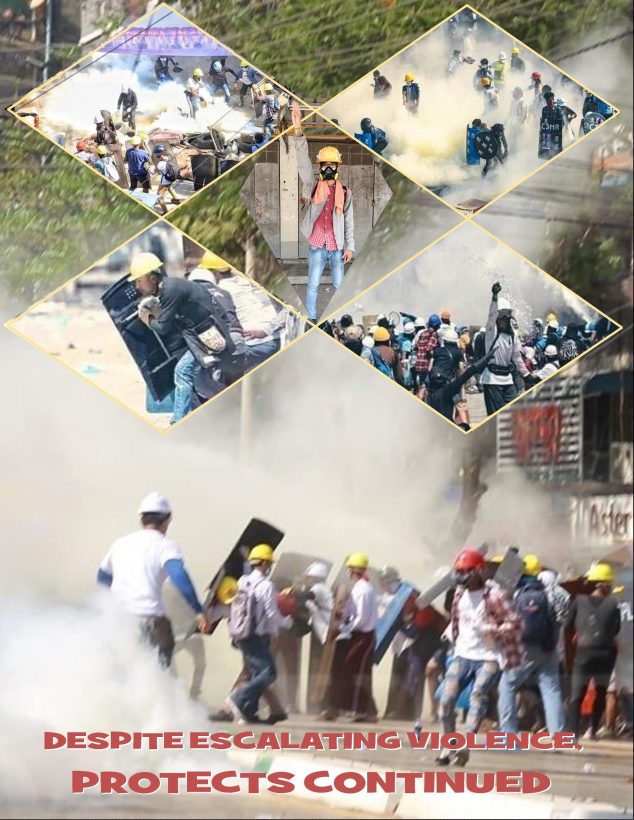 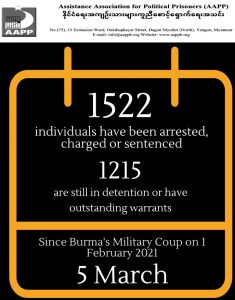 The Assistance Association for Political Prisoners (AAPP) pays respect to the heroes who sacrificed their lives and liberty to fight for democracy, human rights and dictatorship to an end. We also honour Zaw Myo from Mandalay who today sacrificed his life fighting against dictatorship. Up until now, more than (50) people have been killed due to the violent and arbitrary crackdowns.

As of March 5, a total of (1522) people have been arrested, charged or sentenced in relation to the military coup on February 1. Of them, (3) were convicted; (2) to two years imprisonment, (1) to three months. (61) have been charged with a warrant and are evading arrest, (307) were released. A total of (1215) are still under detention or have outstanding charges/evading arrest, including the (3) sentenced.

In today’s detainee list, we received and documented the names of (1) people. However, more than 20 protestors including students and youths were arrested during the crackdown across the country. We will continue to investigate these and make appropriate announcements when.

Dr Sa Sa as Special Envoy of the CRPH to the UN, sent a letter to the UN Security Council through the UN Secretary General demanding the Responsibility to Protect (R2P) mandate be implemented on 5 March at the UNSC closed meeting. Direct diplomatic intervention which includes and may broaden on sanctions, embargoes and monitoring must be enforced. R2P is clearly pertinent to the crimes against humanity once again being committed by this military. The military junta is a widespread and systematic policy directed against civilians, including but not limited to the arbitrary detentions and intentional killings of peaceful protestors.

On March 5, people in Burma continued to make their voices heard against the dictatorship with mass protests across the country, violent crackdowns and blockades particularly occurred in Hlaing, Tamwe, Insein, Sanchaung, North Okkalapa, South Okkalapa and Thaketa Townships in Yangon, Pathein in Ayeyarwady, and Mandalay City. 7 were arrested in North Okkalapa Township. In other parts of the country, so-called police and military carefully monitored and intimidated public demonstrations.

In one incident in Mandalay City today, military personnel placed banners on their vehicles which wrote “if you do not scatter, we will shoot with real bullets”. A 20-year youth in Mandalay was shot dead in the neck by so-called police and military. This is a threatening posture against the people and exposes the inhumanity and no respect of human rights by the junta regime.

In Sein Pan Road, Yin Pone Ward in Mandalay, the military opened fire on some houses, entering empty residences they smashed cars and belongings, and stole valuables (e.g. gold) and cash. Police assaulted residents’ houses at 35th and 86th Street with rubber bullets and slingshots for allegedly giving assistance to peaceful protests. The armed junta personnel also shot and detained a man, and attacked and detained two others.

Peaceful protestors are now vulnerable to being shot at any time. The military is meant to protect people, in Burma they want control and will kill unarmed civilians to keep it. People are vulnerable to looting, they have no peace or security, they are victims of a terrorist regime.

On 5 March, the so-called police and military stormed the Tachileik District People’s Hospital through the front door and raided every room in the hospital. Access to medical treatment during detention is essential, during this attempted coup, the junta has detained the elderly and those with health conditions. The at-risk detainees have little chance of receiving medical treatment. Win Htein, an 82-year-old NLD patron currently under detention, suffers from high blood pressure, diabetes, heart and thyroid disease and is confined to a wheelchair. His second court hearing was held today, the trial was adjourned until 19 March. His lawyer Min Min Soe said Naypyidaw detention center officials had not allowed visitation rights or to obtain a copy of his medical records to submit to the court. This is physical and psychological repression of a prominent political figure. In dictatorships, detainees are deprived of such basic freedoms.