4 March 2021 Daily Briefing in Relation to the Military Coup 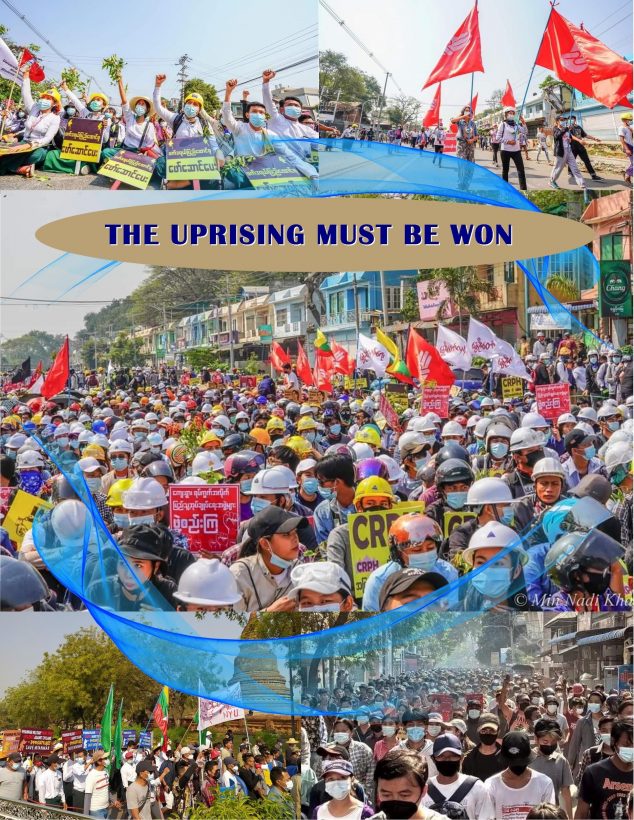 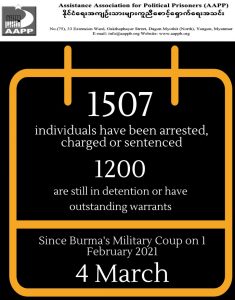 The Assistance Association for Political Prisoners (AAPP) pays respect to the heroes who sacrificed their lives and liberty to fight for democracy, human rights and dictatorship to an end. The funeral of many were held today in the aftermath of the massacres by the junta regime yesterday. 19-year-old Kyal Sin, the young girl was honoured today. Up until now, more than (50) people have been killed due to the violent and arbitrary crackdowns.

As of March 4, a total of (1507) people have been arrested, charged or sentenced in relation to the military coup on February 1. Of them, (3) were convicted; (2) to two years imprisonment, (1) to three months. (61) have been charged with a warrant and are evading arrest, (307) were released. A total of (1200) are still under detention or have outstanding charges/evading arrest, including the (3) sentenced.

In today’s detainee list, we received and documented the names of (4) people. However, in Yangon alone, more than 20 protestors including students and youths were arrested during the crackdown and were detained in Kyaikkasan Stadium, in total 800 people detained across the country. We will continue to investigate these and make appropriate announcements when.

Yesterday, the military and so-called police cracked down brutally using live ammunition against peaceful protests to bring them to an end. Despite the  terror, people across Burma continue demonstrating with courage today. There were violent crackdowns in Thingangyun, South Okkalapa, Sanchaung, North Dagon, Ahlon, Tamwe and Insein Townships in Rangoon, Pathein in Ayeyarwady, Pyinmana in Naypyitaw, Pyay in Bago Region, Hpakant in Kachin State, and some injuries and arrests. Similar weapons of tear gas, flash grenades, and water canons, and rubber bullets were deployed against peaceful protests today.

Yesterday, in North Okkalapa township, Yangon, the military and so-called police gunshot, beat and arrested. Simultaneously, tear gas was fired from fighter jets against residential city homes in North Okkalapa, Yangon yesterday evening. Again today, fighter jets were spotted by residents flying over Mandalay in the morning of 4 March. Since last week soldiers have been spotted scouting and aiming sniper rifles towards peaceful protests in Yangon and Mandalay. Junta sponsored terrorism is threatening a massacre against peaceful demonstrations calling for democracy and overthrow of the military dictatorship. The junta attempted to create disorder and instability at the outset of the coup to show the international community that any demonstrations and crackdown were an internal affair. But this did not work, so the military is turning to more brutal methods.

Last night around 11pm junta personnel raided a charity organization in Yangon which provides free funeral services to people who would not otherwise afford it was raided by junta personnel. Approximately 30 staff, including famous actor Tun Ko Ko, were severely beaten, and two staff members in critical condition. Moreover, junta personeel looted and destroyed equipment and supplies and smashed the car. Severe assaults against volunteers, philanthropists, and medical staff demonstrate THE JUNTA COUP IS  A TERRORIST ORGANIZATION.

At the closed UN Security Council meeting on March 5, we urge the UN Security Council to take stern and strict diplomatic intervention tomorrow on 5 March. If there is no effective action, it would be a disrespect to the people of Burma who are putting their lives and liberty on the line against a brutal military which is again exposing itself to the world for the institution it really is.