3 March 2021 Daily Briefing in Relation to the Military Coup 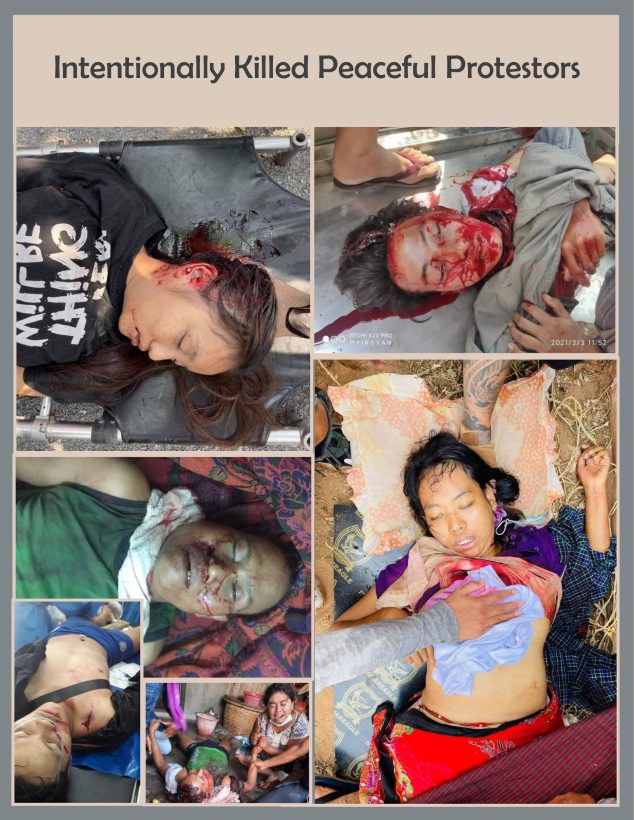 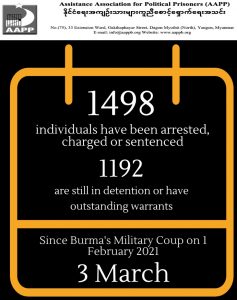 As of March 3, a total of (1498) people have been arrested, charged or sentenced in relation to the military coup on February 1. Of them, (4) were convicted; (2) to two years imprisonment, (1) to three months and (1) to seven days. (61) have been charged with a warrant and are evading arrest, (306) were released. A total of (1192) are still under detention or have outstanding charges/evading arrest, including the (4) sentenced. Up until now, more than (50) people have been killed due to the violent and arbitrary crackdowns.

In today’s detainee list, we received and documented the names of (183) people. However, in Yangon alone, over 400 protestors were arrested during the crackdown and were detained in Kyaikkasan Stadium, in total 800 people detained across the country. We will continue to investigate these and make appropriate announcements when.

In North Okkalapa Township today, so-called police and military soldiers set fire to tires across the road and four volunteers from the MonMyatSeikHtar Ederly Care Charity vehicle were viciously beaten with guns to the heads. Among them, one of them passed away due to serious injuries.

The military and so-called police are making an enemy of the peaceful protestors, terrorising and directing their guns towards peoples face, chest, head, back and abdomen. The armed personnel directed random shots towards the crowd of peaceful protests in an intentional manner. They dragged dead bodies and forcibly detained injured people, neglecting any medical care, violently beating and arresting people, shooting randomly into people’s houses with no reason, looting and arsoning public property. The junta regime commits these acts every day against peaceful protestors and the general public. Nowadays, the public areas turn into battle fields as well as killing fields.

Much evidence clearly shows that police and military act as terrorists, they have no respect for human dignity or humanity, only brutality. They do not comply with domestic or international laws and morals. They violate every standard, the junta coup terrorist must be held  accountable for every crime they commit.  Strong and effective action against the juntas violations must be taken as soon as possible, until then Burma’s people will continue to be victims.

In Taungdwingyi township last evening, Magway Region, Ko Thiha Zaw (a.k.a Naung Naung), a 16-year-old, was killed because the military shot live ammunition at the youths. Some youths were injured and arrested and their motorbikes seized.