2 March 2021 Daily Briefing in Relation to the Military Coup 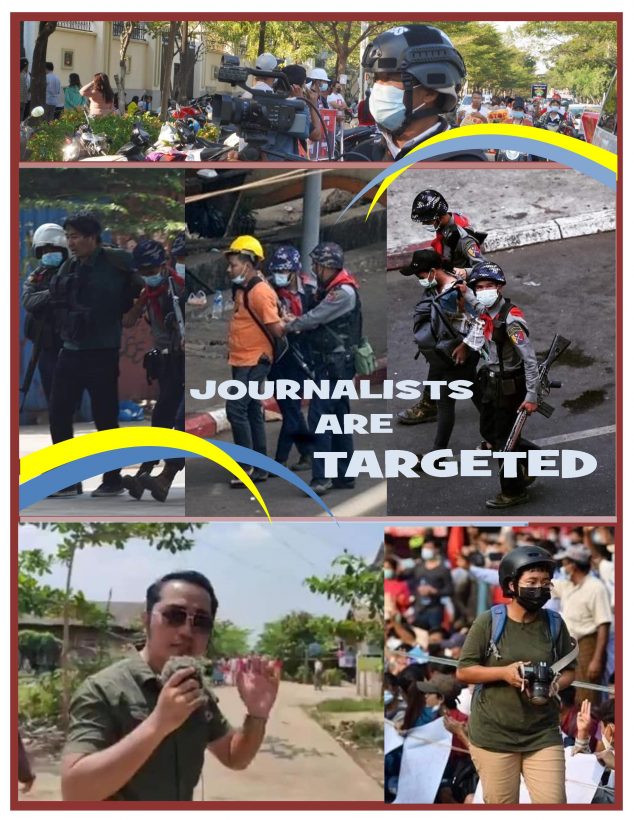 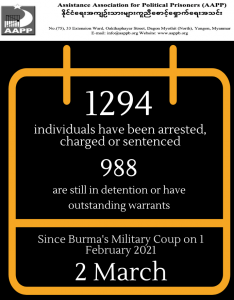 As of March 2, a total of (1294) people have been arrested, charged or sentenced in relation to the military coup on February 1. Of them, (4) were convicted; (2) to two years imprisonment, (1) to three months and (1) to seven days. (61) have been charged with a warrant and are evading arrest, (306) were released. A total of (988) are still under detention or have outstanding charges/evading arrest, including the (4) sentenced. Up until now, approximately (30) people have been killed due to the violent and arbitrary crackdowns.

In today’s detainee list, we received and documented the names of (16) people. However, we understand approximately one hundred people were arrested across Burma today. We will continue to investigate these and make appropriate announcements when. 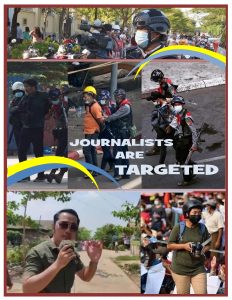 It was on 2 March when the Revolutionary Council led by General Ne Win seized power fifty-nine years ago, the military would rule the country through successive junta regimes up until 2015. Since that time, the military has now seized power from a democratically elected government for a third time. People from all sections of society are continuing to fight against dictatorship with mass demonstrations, the reaction has been a brutal repression practiced by successive junta regimes. Journalists and independent media are now being suppressed for covering incidents on the ground. The junta has threatened to crackdown on any media using the word ‘coup’ to describe the junta. Security forces are violently persecuting and detaining journalists, assaulting them with batons and using their guns. Ko Kaung Myat Hlaing (a.k.a Ko Aung Kyaw), from Democratic Voice of Burma, based in Myeik, was violently detained by security forces at 10:45pm of 1 March, he was pelted with stones and gunshots were fired at his home.

This repression is obstructing the flow of accurate information and news, the coup regime wants to cover up their terrorist acts. In Burma, journalists are subject to violent attacks and arrest even if they are clearly marked ‘PRESS’ or carry media outlet insignia. Journalists are not detained during protests in other countries, but in Burma they are. As of now up to (34) journalists have been arrested and some prosecuted, among them, only (15) have been released. Section 7 (a) (b) of the News Media Law of Myanmar provides legal protection for journalists, AAPP strongly condemns the arrest and prosecution of the journalists. The international community must call for immediate release of the arrested journalists and ensure their freedom to report and inform the public.

The general public across the country were brutally dispersed using flash bang grenades, smoke bombs, water cannons, rubber bullets and live ammunition. Particularly today in Kalay Township, Sagaing Region, so-called police and military shot live ammunition at and hit seven civilians, three are currently in serious condition, 13 were in total injured. A similar crackdown with rubber bullets happened in Taunggyi Township, Shan State, and Hlaing, Insein, Sanchaung, Tamwe and Mingalar Taung Nyunt Townships in Yangon. More than ten civilians were injured and 13 arbitrarily arrested. In Sanchaung Township, soldiers hid and directed their G3 rifle guns at protestors. The soldiers and so-called police commit these aggressive acts of torture willingly. The demonstrations are treated like counter-insurgency operations, the country is in a very perilous place, the peace and security of the public is in daily danger from the coup regime’s use of live ammunition and lack of restraint. The junta must be accountable for various human rights violations, and the international community must take swift action, if it does not, the peace and security of all people in Burma will remain in danger.

Civil servants participating in CDM were again threatened today with violent detentions. On 1 March, 12 civil servants from the Union Government Office participating in CDM were fired from their job assignments. This morning, security personnel without uniform arrived in two unmarked  cars and at gunpoint abducted Sayar Dr. Arkar Moe Thu from the Department of Oriental Studies, University of Yangon at a gathering point for the All Universities Teachers Strike, at the Hlaing Campus. Police cars then arrived at the gathering point and violently dispersed the crowd.

Clearly the civil disobedience movement is disrupting the coup council’s ability to govern, hence the junta regime is raiding houses and violently detaining without warrants, and filing distorted legal lawsuits towards a public participating in and supporting civil disobedience.

The illegitimate detentions are conducted by personnel without uniforms, moreover the junta is using the law as it desires, to oppress and torture the public, and crackdown on peaceful protests using live ammunition and snipers. AAPP affirms that such acts are a clear and present crime against humanity. We thoroughly support the cabinet formed by the Committee Representing Pyidaungsu Hluttaw (CRPH).