1 March 2021 Daily Briefing in Relation to the Military Coup 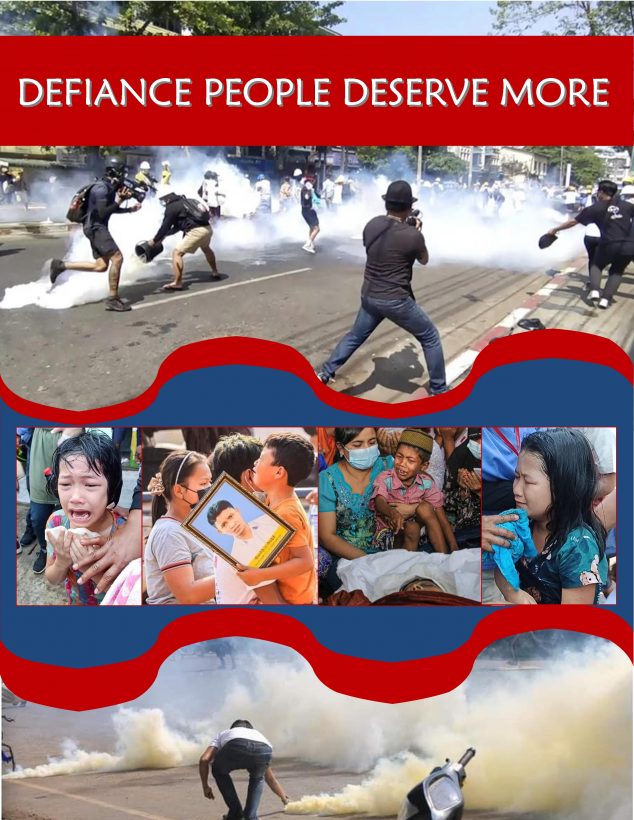 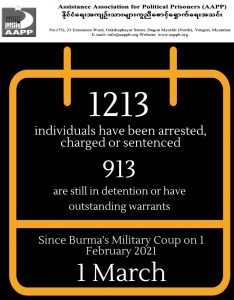 In today’s detainee list, we received and documented the names of (18) detained people. However, we understand approximately one hundred people were arrested across Burma today. We will continue to investigate these and make appropriate announcements when.

As of March 1, a total of (1213) people have been arrested, charged or sentenced in relation to the military coup on February 1. Of them, (4) were convicted; (2) to two years imprisonment, (1) to three months and (1) to seven days. (61) have been charged with a warrant and are evading arrest, (300) were released. A total of (913) are still under detention or have outstanding charges/evading arrest, including the (4) sentenced. Up until now, approximately (30) people have been killed due to the violent and arbitrary crackdowns.

Protestors and journalists in Yangon were met with rubber bullets and tear gas today. Security forces blocked the main roads  of Anawrahtra and Bogyoke Aung San in downtown Yangon. The demonstration on Insein Road near Hlaing Station Road was suppressed on four occasions using tear gas, rubber bullets and flash bangs. One protester was detained and junta personnel tried to arrest protesters entering homes and tea shops. Protesters were also cracked down on in Kyun Taw street and Padonmar street, Sanchaung Township where at least 20 protesters were arrested. Residents near Taungoo Hospital who tried to block its opening as part of the CDM were also violently cracked down on. In Monywa, one police vehicle, one army vehicle, and a water cannon arrived with around 50 security forces to disperse the crowds, moreover they also shot at the homes. Riot police charged at a rally on the morning of March 1 in Magway’s Old Quarter to disperse and detain those at a gathering protest. 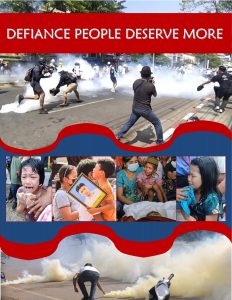 The military wants to indoctrinate a climate of fear among the people, the streets have become like combat zones just as Arakan, Kachin, Shan and Karen States have witnessed for decades. The purpose of all this has been to create fear and compliance to the military. These crackdowns clearly defy the Geneva convention and universal declaration of human rights and constitute torture, but an international response has not been unanimously opposed to the attempted coup. The military’s response to peaceful protestors today again demonstrates they want power, and are willing to commit human rights abuses to keep it. Burma’s democratically elected State Counsellor and President court hearing was held by video conference today. During this they were charged under Penal Code Section 505(b) and Telecommunication Law Section 67. Already in the previous hearing Daw Aung San Suu Kyi had been charged under the Export and Import Law and Natural Disaster Management Law, and U Win Myint had been charged under Natural Disaster Management Law. The various lawsuits intend to impose long-term sentences on politically influential and democratically popular leaders, following in the footsteps of the previous junta regime. This comes a day after Burma’s ‘Bloody Sunday when scores were killed and injured in peaceful protests.

A UN Security Council unanimous statement on 4 February announced “deep concern” of the attempted coup and called for the “immediate release of the country’s elected leader, Daw Aung San Suu Kyi, and President U Win Myint”. The Human Rights Council emergency meeting on 12 February continued the trend of words not deeds. At the UN General Assembly an informal meeting was more significant for its substance when the Special Envoy denounced the “illegitimate coup” whilst regional countries and Russia and China hid behind talk of  the attempted coup being an internal affair even though it affects the peace and security of the entire region. On March 2, ASEAN Foreign Ministers will meet via video conference to discuss Burma. But as seen above, the military has ignored all international appeals so far. The international community has not been doing enough to press the junta to reverse the attempted coup. Statements are not enough, action is sorely needed. At the very least, strong diplomatic intervention is demanded.