25 Feb 2021 Daily Briefing in Relation to the Military Coup 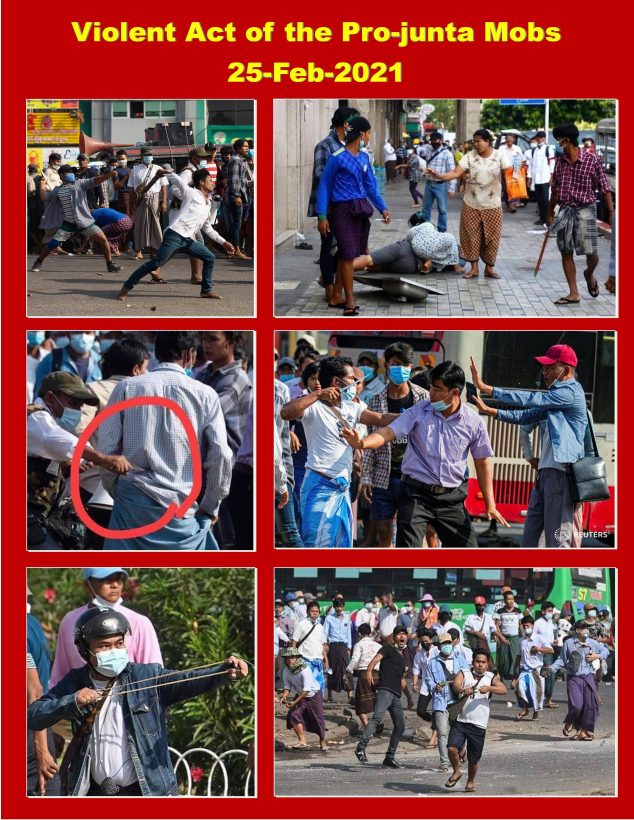 A man who announced he was Mingalar Taung Nyunt Township USPD Chairman came with many police, he put pressure on the people to release an alleged Party Secretary and Party members the residents had arrested. But the residents explained they had already released the detained to another police force not accompanied by the so-called Chairman. When the media asked why  supporters were being violent, the apparent USPD Chairman responded angrily, and some of his followers were violent towards the reporters, breaking two camera equipment of the reporters and throwing verbal insults. Police did nothing towards these violent acts, they stood by and brought the Chairman and his followers back.

During pro-military rallies in the days leading up to the military coup, bamboo poles were sharpened and slingshots crafted. Military supporters carried these to make threatening gestures in the streets.  On January 30, in Bahan Township, Yangon outside a Kyay Thun Statute, protesters clashed with some civilians at a pro-military demonstration.  Some people who were there got into a verbal altercation. Then some bystanders were beaten, while others were hit on the head, and one’s NLD-branded shirt ripped off. In the aftermath of the coup, similar mobs marched in groups with vehicles in a show of force and demonstrative will to commit violence. They threatened cars with the image of the NLD and Aung San Suu Kyi, and car windows were smashed in a clear intimidation towards the general public to stop peacefully protesting in Bahan Township.

This morning, during a meeting of the Rangoon University Students Union, the police deployed security vehicles to occupy the campus. Outside of the university, 2 police vehicles, 8 military trucks and 2 water cannons were deployed which quickly escalated tensions among the people.

On 24 February in Taungtha Township of Mandalay Region the military raided the UEC regional office and took some documents and materials. Chairman and Secretary of Taungtha Township election sub-commision have also been detained, their whereabouts are still unknown.

Mandalay Region Chief Minister Dr Zaw Myint Maung’s wife Dr Yu Yu May and family members were released from house arrest on the evening of February 24. Dr Zaw Myint Maung has been charged under Section 505(b) of the Penal Code by the coup regime in Aung Myay Thar San Township Court, Mandalay.

In Dawei, Tanintharyi Region, Daw Moet, the wife of Deputy Director of the Department of Mines Thar Myat Kyaw, who lives in Byaw Tawwa Ward, was violently arrested by police on February 24 and charged under Penal Code Section 505(a) for posting social media posts criticizing the military coup. Also in Dawei, four persons, Moe Thu Aung and Tu Tu, Chan Myae Naing and Ye Kyaw Phyo of the Student Union, were arrested in the early morning of February 25 for leading a protest against the military coup. This is in addition to many more who were fined for participation.

The coup regime is intentionally trying to instigate riots and create instability by promoting violent thugs to march and crush peaceful protesters. The military is changing its crackdown tactics on the peaceful protestors, trying to create anarchy and riots against residents in order to take a position of authority amidst the instability. The military is creating violence and a climate of fear. The junta will step in to claim it is restoring security and order from a disorder of riots they created. In a democracy the police should be protecting peaceful protesters, but in Burma the police violently supress them, and the police support acts of pro-junta terrorism. These violent events are considerably similar to those during the 88 uprising. Yet the events today are even more stark than during the 88 uprising, captured on video and photographs.

As of February 25, a total of (748) people have been arrested, charged or sentenced in relation to the military coup on February 1. Of them, (4) were convicted; (2) to two years imprisonment, (1) to three months and (1) to seven days. (56) have been charged with a warrant and are evading arrest, (62) were released. A total of (686) are still under detention or have outstanding charges/evading arrest, including the (4) sentenced. From February 1 to February 25, a total of (8) people have died from violence including at peaceful protests.

If you receive any information about arrests/detentions of CSO leaders, activists, journalists, civilians and workers who have joined in CDM in relation to the military and police crackdown on dissent. Please submit to the following addresses: