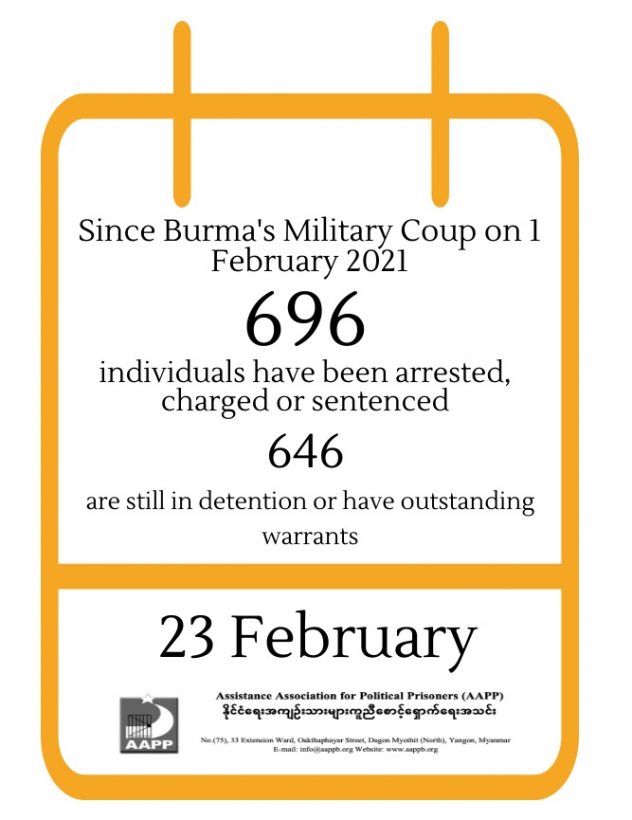 On February 22, the EU Council adopted conclusions which unanimously condemned the military coup in Burma. And in similar style to the UN Secretary General’s comments, the EU pledged “stands with the Burmese people” to the “restoration of the legitimate civilian government”, and to “immediately and unconditionally release” Burma’s democratically elected leaders and all detainees. Broad swathes of the international community have now committed statements to the democratic cause in Burma and the demands of the protest movement.

Two members of the Military Affair for Security (‘Sa Ra Pha’), aimed guns and also tried to capture people coming back from the demonstrations, creating a riot-like incident.

Around 8pm yesterday, a five year old child was hit and cut on his scalp due to a slingshot from a military vehicle in front of Aung Nang Roman Catholic Church. It was said the child was simply gazing at the convoy of vehicles.

At an untimely hour yesterday in Bomyathtun Street, Botahtaung Township, Yangon Region, troops of security forces blocked housing No1 and searched for certain workers who allegedly joined the Civil Disobedience Movement (CDM). However, they were not captured or arrested as intended.

On 22 February, Kayah State, Phruhso Township Administration Department issued a statement saying fourteen workers who joined the CDM were to be dismissed from their jobs. 14 employees, including an high level clerk, of Shwepyithar Township administration department, Yangon Region, were temporarily dismissed from their jobs for engaging in the CDM. In another of today’s incidents, at 12:30pm, a female  motorcyclist-demonstrator was wounded from a slingshot coming from a military convoy, in Myitkyina Township, Kachin State.

As for arrests and charges , Dr. Aung Moe Nyo, Chief minister of Magwe Region Government, was charged under Section 505(b) of the Penal Code. Separately, U Kyi Win, owner of Cho Kyi Thar music production was charged under Section 212 of Penal Code for hiding U Lu Min, actor and director, who had evaded police arrest. Furthermore, U Dar Shi Lasai, Minister of Natural Resources and Environment in Kachin State, has been detained in Myitkyina prison.

195 students and civilians who were arrested in Pyinmana and Zabuthiri Townships, Naypyidaw were released today, except 6 who remain under detention and will soon be charged under section 25 of the Natural Disaster Management Law.

As of February 23, a total of (696) people have been arrested, charged or sentenced in relation to the military coup on February 1. Of them, (4) were convicted; (2) to two years imprisonment, (1) to three months and (1) to seven days. (36) have been charged with a warrant but are evading arrest, (4) others have been charged but not detained, and (5၀) were released. A total of (646) are still under detention or have outstanding charges/evading arrest, including the (4) sentenced.