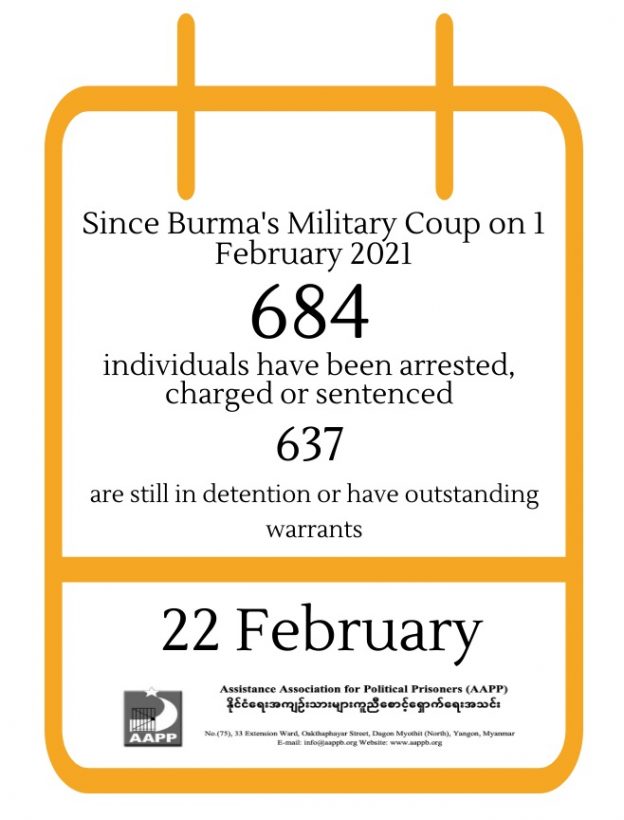 A general strike immersed Burma today on the auspicious 22/02/21, millions joined across the country, some businesses closed in support of the demonstrations. At night under the cover of the now-regular internet blackouts (extended to 1am to 12pm in Yangon today) over Burma, military convoys reportedly entered major residential areas and set up blockades on the streets of embassies in Rangoon where major demonstrations have occurred.

At the UN Human Rights Council today, The UN Secretary-General,  António Guterres, spoke on the situation in Burma saying “I call on the Myanmar military to stop the repression immediately. Release the prisoners. End the violence. Respect human rights, and the will of the people expressed in recent elections. I welcome the resolution of the Human Rights Council”.

As for arrests and charges today, Nyi Pu, Chief Minister of Rakhine State was charged under Section 505(b) of the Penal Code by U Kyaw Thein, Deputy Administrator of the Sittwe Township General Administrative Department at Sittwe Township Court. The hearing was held by video conference, and the next court hearing was adjourned until 4 March 2021.

In Naypyidaw videos show protestors being chased by security forces and bundled into police vehicles. Dozens including five engineers are reported to have been detained in this disproportionate use of force against street demonstrators. Moreover, police forcibly arrested a civilian in Myawaddy, Karen State.

At night of 11:30pm yesterday, while activists and youths, who had drawn “WE NEED JUSTICE”, evaded being arrested at the cemetary in Mohnyin Town, Kachin State, the army surrounded the cemetery to detain them, two were arrested. In addition, Zaw Zaw Linn, Chairman of Mohnyin University Student Union, and Banyar, a freelance reporter, were charged under Section 25 of the Natural Disaster Management Law.

As of February 22, a total of (684) people have been arrested, charged or sentenced in relation to the military coup on February 1. Of them, (4) were convicted; (2) to two years imprisonment, (1) to three months and (1) to seven days. (34) have been charged with a warrant but are evading arrest, (3) others have been charged but not detained, and (47) were released. A total of (637) are still under detention or have outstanding charges/evading arrest, including the (4) sentenced.