21 Feb 2021 Daily Briefing in Relation to the Military Coup 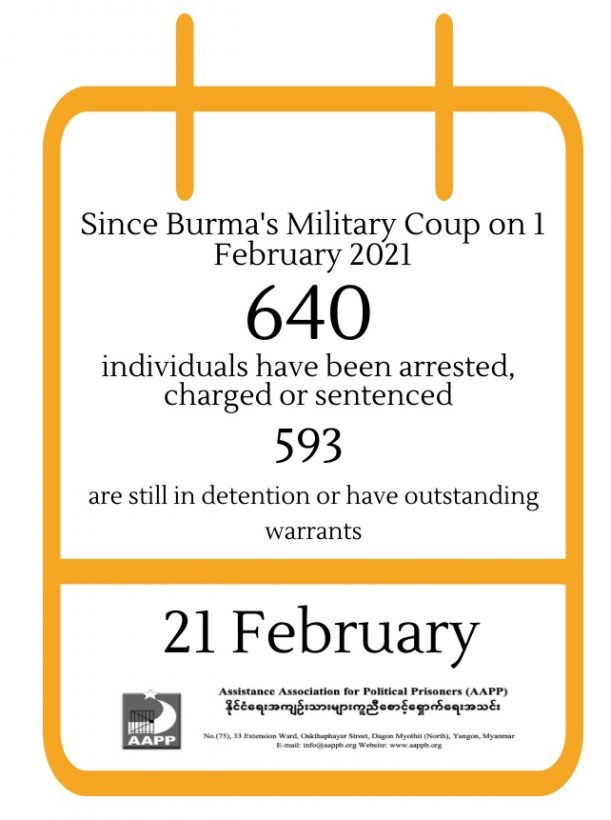 On 20 February, ten EAOs who had signed the Nationwide Ceasefire Agreement announced they would support the civil disobedience movement. This is a significant step, it demonstrates the support for democracy, and against dictatorship across Burma’s many different groups. Then today, the Committee Representing Pyidaungsu Hluttaw (CRPH) released a statement condemning the use of live ammunition against peaceful protestors, in addition saying the brutal attacks against ordinary people were totally disproportionate. The CRPH vowed to “engage with the international community… to bring justice according to international law”.

The police and military brutally crackdown on protests in Mandalay during the day and created  unrest and instability at night across the country. The military junta violently disrupted peaceful protesters in contravention of international standards. The junta is deliberately carrying out acts of public instability such as arresting people organizing participation in the civil disobedience movement or other protests, intimidating their lives, and committing arson attacks at night.

At around 8:30pm last night, three gunshots were fired in a residential area, people banged their pots and pans in protest and some soldiers destroyed the doors to intimidate them in Pyay Township, Bago Region. A fire broke out during the night in Pyapon Township, Ayeyarwady, Mudon and Mawlamyine, Mon State, and Moenyo Township, Bago Region.

Last night at around 11 pm, a civilian guarding the security ward was shot and killed on the spot  in 15th quarter Tawunpu, Shwe Pyi Thar Township, Yangon Region. According to the residents, the shot came from a security forces vehicle, they heard three shots and found three bullet casings.

Furthermore, the police force and military stormed the house of U Lu Min, a famous actor and director, in Yangon (Rangoon). He was abducted from his house according to his wife’s live stream on social media. Five youths from Putao town in Kachin State were also arrested by the military, In Magway town, Lower House Representative, U Myint Oo, living in Sone Quarter, was arrested at the same time as the 8pm banging of pots and pans by residents.

As of February 21, a total of (640) people have been arrested, charged or sentenced in relation to the military coup on February 1. Of them, (4) were convicted; (2) to two years imprisonment, (1) to three months and (1) to seven days. (32) have been charged with a warrant but are evading arrest, (3) others have been charged but not detained, and (47) were released. A total of (593) are still under detention or have outstanding charges/evading arrest, including the (4) sentenced.