Daily Briefing in Relation to the Military Coup 20 Feb 2021 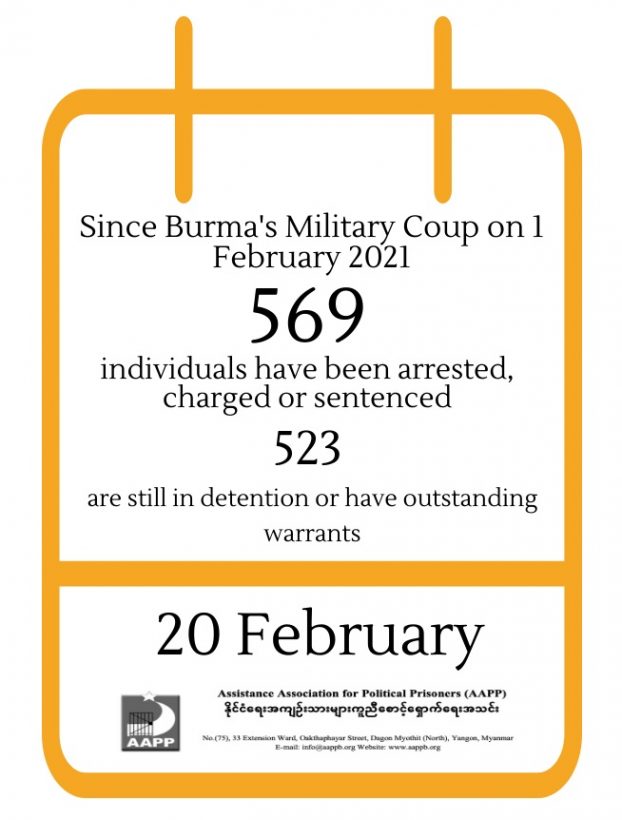 On 20 February, the public demonstrations were brutally cracked down by the police and military.

This afternoon in Mandalay, security forces overrun Yadanarbon Shipyard of Domestic Transportation and forced civil servants participating in CDM to work. The residents thus gathered to protest when they  were then brutally crackdown by security forces. The police and the military directed more than 100 gun-shots towards the protestors. The shots included not only rubber bullets but also live ammunition, as well as tear gas. The security forces used slingshots against the crowds by sling-shots loaded with Kone Thee (a metal object in triangular shape of steel). This metal was scattered along the road in order to harm the dispersing people. two civilians were killed, one’s head was blown off. According to initial reports (to be confirmed), 35 civilians were badly injured and 17 are in critical  condition. Among the injured, one man is in a serious situation after getting hit in the abdomen by a real bullet. An elderly woman was beaten and her head broken by the police and the military. Another man was also shot in the buttock. The detained victims number around 20 and some social relief vehicles were shot at as well.

Such acts of brutal repressions against a defenseless public are extreme violations of human rights and the perpetrators must be appropriately punished. Article 353 of the 2008 Constitution states “No one shall be subjected to arbitrary interference with his privacy, family, home or correspondence, nor to attacks upon his honor and reputation.” Article 354 states, “Freedom of expression and association and peaceful assembly without weapons shall be guaranteed”. The junta’s crack-down is in absolute disregard to this  domestic law. Furthermore, Section 5(b) of “Basic Principles on the Use of Force and Firearms by Law Enforcement Officials of the United Nations” states “police must minimize damage and injury, and respect and preserve human life”. We strongly condemn such brutal violent crack-down as non-compliant to fundamental human rights and democratic standards.

This morning in Moggok township, Mandalay Region, strike leader of 88 Generation Peace and Open Society, U Soe Htay’s house was forcibly stormed by some 30 police and military personnel and the VaMon village administrator. U Soe Htay and a monk from Yaypu Monastery were charged by Section 505(a) of the Penal Code.

As for arrests and detentions, Minister Dr. Myint Naing and Attorney-General U Khin Maung Hla of Sagaing Region were reportedly transferred to Monywa prison charged  under Section 505(b) of the Penal Code  for defamation against the state.

At about 12:00am on 18 February, the police and military surrounded a house in Aung Chanthar quarter, Warrr town, Pegu Region and the owner, U Tin Tun Aung and his wife Daw Ni Ni Oo and the son, Ko Phyo Aung were beaten and abducted.

Astrologer (Ko) Hein Min Aung a.k.a Lin Nyoe Tar Yars family members  are worried about his health conditions because he is in danger of a heart attack and can only breathe when given oxygen.

As of February 20, a total of (569) people have been arrested, charged or sentenced in relation to the military coup on February 1. Of them, (4) were convicted; (2) to two years imprisonment, (1) to three months and (1) to seven days. (33) have been charged with a warrant but are evading arrest, (3) others have been charged but not detained, and (46) were released. A total of (523) are still under detention or have outstanding charges/evading arrest, including the (4) sentenced.