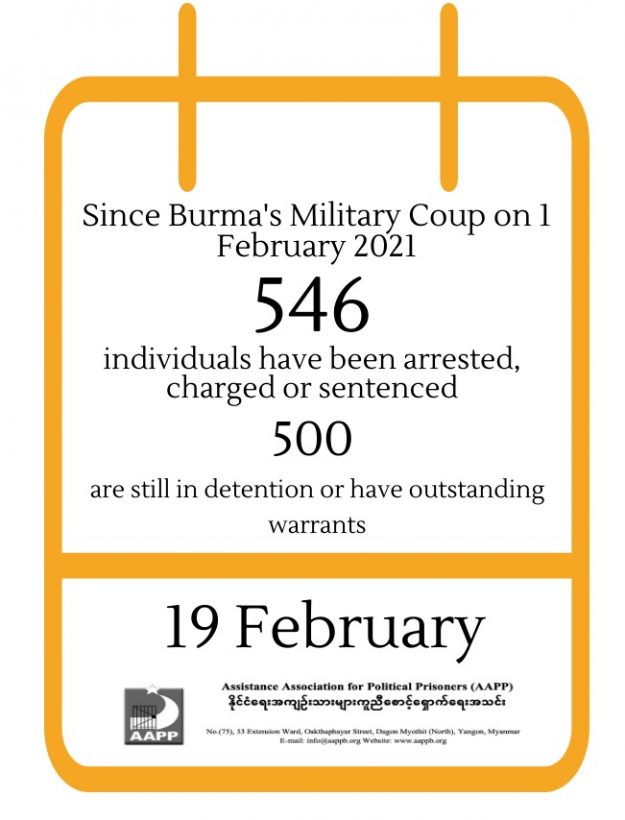 As the anti-coup protests across states and regions continued to engulf the country  on February 19, so have violent crackdowns and arrests by the junta. 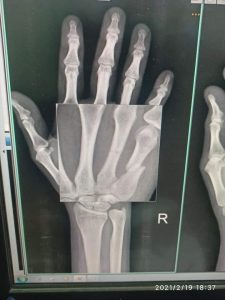 This morning, the police forces beat and forcibly arrested two female teachers who were gathering in front of Myitkyina Education College, Kachin State to take part in the civil disobedience movement. Protestors were blocked by the police nearby Myitkyina Myoma market and 11 civilians were detained. In addition, the police directed slingshots towards the public who took photographs as record. The detained two female teachers and 11 civilians were reportedly released this evening. Upon their release, those two teachers who were arrested in Myitkyina were beaten and one teacher Daw Aye Aye Kyi Sein’s arm was broken.

Another incident in Myitkyina was when anti-coup protestors were intimidated and threatened at gunpoint and sling-shot by the police and the military yesterday. As a result, two protesting youths and a monk from Mandalay Monastery were arrested. The student strike leaders living in Kyat Sar Pyin quarter, Dawei town, Tanintharyi Region, were abducted by the police at around 10:30pm last night, therefore, the residents stood with the students by banging pots and pans. But the police then shot some six gunshots at the crowd; causing three male residents to be injured. Also, this evening, Ko Aung Thet Paing from Pathein Student Union was arrested.

In Yangon Region 11 people who protected staff participating in CDM from the fertilizer factory in Myaung Taka Industrial Zone, Hmawbi were charged, they are currently evading arrest.

Sa Aung Moe Hein who lives in 8th Quarter, Hlaingbwe town, Kayin State was sentenced to seven days in prison for banging the pots and pans at his home in opposition to the military dictatorship.

Yesterday,  Dr.Zaw Myint Maung who is the Chief Minister of Mandalay, had his court hearing at the Aung Myay Tharzan Township Court, Mandalay via video conferencing, charged under Section 505(b) of the Penal Code. Zaw Myint Maung was arrested at the outset of the coup in the early hours of 1 February and is currently detained at Obo Prison. His lawyer said they have not been given visitation rights. Lack of trial rights for lawyers has become a signature of this military coup’s attempts to prosecute government officials. It is a clear violation of the international standards of the rule of law and exemplifies the judiciary’s compliance to the military coup.

As of February 19, a total of (546) people have been arrested, charged or sentenced in relation to the military coup on February 1. Of them, (4) were convicted; (2) to two years imprisonment, (1) to three months and (1) to seven days. (32) have been charged with a warrant but are evading arrest, (3) others have been charged but not detained, and (46) were released. A total of (500) are still under detention or have outstanding charges/evading arrest, including the (4) sentenced.